DIPLOMATIC MISSIONS IN THE PACIFIC: 3 (Australia, NZ and a Charge D’Affaires in Fiji)

Trade in the region 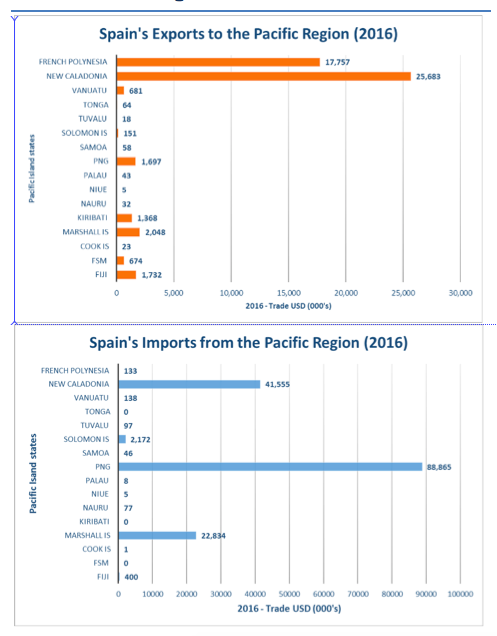 Between 2014 & 2016, Spain’s exports to the Pacific region decreased on average by 9.55% with a strengthening emergence of pharmaceutical products. Imports from the Pacific region has increased, on average, by 0.1%. Papua New Guinea coffee is a key direct import. Spain maintains a key fisheries interest in the Pacific region, as evidenced through the Spanish fishing vessels in Pacific waters as provided under the Kiribati – EU Fisheries Partnership Agreement. Spain, a leading global importer of frozen tuna loins, is host to a substantial portion of the EU’s domestic canning factories.

Spain gained non-permanent membership of the UN Security Council from 2015-16.

Climate Finance in the Pacific Region

Between 2010 and 2014 Spain contributed USD 1.35 million towards adaptation and mitigation projects in the region.