New Partnership Agreement between the Members of the Organisation of African, Caribbean, and Pacific States (OACPS), and the European Union (EU)

A new Partnership Agreement between the Members of the Organisation of African, Caribbean, and Pacific States (OACPS), and the European Union (EU) was initialed by the Chief Negotiators in Brussels, Belgium on 15 April 2021.

The initialing ceremony officially ended the Post-Cotonou Negotiations, launched in 2018 between the 27 States of the EU and the 79 States of the OACPS.

The new OACPS-EU Partnership Agreement, initialed by the Chief Negotiators on 15 April is available here.

The Forum Secretariat’s media statement on the initialing of the new Partnership Agreement is available here: https://www.forumsec.org/2021/04/16/initialoacpseu/

The Partnership Agreement is between 79 Members of the OACPS and 27 EU Member States.  Together, the two groups represent more than half of all UN member countries and unite over 1.5 billion people.

The purpose of the new Agreement is to: 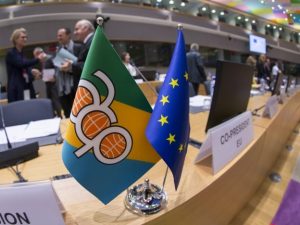 The Partnership Agreement is between 79 Members of the OACPS and 27 EU Member States.  Together, the two groups represent more than half of all UN member countries and unite over 1.5 billion people. 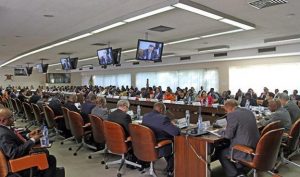 General Part of the Agreement and the Pacific Regional Protocol

The new Partnership Agreement is composed of a “common foundation” – the General Part of the Agreement, which sets out the values and principles that bring the countries together and indicates the strategic priority areas that both sides intend to work on. These are: (i) human rights, democracy and governance, (ii) peace and security, (iii) human and social development, (iv) inclusive sustainable economic growth and development, (v) environmental sustainability and climate change, and (vi) migration and mobility.

The Partnership Agreement also includes three action-oriented Regional Protocols for Africa, the Caribbean and the Pacific, negotiated with each region and tailored to each region’s needs. The Regional Protocols establish governance arrangements to manage and steer the relations with the EU and regional integration and cooperation.

The Pacific Regional Protocol is based on five areas of cooperation, reflective of the Blue Pacific’s development challenges and opportunities:

The next steps are for the OACPS and EU Parties to seek internal clearance for the signature of the Agreement.

The Agreement will then need to be signed and ratified. The signature is expected to be held in the second half of 2021, in Samoa.

Once in effect, the Agreement will serve as the new legal framework and guide cooperation as well as political and economic relations between the EU and the 79 members of the OACPS for the next twenty years.

The Cotonou Partnership Agreement is a comprehensive, legally binding framework outlining relations between the ACP countries in Africa, the Caribbean and the Pacific (ACP) regions and the European Union (EU).  It was signed in 2000 for a period of 20 years, based on three complementary pillars: development cooperation, economic and trade cooperation, and the political dimension.

The main aim of the Agreement is to reduce and eradicate poverty and promote the integration of ACP States into the global economy. It is mainly financed by the European Development Fund (EDF), a financial instrument outside the general budget of the European Union that has contributed significantly to the Pacific region both nationally and regionally with non-refundable financial assistance in the form of grants.

The Cotonou Partnership Agreement was to expire in February 2020 but has been extended until November 2021 to cater for the delays in the conclusion of the new partnership agreement between the EU and the Members of the OACPS.

The Post-Cotonou Negotiations for the new partnership agreement started in October 2018.

The OACPS and EU Negotiators

The OACPS Central Negotiating Group (CNG) for the Post-Cotonou Negotiations was composed of representatives from the three regions of Africa, Caribbean and the Pacific – led by the Hon. Robert Dussey, Minister for Foreign Affairs, Cooperation and African Integration of Togo. The Pacific region was represented by Papua New Guinea and Samoa at the Ministerial and Ambassadorial level in the CNG, with Samoa as the lead negotiator for the Pacific region. Fiji and Solomon Islands were the alternates in the CNG.

The Pacific Islands Representative to the OACPS and the European Union, based in Brussels provided support to the PACPS during the negotiations.

Priorities for the Pacific Region

A High-Level Dialogue between Pacific States of the OACPS and the EU Commissioner for International Development and Cooperation, Mr Neven Mimica, was held in Apia, Samoa, on 26 February 2019. At this meeting, PACP leaders articulated the following Pacific priorities for the Post-Cotonou Negotiations: 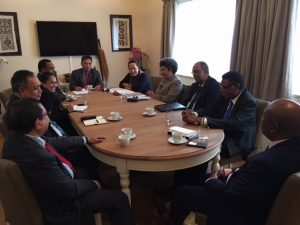 The Cotonou Partnership Agreement (CPA) was signed in 2000 for a 20-year period. The Agreement entered into force in April 2003 and will expire in November 2021.

Joint Public Consultation on a new partnership after 2020

Report on the Joint Consultation

Both sides get organise their mandates and directives for the negotiations

Report on the Joint Consultation

Anyone with an interest in the agreement is welcome to submit feedback or questions at any time by email or post.