“The single greatest threat to the livelihood, security and well-being of Pacific people”

Pacific Islands Forum Leaders have emphasised the need for action on climate change saying it is the single greatest threat to the livelihood, security and well-being of Pacific people.

The point was made often as Forum Leaders and Ministers addressed the the 73rd session of the United Nations General Assembly in September.

Samoan Prime Minister Tuilaepa Sailele Malielegaoi said “The Pacific region is already facing the destructive impacts of climate change and disasters. Cyclones, floods, droughts. Sea level rise and ocean acidification are taking their toll on the health and well-being of our peoples, environment and economies. Disaster related economic losses in Pacific island countries as a percentage of GDP are higher than almost anywhere else in the world.”

“Our people are waiting, the world is watching. It is incumbent on each individual leader and country to raise the level of ambition not just as an inspirational goal, but as deliverables of the Paris Agreement. For the Pacific peoples and our Blue Pacific region, urgent ambitious action on climate change is the only option.”

Prime Minister of Fiji, Honourable Frank Bainimarama, said “no government alone can combat climate change. The challenge is simply too great. That is why, from the beginning of Fiji’s presidency of COP23, I have sought to build a Grand Coalition of governments, the private sector, labour, religious groups and civil society to take initiative and bring forth ideas and solutions great and small.”

Prime Minister Bainimarama also urged for greater ambition to address climate change as countries prepare for the upcoming meeting of the Parties to the United Nations Framework Convention on Climate Change (COP24). He said, “The world has embraced the Pacific tradition of Talanoa – a tradition of open and honest dialogue, it will help to raise our collective ambition. But ambition without action—without a plan—is just talk. The Talanoa Dialogues will reach a crescendo in Katowice at COP24. We cannot let Katowice fail. Katowice cannot become another Copenhagen.”

The Prime Minister of Tuvalu, Honourable Enele Sopoaga said, “The Paris Agreement offers us a lifeline. But the current commitments in the Paris Agreement constitutes only a third of what is needed to avoid catastrophic consequences of climate change. This is a direct threat to our existence and survival. As already established based on the IPCC s assessments, unless the global community steps up our actions to significantly lower GHG emissions, SIDS like Tuvalu will disappear completely within the next 30-50 years – disappear completely. I repeat again what I said in COP21, Paris, just imagine if you were in my shoes, how would you feel? And what would you do?”

Prime Minister Sopoaga joined other Pacific Forum Leaders, including President Tommy Remengesau Junior of Palau and President Baron Waqa of Nauru in calling for a UN Special Representative on climate and security. In his statement President Waqa said, “Building a more inclusive UN also requires addressing the most urgent global challenges, which include the security implications of climate change. In this regard, I would like to reiterate the call I made in July at the UN Security Council for the appointment of a Special Representative of the Secretary-General on Climate and Security. We are already seeing the impacts on our countries and communities, with the most vulnerable among us bearing the greatest burden. A special representative, supported by a well-resourced staff, is needed to help us start managing climate risks more effectively.”

On the issues of climate change and security President Hilda Heine of the Marshall Islands said, “The Pacific Islands Forum Leaders in last month’s Boe Declaration have declared climate change as the single greatest security threat to our region. This political effort must extend urgent and prioritised assistance to atoll nations like the Marshall Islands – whose very survival is at risk – to help to adapt to climate driven threats we already face, and to avoid a future tipping point only a decade or two away. Much more political effort is needed on the scale and targeting of climate finance. So good intentions from partners can make visible impact in local communities.”

Australia’s Foreign Minister Honourable Marise Payne also spoke about the Boe Declaration, saying, “Australia recognises that Pacific island countries are particularly vulnerable to the effects of climate change and disaster, and this is a leading priority for the region. The Pacific Islands Forum Boe Declaration, released last month at the meeting by member states, takes a contemporary view of security inclusive of human and environmental security and emphasises the importance of regional cooperation and collaboration in building resilience to disasters and climate change.”

H.E Peter Christian, President of the Federated States of Micronesia reminded the General Assembly of the importance of the Montreal Protocol for cutting climate emissions, by saying, “In 2009 Micronesia proposed a fast action strategy using the Montreal Protocol to explicitly cut climate emissions to avoid warming of 0.5 degrees Celsius by the end of the century. While it may sound like a small amount, it is 50% more than the warming we are experiencing today, which is already producing super storms like Typhoon Mangkhut in the Philippines and Hurricane Florence in the US. In order to achieve this goal, we urge all countries who have not yet done so to ratify the Kigali Amendment to the Montreal Protocol – and to accelerate the implementation of this planet-saving strategy.” 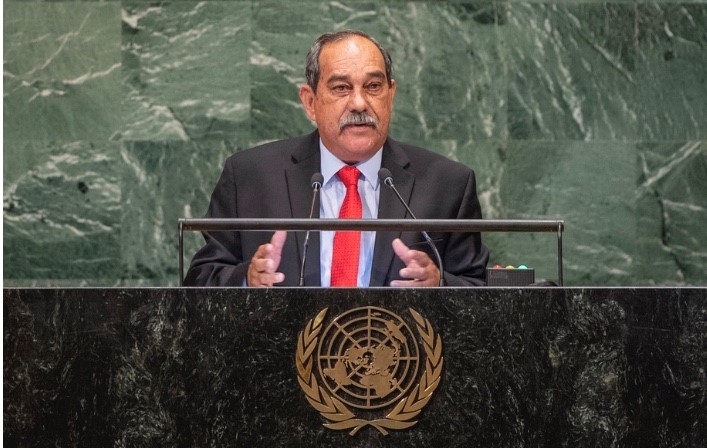 President Christian of the Federated States of Micronesia

King Tupou VI of Tonga highlighted the link between climate change and the health of the world’s oceans saying, “We note with concern the devastating impacts of climate change on our marine environment. Baselines that determine our territorial boundaries, once established under the UN Convention of the Law of the Sea, should not be affected and should remain unchanged despite the effects of sea level rise. Our Sovereignty must not be compromised by climate change and we welcome the work of the International Law Commission on this critically important and timely issue for consideration of the Sixth Committee of the General Assembly.”

Solomon Islands Prime Minister Honourable Rick Houenipwela said, “climate change is the greatest threat facing humankind. For us in the Pacific Islands this threat is existential. The resulting climate change related extreme weather events means that Solomon Islands is more susceptible to natural disasters of greater severity. The threat of sea level rise, as well as inundation and salination of arable land, the destruction of biodiversity, including through a warming ocean and acidification, are ingredients for the causation of food security concerns and increase the risk of potential conflicts.”

“In light of this threat, Solomon Islands calls for collective global leadership in climate change action and for strengthened commitment towards positive outcomes in COP24 in Katowice, Poland, this year.”

Speaking at her first UNGA, New Zealand Prime Minister Jacinda Ardern said, “For those who live in the Pacific, the impacts of climate change are not academic, or even arguable.  They are watching the sea levels rise, the extreme weather events increase, and the impact on their water supply and food crops. We can talk all we like about the science and what it means, what temperature rises we need to limit in order to survive, but there is a grinding reality in hearing someone from a Pacific island talk about where the sea was when they were a child, and potential loss of their entire village as an adult.”

“Our action in the wake of this global challenge remains optional. But the impact of inaction does not.  Nations like Tuvalu, the Marshall Islands or Kiribati – small countries who’ve contributed the least to global climate change – are and will suffer the full force of a warming planet. If my Pacific neighbours do not have the option of opting out of the effects of climate change, why should we be able to opt out of taking action to stop it?”