“The ocean requires global governance and understanding to ensure its long-term health and wellbeing and prosperity for all.” –  Dame Meg Taylor, Secretary General of the Pacific Islands Forum Secretariat 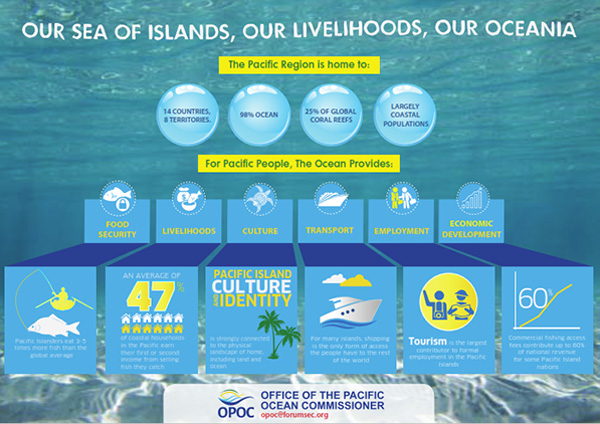 The Pacific Ocean is the largest body of water on the planet and hosts some of its’ richest marine ecosystems. Almost ninety-eight percent of the Pacific region is ocean; and as a result the Ocean and its extensive resources are central to the lives and future prosperity of Pacific Island peoples.

The Ocean and its coastlines provide the region’s inhabitants with a vast array of ecosystem services that underpin our inshore and oceanic fisheries, recreation, tourism, and transport sectors. The Ocean also provides a commonality that weaves our customs and cultural tradition together in a way that is unique to our Blue Pacific continent.  Our ocean also harbours new opportunities in the form of deep-sea minerals and pharmaceuticals, and alternative renewable energy sources which to this day remain largely untapped.

The Pacific Islands Forum has a longstanding commitment to ocean management. In fact, the United Nations Law of the Sea was a point of discussion during the historic first meeting of the Forum in 1971. Through the Forum, the Pacific region has a collaborative and integrated ocean management system in place. The Pacific Islands Regional Ocean Policy promotes “sustainable development, management and conservation of marine and coastal resources in the Pacific region” through five guiding principles based on the United Nations Convention on the Law of the Sea.

The Framework for a Pacific Oceanscape catalyses regional action and initiatives covering an area of approximately 40 million square kilometres of ocean and island ecosystems. It strengthens the Pacific Islands Regional Ocean Policy, particularly through stronger provisions in the areas of coordination, resourcing and implementation. It also aspires to protect, manage and sustain the cultural and natural integrity of the ocean for present and future generations of the broader global community. At its heart is a desire to build pride, leadership, learning and cooperation across the ocean environment.

More recently, Forum Leaders issued the Palau Declaration on “The Ocean: Life and Future” (2014) and the Pohnpei Ocean Statement: A Course to Sustainability (2016). Both statements speak to the interconnections between the ocean and the lives of Pacific people, as well as our ongoing commitment to care for the ocean for our well-being.

The renewed focus on ocean policy, brought about through the pursuit of SDG 14 – Life Below Water, gives us a chance to continue to build on these existing guidelines and policy commitments.

This Policy provides a framework that promotes the sustainable development, management and conservation of marine and coastal resources in the Pacific region. It provides five guiding principles, based on UNCLOS, for individual and collaborative action on improving and understanding, using sustainable development and management practices, working to maintain good ocean health, promoting peace, and creating good relationships with regional states and organisations.

The Pacific Oceanscape is a framework of Pacific regional action and initiatives covering an area of approximately 30 million sq kilometres of ocean and island ecosystems. It builds on and strengthens the Pacific Islands Regional Oceans Policy (PIROP), in particular through more adequate provisions for coordination and resourcing, and implementation. It functions to protect, manage and sustain the cultural and natural integrity of the ocean for present and future generations, and for the broader global community.

Read the Framework for a Pacific Oceanscape

United Nations Convention on the Law of the Sea (UNCLOS)

The United Nations Convention on the Law of the Sea is the main international agreement designed to protect and govern the world’s oceans; it sets out the rights and responsibilities individual nations have for their oceans. The convention establishes the law for the protection of oceans and its resources, and the relationship the ocean has with nations. UNCLOS is the agreement that set the limit of 200 nautical miles from a state’s base line or shore, also known as an Exclusive Economic Zone (EEZ).

The UN Fish Stocks Agreement operates under the United Nations Convention on the Law of the Sea. The Agreement’s main objective is to ensure the use of sustainable fishing. In particular there is focus on helping conserve and manage ‘straddling and highly migratory fish stocks’. The Agreement sets out to encourage member states to protect fish stocks both within and beyond their Exclusive Economic Zones (EEZ). The legal regime under the Agreement is implemented through regional fisheries management organisations (RFMOs), who oversee different regions, oceans or migratory fish stocks around the world.

The Convention is a legally binding treaty that sets out to achieve conservation and sustainable uses for biological diversity. It also attempts to achieve the fair and equitable sharing of benefits arising from the use of genetic resources. The main objective of the Convention is to encourage sustainable environmental activities for the future.

The Ramsar Convention on Wetlands

The Ramsar Convention on Wetlands is an intergovernmental treaty that aims to protect the ecological integrity and sustainable use of wetlands deemed to be of international importance, through local, regional, national and international action. The Convention uses the concept of wetlands as a broad term; the word encompasses examples such as lakes, swamps and marshes, as well as ocean-related varieties like coastal marine areas, mangroves and coral reefs.

Convention for Regulation of Whaling

The Convention for the Regulation of Whaling was established with the purpose of protecting and ensuring the sustainable development of the world’s whale stocks. As part of the Convention there is a Schedule that put in place procedures to govern the conduct of whaling, this includes designating specific areas as whale conservation areas, setting limits on the type and number of whales which can be hunted, prescribing the dates for open and closed seasons, as well as the legal areas for whaling.

The London Convention, also known as the Convention on the Prevention of Marine Pollution by Dumping of Wastes and Other Matter 1972, was the first international law protecting marine environments from human activity. The Convention’s key objectives are to promote clean pollution-free oceans and prevent the deliberate disposal of waste or other matter. The Convention is administered by the International Maritime Organisation.

The Basel Convention on the Control of Trans-boundary Movements of Hazardous Wastes and their Disposal is an international agreement focusing on the protection of environment and the adverse affects of the industrial world. The Convention was established to help reduce hazardous waste with the interest of protecting human health and the environment through ‘environmentally sound management’. The United Nations treaty is signed by 53 countries, and restricts its signatories from importing and exporting of hazardous waste into their state boundary or any other.

The Waigani Convention is also known as the Convention to Ban the Importation into Forum Island Countries of Hazardous and Radioactive Wastes and to Control the Trans-boundary Movement and Management of Hazardous Wastes within the South Pacific Region. The Secretariat for the Pacific Regional Environment Programme (SPREP) serves as the secretariat for the convention and the Secretary General of the Pacific Islands Forum Secretariat is the depository. The Convention operates with the interest to reduce or eliminate trans-boundary hazardous and radioactive waste in the Pacific Island Forum region. It focuses on minimising production of hazardous materials in the region, disposing of them in an environmentally-friendly manner, and supporting producers to dispose and manage waste correctly.

The Arrangement is a cooperation agreement between Polynesian countries, i.e. Cook Islands, New Zealand, Niue, Samoa, Tokelau and Tonga, working together to promote sustainable development in regard to fisheries. In summary, the aim of the cooperation is to achieve common objectives, build and enhance capacity development initiatives, share information, and promote further cooperation between member countries with issues related to the fishery industry.

Adopted at the 38th Pacific Islands Forum meeting in Vava’u, Tonga in 2007, the Declaration was established to create new management solutions and to strengthen solidarity in the region in regards to fish stocks. The Pacific Island Forum Leaders recognised fisheries as a key driver in Pacific Island states’ economies, in particular tuna stocks, and sought to promote the industry further. THE Vava’u declaration committed to sustainable management approaches to ensure future fish stocks, while enhancing the economic opportunities involved.

Following the reaffirmation of the importance of sustainable fishery approaches at the 38th Forum Islands Forum meeting in 2007, The FFA established two strategies in response to the Vava’u Declaration on Fisheries. The strategies’ key objectives are in line with FFA’s mandate of maintaining sustainable fish stocks while receiving the optimum social and economic benefits for its member countries. The RTMDS outlines the major policies on conservation and management of fisheries; it aims to achieve a common understanding between FFA members on how to manage sustainable fish stocks, especially highly migratory tuna stocks, in complex marine environments. The MCSS defines the policies and activities used for regional cooperation to control illegal, unreported and unregulated fishing in the sovereign waters of FFA member states.