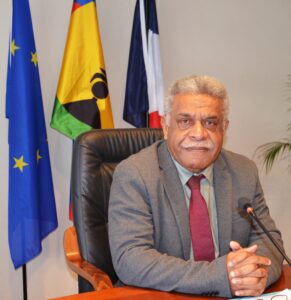 Louis Mapou is an indigenous Kanak from the pro-independence coalition born on 14 November 1958 in Unia, Yaté, south of New Caledonia.

A member of the Kanak Liberation Party (Palika), he is president of the National Union for Independence (UNI) group in the New Caledonian Congress from 2014 to 2021.

Louis Mapou studied human geography at university in Nantes and then in Paris in the 1980s. After a stint at ORSTOM (now IRD), he joined the Rural Development and Land Management Agency and became its Director General from 1998 to 2005.

Between 2005 and 2014, he was director of Eramet, chairman of the board of directors of Koniambo Nickel and director of Sofinor, the economic branch of the Northern Province.

Elected President of the Government of New Caledonia on 8 July 2021, he becomes the first pro-independence leader to hold this position under the status of the Nouméa Accord.