Climate change adaptation and mitigation, including REDD+ (Reducing emissions from deforestation and forest degradation); building resilience against climate change and disasters, Regional integration and stability, sustainable management and use of terrestrial and marine resources, fighting of organized crime and drug smuggling.

Trade in the region

Access to German markets is through the interim Economic Partnership Agreement (Fiji & PNG) and the EU Generalised System of Preference (including the Everything-But-Arms agreement, the GSP and the GSP plus agreements) 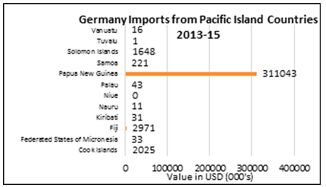 Germany is the 3rd largest contributor to the UN’s annual budget (7.141%), as well as hosts the UNFCCC Secretariat in Bonn. Germany served on the UN Human Rights Council for the 2015-2016 term. Germany has enjoyed uninterrupted membership on the United Nations Economic and Social Council (ECOSOC) since 1974. Germany is seeking to become a non-permanent member of the United Nations Security Council for 2019/20. Germany has a history of activism in calling for a reform of the UN Security Council to better reflect contemporary distributions of power. As of 2016, it has been elected as a non- permanent member of the UNSC on six occasions: 3 times as West Germany, and 3 times post-unification.

Germany is an active donor in the region both through Pacific regional organisations via the European Development Fund (EDF), as well as through its aid agencies, GIZ and the KfW Development Bank. Germany is the 3rd largest contributor to global Overseas Development Assistance (ODA) by volume. In 2015, Germany provided a record high USD 17.8 billion in net ODA. This represented 0.52 % of gross national income (GNI) and a 25.9 % increase in real terms from 2014. Like other EU member countries, it is committed to meeting the 0.7 % ODA/GNI target by 2030. Germany’s Net ODA disbursement to ‘Oceania’ in 2014 was USD11.8 million, which increased from USD 2.5 million in 2008, with a peak of USD 13.1 million to ‘Oceania’ in 2013, placing Germany as the 5th largest contributor of direct ODA to Forum Island Countries compared to other PFD partners.

Germany’s bilateral support is closely aligned to EU policy in the Pacific. Relations with the Pacific are historically defined by the Lome Convention and most recently the Cotonou Agreement (2000). The 2006 report, ‘A Strategy for Strengthened Partnership’, articulates an increase in EU-Pacific political and economic relations, with EU reports that cooperation in the Pacific has ‘intensified’, with regard to issues of governance, environment and climate change. As an EU member state, Germany’s successful bid for PFD partnership alongside the EU’s existing PFD relations, presents an opportunity for the Forum to further influence the EU’s foreign policy in the Pacific. Germany is the largest financial contributor to the EU and subsidiary bodies such as the European Development Fund (EDF).