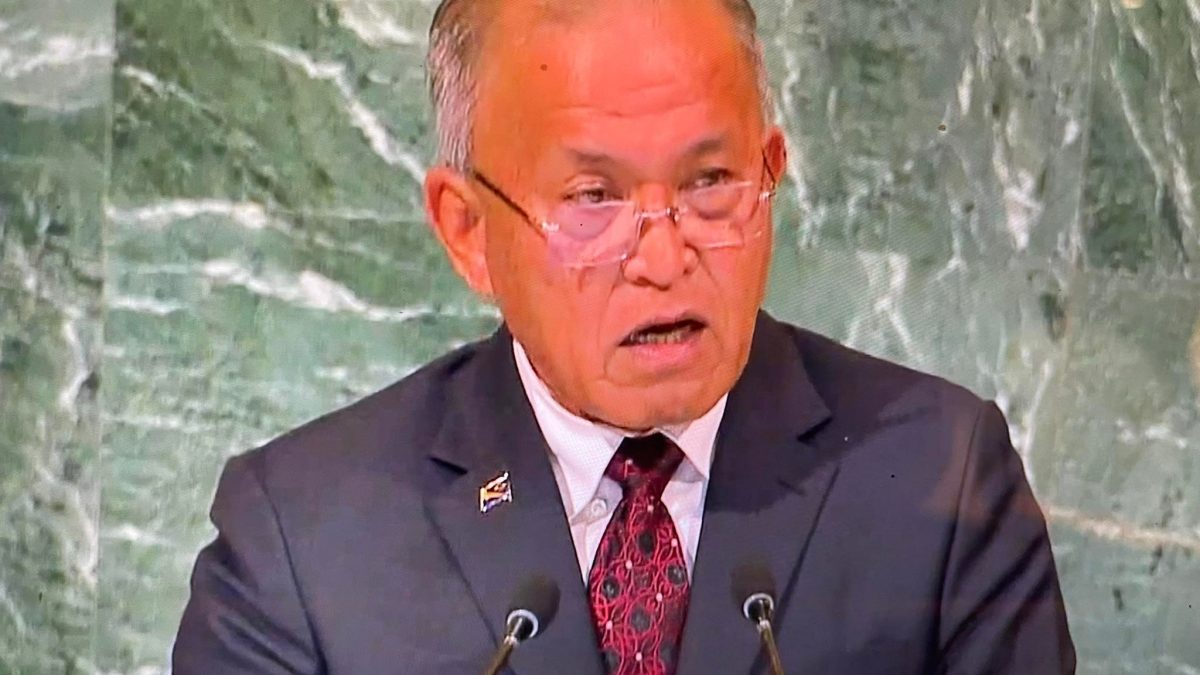 Mr. President, Mr. Secretary-General, Excellencies,
I bring you warm greetings of Yokwe from the People and Government of the Republic
of the Marshall Islands. I also bring these greetings at an uncertain global hour. Geostrategic tension has risen in both Eastern Europe and the Indo-Pacific. The Blue Pacific continent and, in particular the Micronesian region, are no exception – indeed we are a unique front line.
As one of the last nations in the world to reopen its borders, following our recent community COVID outbreak, we join the international community in both mourning our loss, while also thankful for partnership.
We value the United Nations as our primary international stage. But if the world does not adequately respond to the island nations, and as seas rise, then there is really no United Nations at all.
For the Marshall Islands, our first and most threatened priority is to never cease to safeguard our nation’s land, ocean and maritime boundaries, as seas are rising, and to ensure our communities have a safe, secure and fully democratic sovereign future. Our vulnerabilities, and those shared in our region, are severe and diverse.
We join many others, and especially our Pacific Island neighbors, in condemning Russia’s continued aggression and war crimes in Ukraine. We do so not only as a United Nations member, but also in response to a wider global instability – which directly impacts our own islands region.
Russia and all related actors will be held to account, as actions have consequences.
The Republic of the Marshall Islands stands proudly as a co-chair of the Group of Friends of Accountability following the aggression against Ukraine, and supports the independent investigations of the UN Human Rights Council and International Criminal Court.

The war in Ukraine has influenced sharp economic shocks around the world, and as a remote, small island developing state, our energy security is at a saturation point. Even as we seek to boost efficiency and renewables, greater cooperation is needed to move towards regional approaches to energy security and affordability, including addressing potential joint bulk purchasing.
The Republic of the Marshall Islands condemns the recent military actions of the Peoples Republic of China in the Taiwan strait. This has threatened to disrupt peace and security in the Indo-Pacific region and across the globe.
We welcome recent IAEA monitoring reports on the Fukushima Daiichi Nuclear Power Station and look forward to continued engagement through appropriate fora.
Mr. President, while we have shared goals and a strong partnership with the United States of America, we also have grave development challenges and essential needs to better assure present and future Marshallese generations of their growth and well-being. We welcome recent progress with the United States of America towards a renewed Compact of Free Association and with it a targeted trust fund. It is vital that the legacy
and contemporary challenges of nuclear impact testing be better addressed, that climate change be addressed with the urgency and commitment it deserves, and that our voice as an equal partner is strengthened. We know that the United States stands tall for its renewed engagement with the Pacific Islands, and it is essential for all of us to ensure that words are met with actions.

Mr. President, As the Marshall Islands, we stand gravely concerned at an increasingly polarized world where nuclear weapons testing and detonation are only growing in risk. We condemn the threats of further nuclear testing, and the threat of nuclear warfare. And we have humanitarian concerns of our own, shared by a great many other nations, over any nuclear detonation or the risk thereof. And here the Marshallese people also have a unique voice.
My country, the Marshall Islands, was ground zero for the testing of the 67 nuclear and thermonuclear weapons for twelve years during the UN-US administered trusteeship era. The exposure of our people and land has created impacts that have lasted – and will last – for generations. These impacts to our human rights, land, culture, health and lives, are burdens that no other nation or country should ever have to bear.
Our own experience, history, and current challenges to nuclear exposure are key drivers for urging progress in reducing – and ultimately eliminating – nuclear risk. We welcome effective and meaningful progress on this from major powers and nuclear weapons states, and from all states – in whatever form it can effectively be achieved.

Mr. President, as a member of the Pacific Islands family, we rally and acknowledge that the greatest challenge and threat is Climate Change. As a low-lying atoll nation, whose future is at risk, there could be no stronger statement. Nor should climate change be considered in isolation – tackling complex adaptation measures within a wider fragility makes our task just that much more difficult.
Today, as I enter this iconic hall, the symbol of humanity’s hope and aspiration for world peace, prosperity, and international cooperation, my thoughts flashed back 31 years, when the first president of the Marshall Islands addressed this eminent Assembly and called attention to the dangers faced by our small nation due to the looming threat posed by global warming. Over thirty years ago, in this great hall and at the Rio Summit, our leaders sounded the alarm and warned of its dire consequences.
As a matter of record, Marshallese presidents and leaders in every succeeding administration have been active and at the forefront of all UN global conferences on climate change and global warming – speaking out and fighting to keep our low-lying nation afloat. Today, we renew our call to the world to declare total war on this
century’s greatest challenge – the climate change monster. And yet, after all these years, the world has failed to break our addiction to fossil fuels.
We are not investing enough in life-saving adaptation, particularly for small island states. We see the toll of this global crisis; how much worse will this be if we breach 1.5 degrees Celsius?

The IPCC has been clear: solutions exist that can give us a fighting chance. COP26 delivered vital progress. As the convener of the High Ambition Coalition, we believe without question that the Glasgow Climate Pact must be the foundation for a safer future.
We must honor these commitments and deliver enhanced Nationally Determined Contributions, and policies on coal and fossil fuel subsidies to reach those targets.
We must build that future by catalyzing transformations today. By drastically increasing renewable energy. By taking on tough sectors like aviation and shipping. The Marshall Islands has proposed a carbon levy for international shipping that will drive the transition to zero emission shipping, channeling resources from polluters to the most vulnerable. I humbly urge all countries to embrace this at the International Maritime
Organization.
Mr. President, I see hope in elaborating a global goal on adaptation that will set our collective sights
on a safe, resilient future. Delivering adaptation at the scale required, calls for bold and substantial investment. The doubling of adaptation funding is a vital start. But like all climate finance, we must see it delivered to the most vulnerable. Loss and damage to property, and human suffering, are already occurring, with profound human rights impacts. This must be addressed, including through a finance facility that will help those on the frontlines. This is a question of giving hope to those of us that face immeasurable threats – to our people, nation, and culture.
Mr. President, we are pleased to note and support the establishment of the human right to a clean environment, and of a special rapporteur for climate change and human rights. As a small island developing state, we are committed to better understanding and addressing complex challenges in human rights around the world, but development is never a trade-off for affirming universal human rights. Our own national experience tells us that politics must never step over the voices of the most vulnerable.

We welcome the recent release by the UN High Commissioner for Human Rights of a long-delayed report on the human rights situation in the Xianjing region of the People’s Republic of China. We are gravely concerned regarding the report’s findings that “serious human rights violations have been committed” and that widespread arbitrary detention “may constitute international crimes, in particular crimes against humanity.”
The international community cannot bear silent witness and must react.

The Republic of the Marshall Islands also affirms the role of the Pacific Islands Forum in addressing human rights issues in West Papua, including the prior call for engagement with the UN Human Rights High Commissioner.

Mr. President, As an ocean and island nation, we congratulate our close neighbor Palau for having
successfully hosted the Our Oceans conference earlier this year. We support the recent UN 2022 Oceans Conference in Lisbon and congratulate Portugal and Kenya for cochairing this meeting. The world must address a growing gap in effective oceans management in the high seas and its neighboring coastal states. While we welcome important progress, far greater effort will be needed to conclude an ambitious
instrument on Biodiversity Beyond National Jurisdiction, under the UN Law of the Sea.
While our Pacific islands tuna stocks stand strong, the fishing effort by global actors grows. We are proud of our sustainability benchmarks and partnerships, and small island developing states must continue to boost economic participation to match our leadership efforts.
Mr. President, The United Nations must be truly universal, all embracing and all inclusive. And we must guard against leaving any nation or people outside the gate and in the cold.

Today, we call on the UN to better welcome Taiwan and its people into our global family. How long will the UN persist in closing its doors and thereby denying access to the people of Taiwan? Taiwan is a vibrant democracy and responsible and contributing member of our global family, and the United Nations circle of unity is incomplete without Taiwan and its people.
The United Nations Secretariat too often relies on politically motivated interpretations of Resolution 2758, when responding to opportunities for the meaningful participation of Taiwan in international bodies and the UN system. Now, that the world is facing escalated tension in and around our island’s region, we as the world cannot be silent.

With the ability for meaningful participation in the UN system, and to make greater contributions, Taiwan can better join all of us to make a collective difference. The UN system should revert to its original policy of consideration of widely accepted passports for basic public access to the UN itself, and make good on its goal of broader participation, including registration procedures for civil society access. No one is left behind in the SDGs, least of all one of our important partners in tackling these goals.

Mr. President, The United Nations is in desperate need of a UN Security Council which is truly fit for purpose, and which should be better shaped to the realities of today, not eight decades ago. We strongly support better progress in achieving UN Security Council reform outcomes, and in particular support Japan’s bid to be a permanent member of the UN Security Council.
In closing, it is very clear to us that all the problems that our global communities are facing today from the COVID19 pandemic to the roaring inflations and rising energy costs, cannot be solved by any single nation. Rather, we must come together as a united global family to solve them. But we cannot solve these problems as long as the world is in conflict or in other words, we cannot do it without world peace.

It reminds me of the following poem: