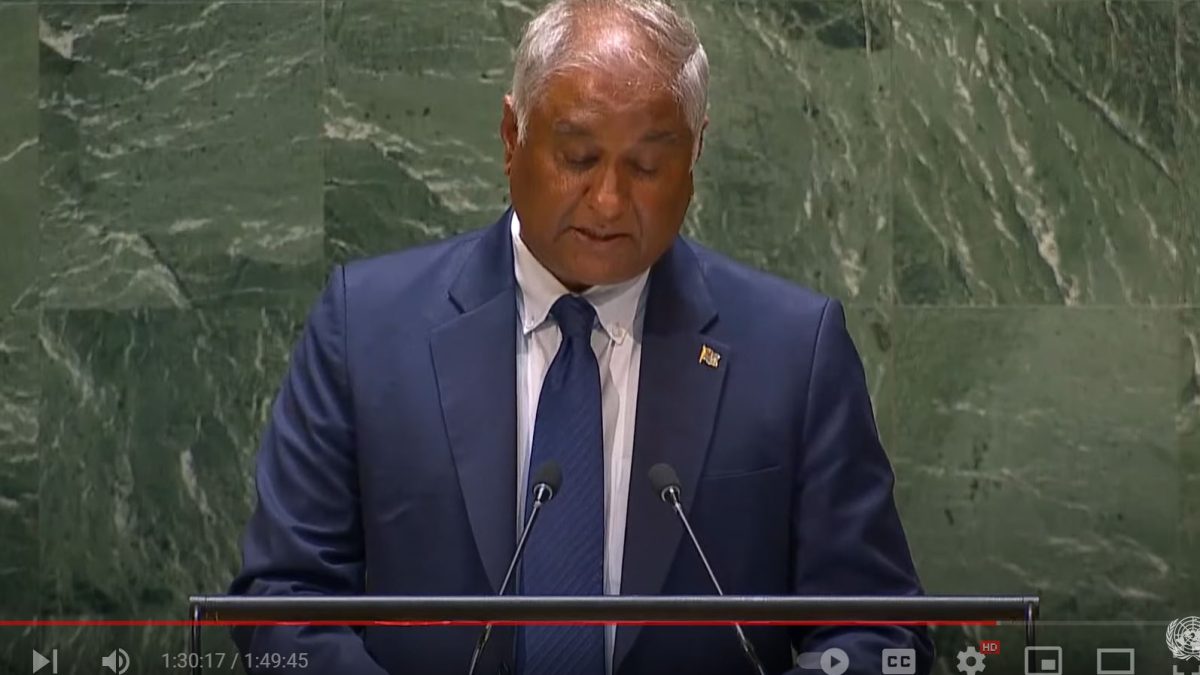 Permanent Representative of Fiji to the UN

1. I have the honour to deliver this statement on behalf of the Member States of the Pacific Islands Forum with presence here at the United Nations, namely, Australia, Federated States of Micronesia, Nauru, New Zealand, Palau, Papua New Guinea, Republic of Marshall Islands, Samoa, Solomon Islands, Tonga, Tuvalu, Vanuatu and my own country, Fiji; and in addition, Kiribati.

2. Our Pacific family joins the chorus of voices from around the globe in paying tribute to Her Majesty Queen Elizabeth II. We join the international community in honouring a life of service and dedication to her people, to the Commonwealth and to the broader global community during her seven decades as Monarch during a period of profound upheaval and change.

3. Her Majesty was the Head of State for five of our member states. The majority of PIF states are members of the Commonwealth which she served as its head.

4. Her Majesty was much more than a Head of State or the Commonwealth for people across our Blue Pacific Continent. Her frequent visits to the Pacific demonstrated a keen and lifelong interest in the development of our region, a personal affection for our diverse cultures and deepest of respect for its traditions.

5. For many of us, it is this personal connection which will be remembered most fondly. I myself was inspired when, as young boy in my town of Labasa, Fiji, I joined my fellow schoolmates in welcoming her to our small town in the island of Vanua Levu in Fiji. Her visits had a way of energising community action and catalyzing development interventions whose impacts lasted long after her departure – a hallmark mark of great leadership.

6. This was equally true of her visits to New Zealand, Australia, PNG, Solomon Islands, Tonga, Vanuatu, Tuvalu, Samoa and elsewhere across the region.

7. During her many visits to PIF countries, we have listened to Her Majesty reflect on UK and Pacific relations. Her insights were always heartfelt. They reflected a deep understanding of the Pacific and her peoples; and demonstrated a profound sense of empathy for our region’s concerns.

8. This interest in the Pacific was reciprocated in abundance. Many of our leaders have spoken of their close bonds with Queen Elizabeth. The Chair of PIF and Fiji’s Prime Minister Hon. Josaia V. Bainimarama has stated that Her Majesty’s “grace, courage and wisdom were a comfort to our people, even a world away”. Accordingly, a number of Pacific leaders are currently travelling to pay their respects in person.

9. In Nauru, September 12 has been declared ‘Remembrance Day’ in honour of her Majesty. In Papua New Guinea, official government business has been halted to observe the mourning period. In the Cook Islands, flags are flying at half-mast. A Fijian soldier serving in the British Army, was one of the few to be chosen as a pallbearer for the late monarch on her last journey from Balmoral to Holyroodhouse Palace in Edinburgh.

10. As we pay tribute to the life and work of Queen Elizabeth II, we offer our condolences to the Royal Family and wish His Majesty King Charles III a long, peaceful and rewarding reign as he embarks on a chapter filled with promise and hope.

11. His Majesty King Charles III is an alumnus of Martyrs Boys High School in Oro Province, Papua New Guinea, a speaker of ‘Tok Pisin’- one of our Pacific languages- and keen supporter of many environmental and climate adaptation programs across the region. We are secure in the knowledge that the closeness between the British Crown and Blue Pacific will endure during his reign and beyond.

12. It is this timeless spirit of continuity and stability which underpinned Queen Elizabeth’s reign that serves as a foundation for enduring relations between the peoples of our region, the Pacific Islands Forum and the United Kingdom.

13. It is fitting then that I quote our Secretary-General, H. E. Mr. Henry Puna to close my remarks in tribute to Her Majesty Queen Elizabeth 11:

“Her lifelong commitment to the service of all her peoples across the globe was exemplary. As the world’s longest serving monarch, her consummate dignity and character, her resolute grace and calm through the 70 years at the helm of global history, have set a standard of leadership and stability many can only aspire to.”

14. To Her Majesty, for a lifetime of service to Pacific, the UK and the Commonwealth; a vinaka vakalevu from people and Government’s across the Blue Pacific.–ENDS/CHECK AGAINST DELIVERY