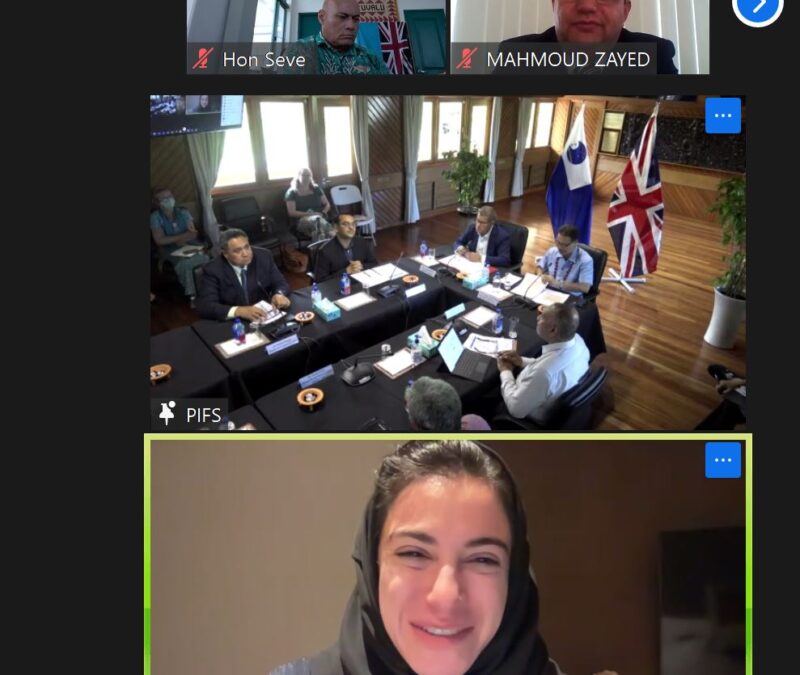 Wed 27th July 2022, PIFS SUVA— Pacific Island nations have received resounding support from the hosts of the world’s climate negotiations in the lead up to COP 27 this November. With just over a hundred days to go before the opening of the COP 27 in Sharm El Sheikh, the COP 26 President, Rt Hon Alok Sharma, delivered a public lecture and joined fellow COP global ‘troika host nations Egypt and the UAE’ for a climate roundtable with Pacific’s Political Climate Champions at the Pacific Islands Forum Secretariat, in partnership with the One CROP Team (SPREP, SPC, USP and FFA) and the British High Commission in Fiji.

“I’m pleased to say the visit of the COP 26 president, as well as the opportunity for the incoming COP 27 and COP 28 host to meet with the Pacific, really has struck a positive note today– it could not have come at a more important time,” said Acting Forum Secretary General Dr Filimon Manoni.

Following opening remarks to the Roundtable from the COP 26 President Hon Alok Sharma, His Excellency Ambassador Mahmoud Zayed, Egyptian Ambassador to Australia, followed on behalf of the COP 27 President Designate and welcomed opportunities to partner more strongly with the Pacific nations as part of COP 27.

Ms Hana Al Hashimi – Lead Negotiator – COP 28 Presidency – United Arab Emirates shared on COP 28 priorities, noting that the UAE would be working with the Pacific to address the concerns raised and reaffirmed the sentiments on implementation and action.

The Roundtable also provided an opportunity for the COP 26 President to reiterate earlier messaging from his public keynote at the Forum Conference venue. Minister Sharma had been frank and clear in responding to the call from Forum Leaders’ declaring a climate emergency for the Pacific region, during their mid-July meeting in Suva.

“1.5 degrees is not about thriving, it is ultimately about survival. And it makes it even tougher when the richest countries, the biggest economies, those belching out the bulk of the emissions are still not doing enough,” he said.

His live-streamed keynote was met with a quick round of questions echoing Pacific concerns around strategic impact and engagement, including a vote of thanks from youth activist and USP student Salote Nasalo.

At the roundtable, chaired by Samoa as PSIDS Chair, High Commissioner to Fiji, H.E Feturi Elisaia noted Forum Leaders have recently declared the Pacific is facing a climate emergency.

“Our Forum Leaders have also urged world leaders, especially the big emitters, to recognise climate change as the single greatest threat to the planet, to commit to achieve net zero emissions by 2050, and to revisit and submit enhanced NDCs before COP 27. A great success of COP 26 was that it delivered us the Paris Agreement Rulebook. We now have no excuse not to start implementing– COP 27 in Sharm El Sheikh must be an implementation COP”, he said. COP 26, 27 and 28 representatives were informed of how Pacific Leaders appointed Political Climate Champions in 2021, to strengthen the capacity of Pacific Island Country Parties to strategically engage and influence strong outcomes on Pacific priorities through the UNFCCC. The 51st Pacific Islands Forum welcomed the work of the champions and supported their ongoing strategic engagement for COP 27 and beyond.

The roundtable heard from individual Political Climate Champions speaking to their priority issues.

In his remarks the Honourable Seve Paeniu, Minister of Finance for Tuvalu and Champion for Loss and Damage noted a workable strategy for new and additional climate financing is required to address a Loss and Damage financing facility and a “Santiago Network advisory structure that works for all.”

He added the need for PSIDS to be fully engaged in AOSIS and other intersessional work on Loss and Damage, calling for strategic and sustained momentum between COP meetings. Minister Paeniu commended the advocacy and engagement of UK in its role as the COP26 President and asked that Egypt note the example of the UK Presidency in reaching out to the global sub-regions to develop conversations on the COP agenda.

The Honourable Steven Victor, Minister of Agriculture, Fisheries and Environment, Republic of Palau and Champion for Environmental Integrity welcomed the acknowledgement “that COP27 must be the implementing COP”. Minister Victor said continued assurance for environmental integrity needs to be reflected in the outcomes of COP27. He listed specific measures on Clean Mechanism Development (CDM) credits to avoid double counting, including an international registry to ensure accountability. He also welcomed efforts on nature-based solutions, saying Ocean states see the value in this work.

In comments on behalf of the Climate Finance Champion, Cook Islands PM Mark Brown, Mr Wayne King, Director of Climate Change called for conclusion of the operational definition for climate finance and the need for the Technical Experts Dialogue on the New Collective Quantified Goal be focussed on scope, as well as the need to further simplify access to finance to address adaptation, mitigation and loss and damage. Mr King added the PM reaffirms his role as the Climate Finance Champion. We need to be cohesive, have strategic thinking, and political willpower, he said.

Mr Kushaal Raj, Acting Director of Climate Change on behalf of Fiji’s Minister of Economy and Climate Change, the Champion for Oceans, noted that Fiji would be continuing its support to championing Oceans. He referenced key actions and priorities to ensure stronger reference to Oceans in the COP 27 outcomes, and repeated key messages from Fiji on Oceans, including a call for a three-year work program on Oceans-Climate nexus, a high-level event on Oceans at COP 27 to tackle specific challenges facing the ocean including maritime pollution.

Following the comments from the Pacific Political Climate Champions, Director General of SPREP, Mr Sefanaia Nawadra, provided reflections as the One CROP Chair. He joined the round of thanks from the Pacific for the efforts of the COP 26 President and the UK Government, adding he was encouraged by the Egypt position on a push for emissions reductions as well as a focus on Nationally Determined Contributions, NCDs.

In his closing remarks, the COP26 President said the key reason Glasgow enjoyed the success it had was because the world worked together. He said the onus is on developed countries to ensure that developing countries access the finance required and urged Pacific nations to remain solid in their moral position and push for biggest emitters to address the climate crisis. —ENDS.