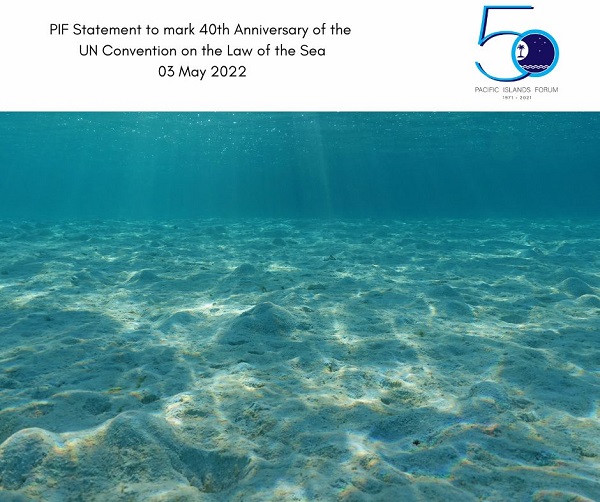 [03 May, 2022, Suva, Fiji] With law of the sea critical to the prosperity and security of the Blue Pacific, the Pacific Islands Forum has delivered a statement to a high-level United Nations General Assembly event to commemorate the 40th anniversary of the adoption of the UNCLOS.

Delivering a statement on behalf of the Chair of the Pacific Islands Forum, Tuvalu’s Permanent Representative to the UN, Ambassador Samuelu Laloniu, spoke to the critical role UNCLOS plays as the Constitution for the oceans and recalled the historic negotiations and adoption of UNCLOS – one of the most comprehensive and successful environmental diplomatic efforts of the 20th century.

“As guardians of the largest part of the Ocean, we are proud and strong defenders of UNCLOS as the legal order for the world’s oceans and seas.  UNCLOS is the backbone that upholds legal certainty, stability, security, and predictability for our island nations.”

Owing to UNCLOS, the Blue Pacific enjoys its status as large ocean states covering territories with a combined Exclusive Economic Zone (EEZ) of close to 40 million square kilometres, which is more than the combined size of Russia, China, the US, and the EU.

“UNCLOS has continued to shape our vision and goals for the region, including through the 1985 South Pacific Nuclear Free Zone Treaty, the 2010 Framework for a Pacific Oceanscape, the Blue Pacific narrative, and the 2050 Strategy for the Blue Pacific Continent which Pacific Leaders will consider this year.”

With climate change the single greatest threat to the Blue Pacific region, the statement highlights the 2021 Forum Leaders’ Declaration on Preserving Maritime Zones in the face of Climate Change-related Sea-level Rise, which upholds the supremacy of UNCLOS and calls on States Parties to join the Pacific Islands Forum in adopting similar regional and national practices.

The Pacific Islands Forum calls on States who have not done so to ratify UNCLOS, which continues to inspire and pave the way for collective leadership and solutions on present and future challenges and opportunities for our home, our one Blue Planet.