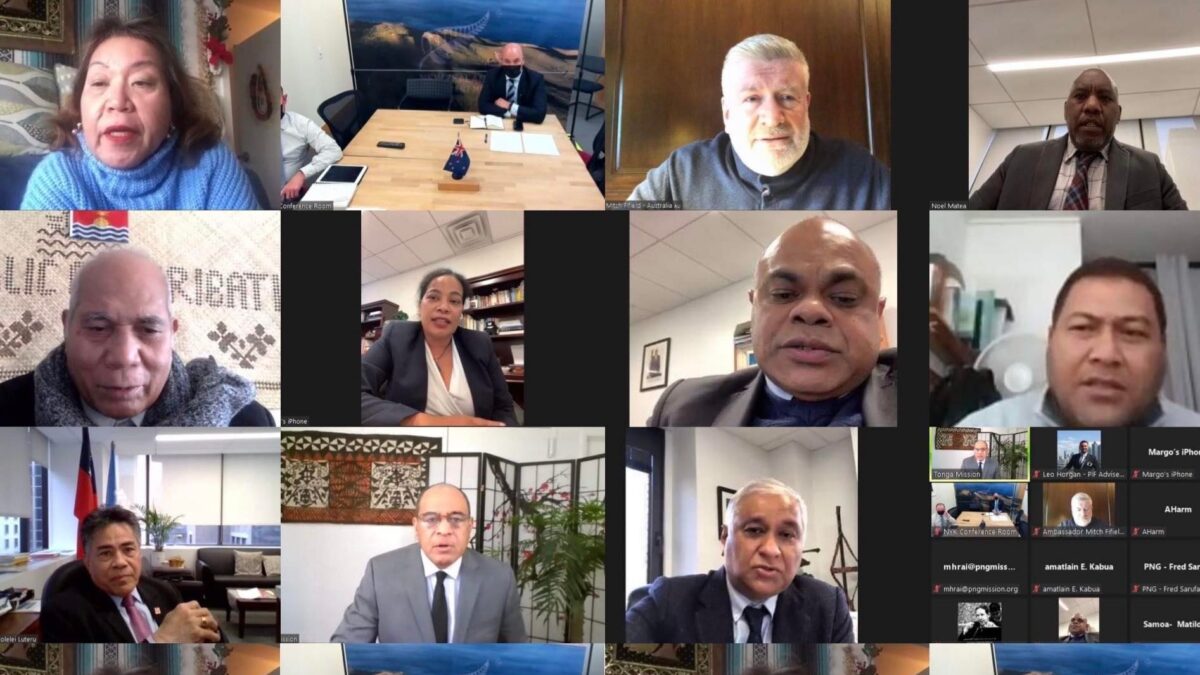 Fiji PRUN, New York–Pacific Island Forum (PIF) ambassadors to the United Nations gathered virtually on the 21st of January 2022 to pledge their governments’ solidarity and coordinate international action in response to the volcanic eruption of Hunga-Tonga-Hunga-Ha’apai and subsequent tsunami which devastated the Kingdom of Tonga on 14 January 2022.

PIF Chair and Permanent Representative of Fiji to the United Nations H.E. Satyendra Prasad convened the group, reiterating the support expressed by Pacific Islands Forum Secretary-General Hon. Henry Puna and calling for coordinated, strategic action under the direction of the Tongan government.

“Given the scale and breath of devastation affecting over 80 percent of the Tongan population and in the context of the COVID pandemic and two recent catastrophic cyclones, it is crucial that international assistance via the UN and bilateral partners is well-coordinated, timely and well-targeted,” said Ambassador Prasad, “PIF ambassadors have an important role to play in support the Government of Tonga’s efforts in this regard”.

Permanent Representative of the Kingdom of Tonga to the United Nations, H.E. Viliami Va’inga Tone briefed the group, confirming three fatalities and detailing injuries, damage to infrastructure and disruption to services in Tonga. He outlined his government’s response to the disaster, relaying immediate priorities for the government including clean water, communications and sea and air transport.

Ambassador Tone welcomed the coordination support for the government of Tonga that was being provided through the United Nations and its Resident Coordinator in the region. He reflected that, as Pacific ‘Ring of Fire’ countries, many Forum member states could have fallen victim to such a disaster, noting that Papua New Guinea and Vanuatu had also suffered recent volcanic eruptions.

Ambassador Tone conveyed his government’s gratitude for the outpouring of support from regional and global partners including UN member states, the World Bank and Asian Development Bank.

Forum members in turn expressed their respective governments’ support, agreeing that maintaining Tonga’s Covid-free status, assessing short and long-term needs strategically and avoiding duplication in national support strategies through the guidance of the Tongan government were of paramount concern.

Australian and New Zealand Ambassadors present provided a summary of the assistance already being deployed and assured the Government of Tonga and they were on standby for further assistance as needs become clearer.

The solidarity of Pacific communities was also acknowledged by the group, with Tongan diaspora and citizens of Forum countries seeking to assist their Tongan neighbours in their time of need. Cash donations to reputable organisations were encouraged rather than sending physical items which could hinder relief efforts.

The PIF Ambassadors and Chair in New York agreed to continue making all efforts to ensure that international support is provided in a timely, well-coordinated manner under the direction of the Tongan government. –-ENDS