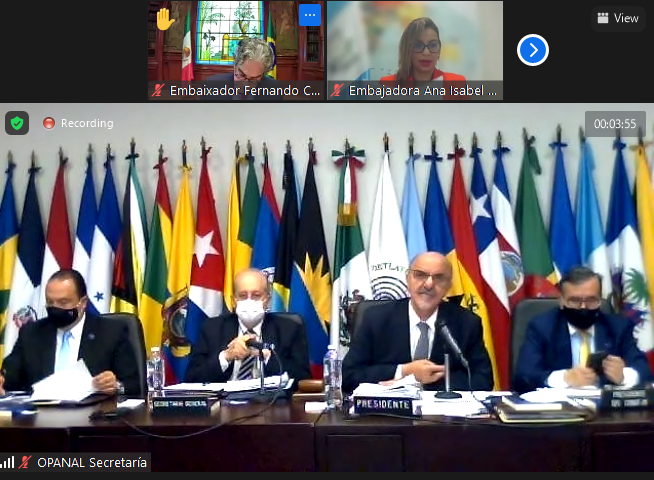 The XXVII (27th) Session of the General Conference of the OPANAL

The Chair of the General Conference, Excellency Dr Eduardo Jaramillo,

Distinguished Member States of the Treaty for the Prohibition of nuclear weapons in Latin America and the Caribbean,

Kia Orana, Bula Vinaka, and warm greetings from the Blue Pacific. It is a great honour to join this important gathering on behalf of the South Pacific Nuclear Free Zone Treaty.

At the outset, I wish to congratulate OPANAL and Member States for the 54th anniversary of the Treaty of Tlatelolco. As the first major example of a regional approach to non-proliferation, the 1967 Tlatelolco Treaty is a beacon for all nuclear free zones and peace-loving nations.

In addressing you today, I will recall briefly our long-standing history of cooperation, and speak about opportunities for advancing our shared goals.

Excellencies, nuclear disarmament and non-proliferation have been a major focus of the Pacific Islands Forum since its creation 50 years ago in 1971.

However, despite 36 years of the Treaty of Rarotonga, and 25 years since the permanent cessation of nuclear testing in our region, the nuclear threat remains, exacerbated by the permanent, inter-generational consequences and impacts of nuclear weapons.

As highlighted earlier this week by the Prime Minister of the Republic of Fiji, and Chair of the Pacific Islands Forum, the Honourable Josaia Bainimarama, our “commitment to the elimination of nuclear weapons is not based on an abstraction. It is based on real experience with the consequences of nuclear fallout, and it is at the root of our sense of urgency”.

As we face ongoing nuclear threats today, the institution of nuclear free zones remain a critical pillar for our global efforts.

The Pacific Islands Forum has enjoyed a long history of cooperation with the OPANAL. In 1988, Pacific Leaders “declared their support for the common aims and aspirations held by the peoples of the Pacific and Latin America for a nuclear-weapons-free environment as advanced by the Treaties of Rarotonga and Tlatelolco”.

Leaders also directed Forum cooperation with the OPANAL for the achievement of those aims. This led to an Agreement between our organisations in 2003.

Between our two neighbouring zones, I believe there are a number of areas we can continue to learn and share about, as we strengthen our inter-zonal cooperation.

Our Pacific nuclear free Zone safeguards our large ocean states, territories, and our rich natural endowment we call the oceans against the many threats posed by nuclear contamination. Most importantly, the Treaty has continued to deliver on the common objective that we as nuclear free zones continue to aspire for, that is, total disarmament and a world that is free of nuclear weapons.

Whilst the Treaty area encompasses vast areas of ocean space, the Treaty, by the same token, recognises the exercise of rights and freedoms of States under international law with regard to the uses of ocean space. Furthermore, the Treaty and in effect international law respects the sovereignty of States parties with regards to the question of the right of foreign States to innocent passage and request for port calls.

The intentional omission of “weapon” from the title of our Treaty reflects the desire of States Parties to engage on the issue of nuclear non-proliferation in a holistic fashion. We are intent on delivering on the objectives of the Treaty on our own terms, and to contribute to the global effort to encourage compliance with international nuclear non-proliferation commitments and best practices, rather than being drawn into the nuclear madness of some.

Additionally, the Rarotonga Treaty innovatively bans the dumping of radioactive nuclear waste in our zone, as well as bans the provision of assistance or encouragement to “anyone” to dump waste in our region.

To date, we are accelerating engagement with Japan and the IAEA to ensure the prevention of any harm to our Blue Pacific from Japan’s plans to discharge over a million tonnes of nuclear wastewater from its Fukushima Daiichi Nuclear Power Plant into the Pacific Ocean.

Looking ahead, I reiterate the ongoing solidarity of the Pacific Islands Forum with OPANAL as we recommit to enhance all means of cooperation between our Zones to address current threats and challenges.

We also look forward to continued cooperation with all nuclear-weapon-free zones in the lead up to the Review Conference of the Parties to the NPT in 2022, as well as to the Meeting of States Parties to Treaties Establishing Nuclear Weapon- Free Zones.

To this end, I also wish to offer our interest to host a meeting of Nuclear-Weapon-Free Zones in the Blue Pacific in 2022.

I wish you the best in your deliberations, and for successful outcomes of this General Conference.

I thank you. —ENDS