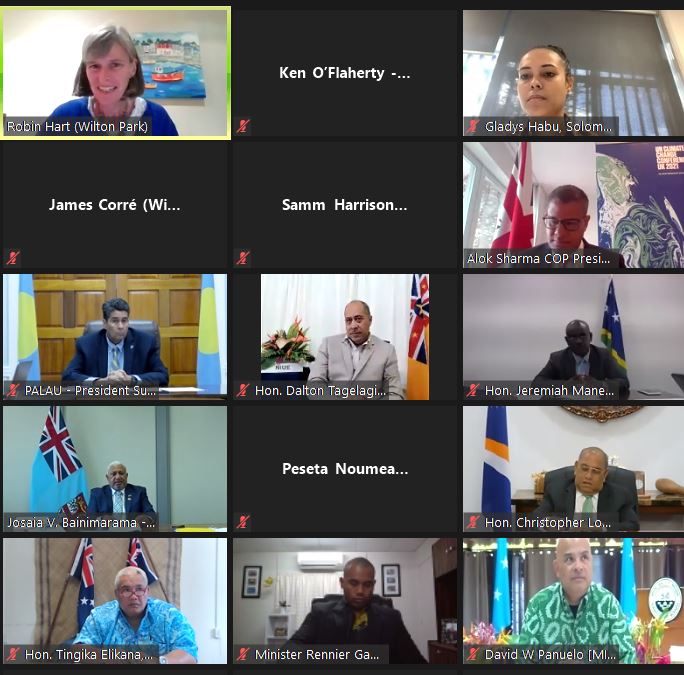 Underscoring what is at stake for the Pacific, leaders and Ministers from 11 countries across the region joined a virtual dialogue hosted by the UK to outline their commitment to ramping up climate action and urge for more decisive action from the largest greenhouse gas emitters.

The UK is hosting the next United Nations climate change conference, known as COP26, in Glasgow in November. This major event will bring world leaders together to discuss and agree urgent action to tackle the climate crisis.

With Pacific countries at the frontline of the impacts of climate change – from more extreme weather to rising sea levels and coastal erosion – the region has a unique moral authority on climate change and can play a crucial role in framing the agenda during COP26 to drive more ambitious action from the biggest emitting countries.

During today’s UK-Pacific Climate Dialogue, representatives from Fiji, the Federated States of Micronesia, Palau, Tuvalu, Niue, Republic of Marshall Islands, Cook Islands, Solomon Islands, Vanuatu, Nauru and Samoa outlined the disproportionate and devastating impacts climate change – a phenomenon not of their creation – has on livelihoods across the Pacific region.

They urged further ambitious action from developed countries around the world to curb emissions and limit global warming to 1.5°C, and called for COP26 to deliver a step-up in finance for Small Island Developing States both in mitigation and adaptation action. They also underlined the importance of ocean issues in climate negotiations.

The event was hosted by COP26 President, Alok Sharma, who reaffirmed his commitment to an inclusive COP26 that delivers for the most climate vulnerable countries, including those across the Pacific.

COP26 President-Designate, Alok Sharma, said:
“The discussions we have had today set important foundations for Glasgow, as we move toward building agreements that work for everyone, particularly those most affected by climate change.

“Pacific islands are at the forefront of a crisis they did next to nothing to cause, with a temperature rise above 1.5°C presenting an existential threat to their future. Many are showing real leadership on tackling climate change. The G20 and other major emitters now have a moral responsibility to follow this example, and that of the G7, by taking urgent action to keep 1.5°C alive.”

Climate activist and youth leader from the Solomon Islands, Gladys Habu, also joined the event to urge countries to step up action.

She said:
“My only request is that each respective Pacific island country must prioritise the climate crisis by declaring it a climate emergency. This declaration will be symbolic of your national commitment to my generation.

“We contribute almost nothing yet we are at risk of losing everything. Please come and stand in our seas and feel for yourself the urgency and importance of your responsibility. The loss of my beloved Kale is my line in the sand and should be a red flag for our global community.”

Today’s UK Pacific Climate Dialogue was hosted by the UK Government in collaboration with Wilton Park and CROP – a COP-focused group of Pacific regional agencies.

With Pacific Island Countries playing an important role in pushing for greater ambition from bigger emitting countries, the high-level dialogue event is a key milestone on the road to COP26, held in Glasgow from 31 October -12 November.

The UK is using its COP Presidency to urge all countries to set targets to get to net zero by the middle of the century, and to come forward with ambitious 2030 emissions reduction targets.

Around 70 percent of the world economy is now covered by net zero targets, up from less than 30 percent when the UK took on the COP26 Presidency.

The UK Government will continue to work closely with Pacific partners over the coming months to understand their priorities and ambitions for COP26.

CROP refers to members of the Council of Regional Organisations of the Pacific, and climate change matters are coordinated by the Secretariat of the Pacific Regional Environment Programme (SPREP – www.sprep.org).

They are also cooperating with other agencies active in the region, and form the One CROP+ group with UNEP and UNDP.