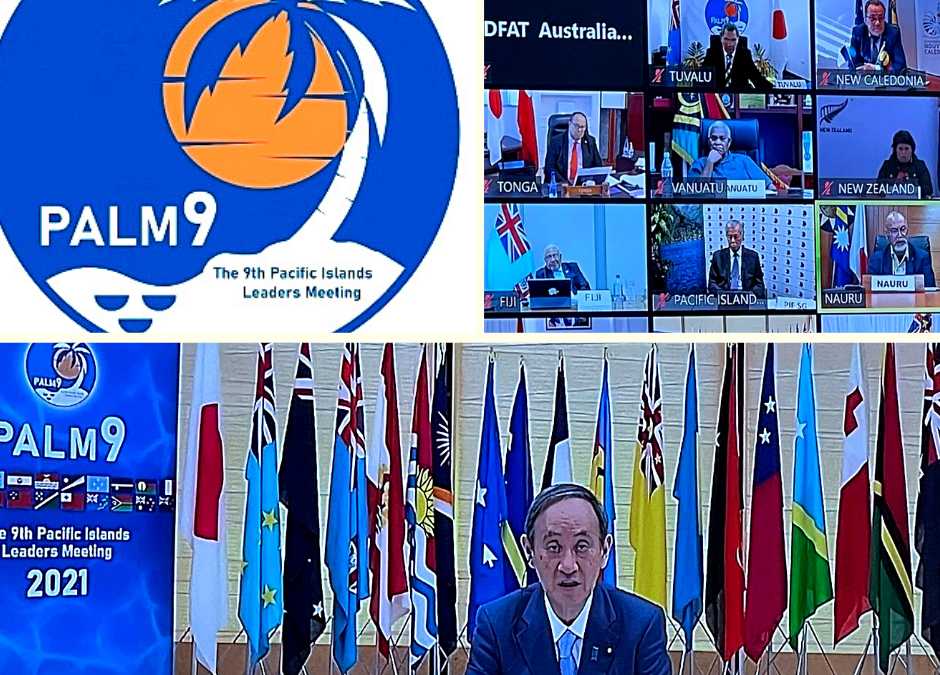 3. As fellow Pacific citizens, the PALM Leaders discussed their visions for the Pacific region as articulated under the PIF’s Framework for Pacific Regionalism and Japan’s Free and Open Indo-Pacific, recognising common values such as freedom, democracy, and the rule of law and shared priorities referred to in paragraph 7 of this Leaders Declaration, as the basis for strengthening the PALM partnership.

4. Prime Minister Suga welcomed the PIF’s efforts to strengthen Pacific regionalism as one Blue Pacific and to develop the 2050 Strategy for the Blue Pacific Continent under the Framework for Pacific Regionalism. The PIF Leaders welcomed Prime Minister Suga’s announcement of Japan’s Pacific Bond (KIZUNA) Policy, which would further strengthen the cooperation between Japan and the FICs through “All Japan” efforts based on Japan’s Free and Open Indo-Pacific vision, including through Japan’s Interagency Committee for Promoting Cooperation with Pacific Island Countries. The PALM Leaders acknowledged that these respective efforts by the PIF and Japan contribute to realising their visions for the region.

5. Prime Minister Suga explained that Japan has fulfilled its PALM8 commitment to robust development assistance as well as human resource development and people-to-people exchanges as detailed in Annex 1: Factsheet—Japan’s support since PALM8. The PIF Leaders expressed their appreciation for the steady and effective implementation of Japan’s commitment.

6. Prime Minister Suga announced Japan’s commitment to the continuation of its robust development assistance and more than 5,500 people-to-people exchanges and human resource development for the next three years. The PIF Leaders welcomed Japan’s continued cooperation under the PALM partnership.

7. To strengthen the PALM partnership and achieve their visions for the region, the PALM Leaders expressed their commitment to working together on five priority areas of cooperation for the next three years. The PALM Leaders endorsed a joint action plan to provide direction for concrete cooperation between Japan and the PIF Members and to ensure that the PALM process is action-oriented. (refer: Annex 2: Joint Action Plan for Strengthening Pacific Bonds and for Mutual Prosperity.)

Priority Areas of Cooperation 1: COVID-19 Response and Recovery
8. The PALM Leaders recognised the devastating health and socio-economic impacts of the COVID-19 pandemic with these impacts likely to continue for years to come and reaffirmed their full commitment to the 2030 Agenda for Sustainable Development including Universal Health Coverage and the Paris Agreement as the blueprints for building back better from the pandemic. The PALM Leaders emphasised the importance of cooperating to promote early access to safe and effective COVID-19 vaccines, strengthen health care systems of the FICs and support an economic recovery that is climate-resilient and environmentally sustainable. In this context, the PIF Leaders welcomed Prime Minister Suga’s announcement at PALM9 that Japan intends to provide a total of approximately 3 million doses of COVID-19 vaccines to FICs by around the end of the year including through the COVAX Facility after the middle of July 2021.

9. The PALM Leaders also stressed the importance of ensuring human security in effectively responding to various challenges and expressed their commitment to work together to build back better from the COVID-19 pandemic. The cooperation between Japan and the PIF Members on COVID-19 response and recovery also reflects the Tuvaluan concept of te fale-pili, which means that houses in close proximity have a moral responsibility to support each other in times of hardship.

Priority Areas of Cooperation 2: Sustainable Oceans based on the Rule of Law

10. The PALM Leaders emphasised their renewed and strengthened commitment to the importance of free, open and sustainable maritime order based on the rule of law that will contribute to peace, stability, resilience, prosperity, ocean health and resource sustainability of the region. To this end, the PALM Leaders reiterated their commitment to the sustainable management, use and conservation of the ocean and its resources, based on the best available scientific information, so that future generations can continue to care for, invest in and benefit from the ocean. The PALM Leaders emphasised the importance of protecting the ocean from harmful plastics and threat posed by the presence of nuclear waste, radioactive and other contaminants, shipwrecks and World War II relics. The PALM Leaders, noting regional policy frameworks, welcomed continued cooperation on marine pollution and litter; maritime security and safety; eradication of illegal, unreported and unregulated (IUU) fishing; and sustainable use of fisheries resources in the Pacific such as through mutually beneficial fishing arrangements. To ensure the sustainable management of fisheries, Japan noted the commitment of the PIF Leaders in implementing zone based management within their Exclusive Economic Zones in accordance with international law including the 1982 United Nations Convention on the Law of the Sea (UNCLOS).

11. The PIF Leaders highlighted the priority of ensuring international consultation, international law, and independent and verifiable scientific assessments with regard to Japan’s announcement related to the discharge of the Advanced Liquid Processing System (ALPS) treated water from the Tokyo Electric Power Company’s Fukushima Daiichi Nuclear Power Station into the Pacific Ocean. PIF Members committed to pursue independent guidance to interpret the scientific evidence as it becomes available. Prime Minister Suga reiterated that the discharge of the ALPS treated water would be conducted while firmly ensuring no harm to the environment and human health, and Japan would continue to provide the PIF Members with explanations based on scientific evidence, in a highly transparent and timely manner and in close cooperation with the International Atomic Energy Agency. The PIF Leaders welcomed Japan’s intent of ensuring transparency and continuing close dialogue with the PIF Members to clarify all issues.

12. The PALM Leaders reiterated the importance of all states respecting international law as reflected in UNCLOS, which grants States certain rights and freedoms in the uses of the oceans, including for instance, the freedoms of navigation and overflight through or over the high seas and exclusive economic zone, and other internationally lawful uses of the seas. The PALM Leaders also emphasised the importance of states establishing their maritime zones in accordance with the relevant provisions of UNCLOS, exercising self-restraint and resolving disputes by peaceful means, without resorting to the threat or use of force, in accordance with international law in particular UNCLOS. The PALM Leaders jointly noted the importance of protecting maritime zones established in accordance with UNCLOS, and concurred to further discuss the issue of preserving maritime zones, properly delineated in accordance with UNCLOS, in the face of climate change-related sea level rise including at the multilateral level.

Priority Areas of Cooperation 3: Climate Change and Disaster Resilience
13. Against the backdrop of the climate crisis facing FICs, the PALM Leaders reiterated the importance of all the parties to the United Nations Framework Convention on Climate Change (UNFCCC) addressing climate change with a heightened sense of urgency and ambition with efforts to limit the temperature increase to 1.5°C above pre-industrial levels, noting the recent findings of the Initial Nationally Determined Contribution Synthesis Report by the UNFCCC that current levels of climate ambition will not achieve the goals of the Paris Agreement as well as the calls of the Kainaki II Declaration for Urgent Climate Change Action Now.

14. The PALM Leaders expressed their commitment to strengthening their leadership role in climate change discussions in the international arena to achieve the goals of the Paris Agreement, noting that the COVID-19 pandemic should not delay global momentum and ambition. In this context, the PIF Leaders welcomed Prime Minister Suga’s announcement in October 2020 that Japan aims to reduce greenhouse gas emissions to net-zero and realise a carbon-neutral, decarbonised society by 2050, as well as his announcement in April 2021 that Japan aims to reduce its greenhouse gas emissions by 46% in fiscal year 2030, from its fiscal year 2013 levels, and continues its strenuous efforts to meet the goal of cutting its emission by 50% in fiscal year 2030 from 2013 levels. The PALM Leaders affirmed their commitment to cooperating closely in supporting the capacity of the FICs to respond to the impacts of climate change including continuous support for adaptation, in strengthening resilience against disasters such as through resilient infrastructure and in supporting renewable energy, in alignment with the Framework for Resilient Development in the Pacific. Prime Minister Suga welcomed PIF’s efforts in building resilience to climate change and disasters including through the Pacific Resilience Facility.

Priority Areas of Cooperation 4: Strengthening Foundation for Sustainable and Resilient Economic Development
15. The PALM Leaders shared the recognition that continued cooperation to strengthen the foundation for sustainable and resilient economic development is critical. The PALM Leaders expressed their intent of continued cooperation in developing quality infrastructure, including digital and physical connectivity, promoting trade, investment and tourism, growing local industries and strengthening fiscal resilience. The PALM Leaders underscored the importance of developing quality infrastructure in accordance with international standards such as openness, transparency, economic efficiency in view of life cycle cost and debt sustainability, which also respects sovereignty and peaceful use of such infrastructure.

Priority Areas of Cooperation 5: People-to-People Exchanges and Human Resource Development
16. The PALM Leaders reaffirmed that active people-to-people exchanges between Japan and the PIF Members are a critical foundation of this important and enduring PALM partnership. The PALM Leaders also emphasised that human resource development in a variety of fields and sectors contributes to the long-term sustainable growth of the Pacific Islands region, as well as the enhancement of the bond between Japan and the FICs.

Cooperation in the International Arena
17. The PALM Leaders expressed their commitment to continuing cooperation between Japan and the PIF Members on initiatives and efforts in the international arena. In this context, the PALM Leaders expressed their support for the holding of the Olympic and Paralympic Games Tokyo 2020 in a safe and secure manner this summer as a symbol of global unity in overcoming COVID-19.

18. The PALM Leaders stressed the importance of efforts to achieve North Korea’s complete, verifiable and irreversible dismantlement of all weapons of mass destruction and ballistic missiles of all ranges in accordance with United Nations Security Council (UNSC) resolutions, and called on North Korea to take concrete actions toward that goal. The PALM Leaders reaffirmed their commitment to fully implementing and enforcing the UNSC resolutions, including addressing North Korea’s sanctions evading tactics such as “ship-to-ship transfers”. The PALM Leaders emphasised the continued importance of addressing humanitarian concerns, including the immediate resolution of the abductions issue.

19. The PALM Leaders expressed their determination to contribute to reforms of multilateral institutions, including the United Nations for further effectiveness, openness, transparency and accountability and to strengthen and reform the World Health Organisation to ensure it remains fit for purpose. The PALM Leaders stressed the importance of an early reform of the UNSC. They reaffirmed the need to further enhance the legitimacy, effectiveness and representativeness of the UNSC to better reflect the realities of the international community in the twenty first century and reiterated their commitment to pursuing launching text-based negotiations without delay. In this regard, Prime Minister Suga expressed appreciation for the PIF Members’ continued support for Japan’s bid for permanent membership in the UNSC.

Way Forward
20. The PALM Leaders renewed their determination to continue and strengthen this important and enduring PALM partnership and to together achieve their visions for the Pacific region. The PALM Leaders decided to hold the Ministerial Interim Meeting (MIM) before PALM10 to follow up on key outcomes of PALM9 in preparation for PALM10. Prime Minister Suga welcomed PIF Leaders’ offer to host the next PALM MIM in the Pacific Islands region. The PIF Leaders welcomed Prime Minister Suga’s proposal to host PALM10 in Japan, noting the importance of face-to-face interaction among the PALM Leaders, which would be reactivated as soon as international travel comes back to normal.–ENDS
Footnote: The Federated States of Micronesia, the Republic of Kiribati, the Republic of the Marshall Islands, the Republic of Nauru, and the Republic of Palau announced in February 2021 of their withdrawal from the Pacific Islands Forum.