“I’ve done what I could do. Now you all have to keep going”–Remembering Sir Mekere Morauta 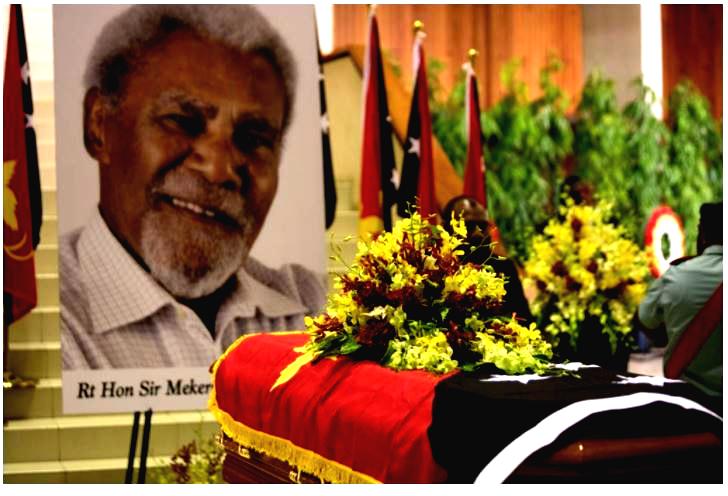 The new year began on a solemn note for the people of Papua New Guinea, who spent the first week of January paying respects and tributes to former prime Minister the late Sir Mekere Morauta, who was laid to rest on Independence Hill, Port Moresby on January 8th,  2021. As part of their coverage, PNG’s first TV station EMTV did tribute interviews remembering ‘Sir Mek’ –amongst them, Online Editor Ruth Rungula spoke to Forum Secretary General, Dame Meg Taylor. Listen to the interview, transcript below.

Ruth Rungula EMTV –Dame Meg- we know Mekere contributed, (as ) the chair of the Pacific plan review and with you at the helm of the Pacific Island forum now, what regional legacy will Sir Mekere Morauta be most remembered for?

Dame Meg –I believe that the reform of the Pacific plan and the inception of the framework for Pacific regionalism, which I was asked to implement, this came from the work that Sir Mekere Morauta did, in consultation with people through the Pacific and governments. That will be his legacy here in this region, that what he emphasized was that it was important that the conversations and deep conversation about regionalism continued, that politics be brought back into the region, and that the voice of the people be heard– that their concerns be listened to, by leaders and by governments, so that the concerns people had at that time –and the years were actually around, I believe 2013 2014 is when it was adopted–and those concerns which were expressed to him at that time, it’s interesting–are still very, very much on the minds of people now. Those issues being about people losing their customs, their concerns about the sovereignty of their own countries, also about their futures, and the resilience of this region. And about the emergence of geopolitical interference in the affairs of this region. And those issues are still the same now.

Ruth Rungula EMTV –What special qualities did Sir Mek bring to this task, and the outcomes of that review?

Dame Meg–Sir Mekere came from a background where he was Head of Department of Finance. But he was a very capable bureaucrat. He was also a leader of a country and had served as prime minister. He had a very strong knowledge of governance. So those qualities helped him to lead a team where he could understand how governments worked, what people wanted of their governments, what was required, of the governance arrangements, and as a political leader, how to be able to communicate that–the issues that people raised with him and governments raised with him –with the Pacific Island Forum, which is the leadership of this region. So he was a great listener, and a man who had a great intellect, and all those years of experiences that he had in Papua New Guinea and internationally, he was then able to bring, I think, to a greater understanding of the issues that people in the region were concerned about.

Ruth Rungula EMTV–How would you describe his contribution to the region in developing this blueprint document for the region, which will last for a lifetime? How do you describe that?

Dame Meg –Well, I don’t think the framework for Pacific regionalism was actually a blueprint for the 2050 strategy that has been developed now. But I think what Sir Mekere from his experiences would be thinking that what he crafted as a framework for Pacific regionalism or aspects of that, will be important and useful by generations now. And generations going into the future. The Pacific that he founded, and that he was talking to in 2013 and 2014, and now where we are at 2020 and going into 2021–there are differences. You have a very vocal civil society, you’ve got a youth population that’s concerned about its future. And the issues that he raised around politics, and the political conversations that have to be made — the political settlements that have to be reached by leaders, and the understanding of what people were concerned about the inclusivity of people and civil society and that in public policy processes, all these I’m sure, as governments work towards the development of the 2050 strategy, have had some influence.

Ruth Rungula EMTV –Back to PNG, and you being from Papua New Guinea, –what pause of reflection must Sir Mekere’s passing give to the current and the imagined leaders of PNG?

Dame Meg –Well, I think that what we take from a man like Sir Mekere Morauta, a man of great intellect, but also a man of great integrity, who understood, I think, what it meant to be able to look at systems or structures and structures of governance that would serve his people in Papua New Guinea. And he did that through the reforms, through the financial sector reforms, the work that he did on the banking system, on superannuation, but also going further into the reforms in the Defense Force, what he thought and believed was important so that we could make every effort to have a country that we could run, and run efficiently. And his voice, particularly around corruption, and what it was doing to our country– he will be remembered for that. But the point now is for us as people and Papua New Guineans is– remembering Sir Mekere, in the best way we can, is to act on what he has left for us. I know and I think that in my friendship with him, he would say–“I’ve done what I could do. Now you all have to keep going”–and believing all along, that we would be able to build a much stronger and fairer country.

Ruth Rungula EMTV –And finally Dame Meg, thanks for your time–Every tribute comes with a story. What would your story about Mekere be?

Dame Meg–Mekere was a very good friend. And somebody that was kind, gracious, one who shared his knowledge. That was there when families needed his support and he and Lady Morauta and their generosity and kindness to my family– when my mother was very ill (their help) gave me another five years of our mother’s life with our family. But he belongs in everyone’s heart in a different way, as we knew him. I was very much in awe of his knowledge. But he was a great listener, and a great teacher too. And a man that leaves a legacy for the future, a man that belongs to the nation of Papua New Guinea and it’s been a privilege for me to have had him in our lives and in my life.