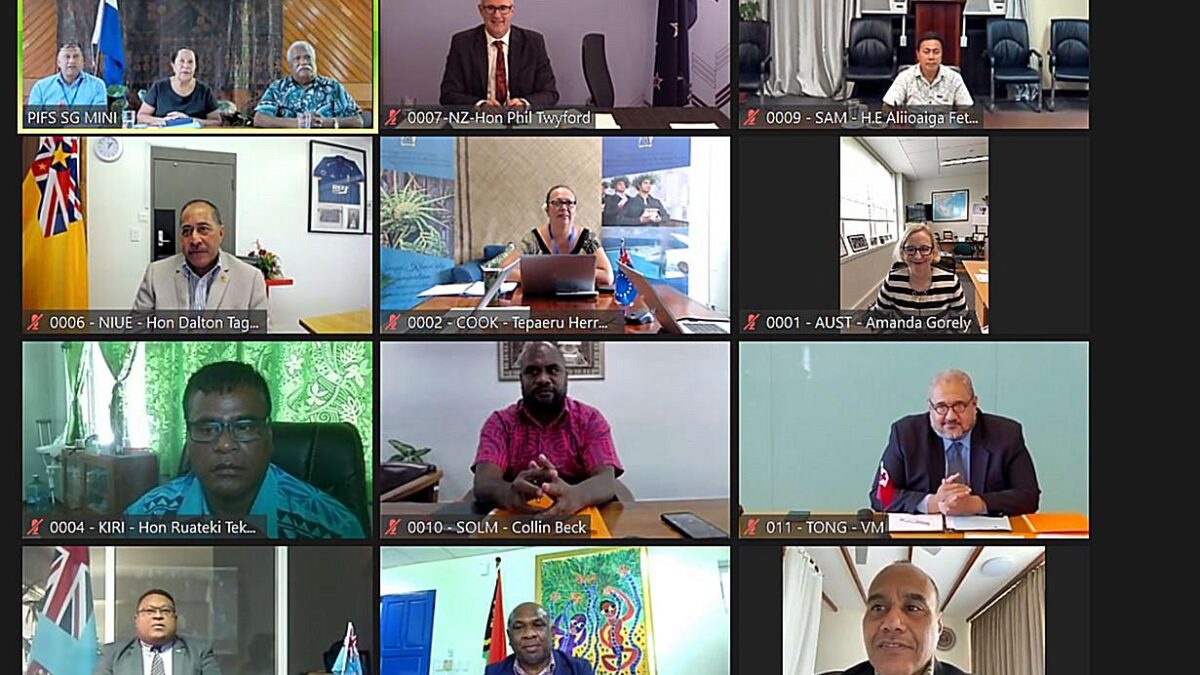 1. We welcome as Observers of this First Meeting Forum Member non-Parties, the Federated States of Micronesia, French Polynesia, New Caledonia, Palau, and the Republic of the Marshall Islands; and representatives of the United Nations Office of Disarmament Affairs and representatives of other nuclear weapons free zones.
2. Our Meeting responds to the call by Pacific Islands Forum Leaders (“Forum Leaders”), at their 50th Meeting held in Tuvalu in 2019 for the operationalisation of the provisions of the Treaty, as necessary. In convening this Meeting, we reflect on the Treaty’s achievements and call for action to further advance the objectives and implementation of the Treaty as an important framework for regional and international cooperation on nuclear issues, and as a contribution of our region to the common global goal of the non-proliferation and elimination of nuclear weapons.
STRATEGIC CONTEXT
3. We refer to the South Pacific Nuclear Free Zone (“Zone”) as encompassing ocean space and land territory of significant maritime and geostrategic influence, and re-emphasise our determination to ensure that the bounty and beauty of the ocean space, the land territory and the airspace above them shall remain the heritage of our peoples and our descendants in perpetuity to be enjoyed by all in peace.
4. We renew our commitment to the Treaty through our Blue Pacific identity, the 2018 Boe Declaration on Regional Security, and our work to secure the Blue Pacific Continent against nuclear threats.
5. We highlight that the COVID-19 pandemic, in addition to serving as a reminder of the very personal nature of global catastrophic risk, has shown the consequences of failing to anticipate, plan for, and prevent catastrophic events. In this way, it also shines a light on the ongoing nuclear challenge that global society faces, with the effects of a nuclear incident posing a greater risk to all of mankind and the environment.
6. Notwithstanding the overall reduction in nuclear weapon arsenals since the time the South Pacific Nuclear Free Zone Treaty was adopted, we note with concern that as of the beginning of 2020, it is reported that nine states (the United States, Russia, the United Kingdom, France, China, India, Pakistan, Israel and the Democratic People’s Republic of Korea – DPRK) possessed approximately 13,400 nuclear weapons. Approximately 1,800 of these are kept in a state of high operational alert.

35 YEARS OF THE TREATY OF RAROTONGA
KEY ACHIEVEMENTS
7. We commemorate the 35th Anniversary of the adoption of the Treaty by Forum Leaders at their 16th Forum Meeting held in Rarotonga, Cook Islands on 5 – 6 August 1985, and the 34th Anniversary of its entry into force on 11 December 1986. We also acknowledge the permanent cessation of nuclear testing in the region 24 years ago, marking the end of all nuclear testing in a region which had been subjected to both atmospheric and underground testing for five decades.
8. We recall the principles agreed by Leaders in 1985 for the establishment of the Zone, and also recall the Treaty being a product of strong regional consensus, delivered through cooperation and determination to expunge the nuclear threat from the region.
9. We highlight the success of the Zone in promoting international peace and stability by prohibiting the manufacture, acquisition, possession or control of nuclear explosive devices, preventing the stationing and testing of nuclear explosive devices, and preventing the dumping of radioactive wastes and other radioactive material.
10. We reflect on key achievements, being the ratification of the Treaty by the thirteen States within the Treaty area by the end of 2000, as well as signature of the Protocols by all five nuclear weapon states by 1996, with the US being the only remaining nuclear weapon state yet to ratify the three Protocols to the Treaty.
11. As the world’s second nuclear weapons free zone in a populated area, we acknowledge the Treaty having served as a source of inspiration for other regions in the world, and is a key endowment of the Pacific Islands Forum to the region and the global community. We are encouraged by the existence of five nuclear weapon-free-zones (NWFZs), the institution of NWFZs being an important provision of the landmark 1968 Treaty on the Non-Proliferation of Nuclear Weapons (NPT); and commit to continued cooperation with other NWFZs in pursuit of our common interests and objectives.
12. We also recognise the 1986 Convention for the Protection of the Natural Resources and Environment of the South Pacific Region (Noumea Convention) and related Protocols, the 1995 Convention to Ban the Importation into Forum Island Countries of Hazardous and Radioactive Wastes and to Control the Transboundary Movement and Management of Hazardous Wastes within the South Pacific Region (Waigani Convention), and the 1995 Lakatoro Declaration on Oceania Cooperation Regarding Denuclearisation in the South Pacific made by the Leaders of the Melanesian Spearhead Group; these treaties promoting and re-emphasising the objectives of the Treaty of Rarotonga.
13. We reaffirm unity in our continued commitment to a nuclear free Pacific and a nuclear weapons free world, and further reaffirm our determination for a region free of environmental pollution by radioactive wastes and other radioactive matter.

ONGOING TREATY CHALLENGES
14. We recall that the endorsement of the Treaty reflected the deep concern of Pacific Island Forum Members at the continuing nuclear arms race and the risk of nuclear war at the time, not only for the people of the Pacific but for all of humanity.
15. We underline our grave concern over the continuing threat of nuclear weapons proliferation and its risk to the peace and security of our planet; and stress that their total elimination remains the highest disarmament priority of the United Nations.
16. We call for an end to all actions inconsistent with Article VI of the NPT, such as the qualitative improvement of existing nuclear weapons and the development of new types of such weapons.
17. We recall concerns regarding the transport of radioactive materials through the region; and encourage shipping States to progress the proposals that Parties have developed for innovative arrangements and assurances.
18. We recall Forum Leaders’ decisions relating to DPRK nuclear issues, and reiterate the Leaders’ decision in 2017 to condemn any efforts by the DPRK to test nuclear weapons and ballistic missiles. We re-emphasise the importance of ensuring full implementation of relevant UN Security Council Resolutions, including UNSCR 1718, and further commit to deregister any DPRK trading or fishing vessels currently flagged on Pacific states’ shipping registers.
19. Acknowledging Japan’s efforts to date and its engagement with the International Atomic Energy Agency (IAEA), we recall concerns about the environmental impact of the Fukushima Daiichi Nuclear Reactor accident in 2011, and urge Japan to take all steps necessary to address any potential harm to the Pacific.

REAFFIRMATION OF OUR COMMITMENT TO THE TREATY OF RAROTONGA
20. We recall the announcement by the US in 2010 of its intention to ratify all Protocols to the Treaty; and call on the US to ratify as soon as possible the Protocols and to renew its commitment to reduce nuclear threats.
21. We commit to promoting membership of the Treaty by all Pacific Island Forum Members in accordance with Article 12(3) of the Treaty in order to secure the Blue Pacific against nuclear contamination and other threats in view of ongoing nuclear legacy issues; and accordingly welcome and encourage other Forum Members to accede to the Treaty.
22. We recognise that to realise the security of the Zone, which forms an integral part of the Blue Pacific Continent, we call on other States to take all appropriate measures within their territory, jurisdiction or control to prevent significant transboundary harm to the territory of another state, as required under international law.
23. In pursuit of universal disarmament, we reaffirm the importance of key multilateral treaties, in particular the NPT which represents a key binding commitment in a multilateral treaty to the goal of disarmament by the nuclear weapon States; and we strongly call on all nuclear weapon States to comply with Article VI of the NPT and with the commitments emanating from the NPT Review Conferences.
24. We commit to work in close consultation with other states and organisations, including with other NWFZs, in the lead up to the Review Conference of the Parties to the NPT in 2021.
25. We reiterate the ongoing calls by Forum Leaders for remaining countries to sign and ratify the 1996 Comprehensive Nuclear-Test-Ban Treaty.
26. Noting the impending entry into force in January 2021 of the 2017 Treaty on the Prohibition of Nuclear Weapons, Members recalled the signature and ratification of that Treaty by the Cook Islands, Fiji, Kiribati, Nauru, New Zealand, Niue, Palau, Samoa, Tuvalu and Vanuatu, and encouraged individual Member countries to progress efforts, as they deem appropriate.
27. To advance the Forum Leaders’ 2019 decision to operationalise the Treaty, and the objectives and implementation of the Treaty, we call for the convening in 2021 of the Consultative Committee, pursuant to Article 10 and Annex 3 of the Treaty, to consider practical means of operationalising the Treaty.