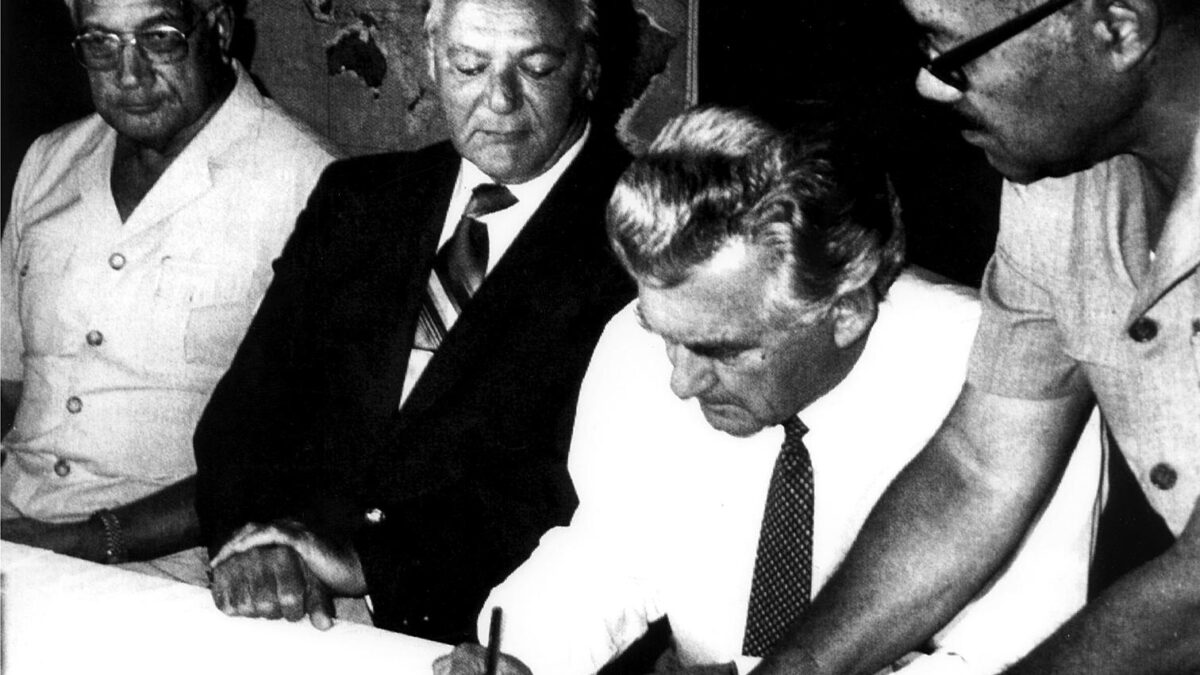 Prime Ministers of Fiji, the Cook Islands and Australia at the adoption of the Rarotonga Treaty, in August 1985. Image: supplied.

PIF HQ, Suva, FIJI, Monday 14th December 2020-- The States Parties to the South Pacific Nuclear Free Zone Treaty (“Rarotonga Treaty”) will convene their first ever meeting tomorrow, 15 December 2020.  The meeting is in response to the call by Pacific Islands Forum Leaders at their 50th Meeting, held in Tuvalu in 2019, to operationalise the provisions of the Treaty.

Following its adoption at the 16th Forum Leaders meeting in the Cook Islands, the Treaty was only the second of its kind—today there are five such regional nuclear free zones covering 116 nations.

The depositary of the Treaty, the Pacific Islands Forum Secretary General, Dame Meg Taylor, says the meeting is a milestone opportunity to commemorate the 35th year of the adoption of the Treaty (6 August), and the 34th anniversary of its entry into force (11 December), to reflect on the Treaty’s achievements and to advance the objectives and implementation of the Treaty as a contribution of our region to the common global goal of the non-proliferation and elimination of nuclear weapons.

“The Rarotonga Treaty is one of our very first and most significant achievements as the Forum family. It is a powerful testament to what we can achieve through regionalism, through collective action, under the framework of international law, and in conforming to the rules-based international order, to which we all subscribe,” said Dame Meg.

Forum non-parties to the Treaty, the United Nations and other regional nuclear free zone representatives have been invited as Observers to the meeting.

Peace and security priorities feature prominently in the Leaders discussions in 1985  and milestones of the last three decades are expected to provide the starting point for discussions by States Parties.  These include the status of the Rarotonga Treaty  and its Protocols, and linkages to  global multilateral treaties such as the 2017 Treaty on the Prohibition of Nuclear Weapons, which becomes legally binding next year, and the 1996 Comprehensive Nuclear-Test-Ban Treaty, which is not yet in force.