Statement by the Hon. Simon Kofe at the Regional Conference on Securing the Limits of the Blue Pacific: Legal Options and Institutional Responses to the Impacts of Sea Level Rise on Maritime Zones, in the Context of International Law 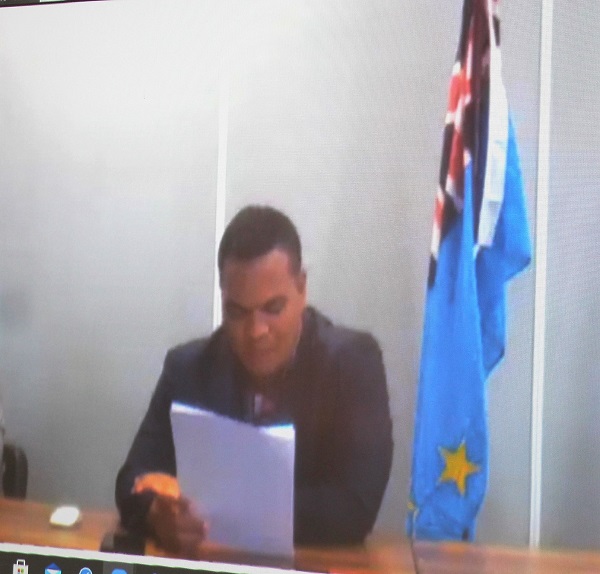 I would like to take this opportunity to express my profound gratitude to the Pacific Islands Forum Secretariat for your hard work in organizing this regional conference to discuss legal options and institutional responses to the impacts of sea-level rise on maritime zones.

Pacific Island States are Big Ocean Countries that form the largest oceanic continent in the world. Collectively as a region, we have been entrusted by God with the stewardship of the Pacific Ocean. It is the Ocean that connects our cultures, identities, resources and development aspirations. In Tuvalu, we have recently highlighted the importance of our cultural principles of falepili, or being a good neighbor, and kaitasi, or shared ownership. Given our shared interest in and stewardship over the Ocean, it is necessary for Pacific Island States to collaborate and take collective action against the threat climate change poses to our Blue Pacific Continent.

Aside from the humanitarian crisis, climate-change-induced sea-level rise also poses a legal threat to our maritime-zone entitlements and our statehood status under international law. UNCLOS, which established the regime of various maritime zones, never considered the effect of sea-level rise on baselines, and therefore it is unclear whether baselines are fixed or not. Another equally important legal question is whether Pacific Island States can retain their statehood status under international law in the absence of a permanent population or physical land territory.  These, and other legal issues, led the Forum Leaders, in 2019, to commit to a collective effort to develop international law with the aim of ensuring that once a PIF Member’s maritime zones are delineated in accordance with UNCLOS, that Member’s maritime zones cannot be challenged or reduced as a result of sea-level rise and climate change.

At the national level, Tuvalu heeded this call to action with urgency. In our 2020 Tuvalu Foreign Policy, Te Sikulagi, Tuvalu insists that all countries forming relations with Tuvalu recognize the statehood of the nation as permanent and its existing maritime boundaries as set regardless of the impacts of sea-level rise. It is my view that politics play an important role in securing and maintaining recognition on the international plane. As we have seen from history during World War 2, the continued existence of de-territorialized states depended entirely on their recognition by third states.

I take this opportunity to urge Pacific Island States to take unilateral action to enact policies and legislation that support the legal proposition put forward by Forum Leaders in their meeting in Tuvalu in 2019. I want to emphasize here that what we do on the national level is equally important, if not more important, than what we do on the international plane. This is because the formation of customary international law that is favourable to the Pacific is dependent largely on the state practice of Pacific Island States whose interests are specifically affected. With this perspective, we need not wait for the global community to respond to our calls; we can take action now to secure the limits and future of the Blue Pacific.

Our Leaders have registered their concerns on the threat posed by sea-level rise to securing our vision for a united Blue Pacific. We, as the people of the Pacific, should continue to take seriously our role as custodians of the Ocean and our responsibility to provide shared stewardship for the Ocean. This role stems from our centuries-long connection with the sea.

To conclude, I would like to encourage all participants to consider strategic options that can be adopted to spur action given the leading role we currently play in the International Law Commission process and to supplement other efforts to develop a legal response to sea-level rise. We must crystallize recent developments in international law and actively frame the terms of the debate on this issue both factually and legally. I firmly believe that these efforts will increase global attention to sea-level rise and provide leverage for important diplomatic negotiations in the future. In recognition of today’s interconnected global context, Tuvalu sees nations, governments and people as maintaining responsibilities toward each other rather than pursuing short term national interests. Our collective efforts on international law and maritime zones reflect how the Pacific strives toward responsible regional relationship-building and consensus that will secure our sustainable future.

With those remarks I would like to thank you Chair and wish you all the best in your deliberations this week.