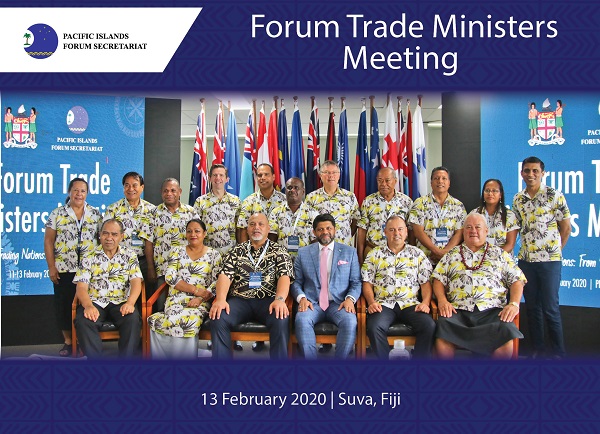 SUVA, Fiji:Forum Trade Ministers and Officials converged from 11 to 13 February 2020, in Suva under the theme ‘Pacific Trading Nations: From Surviving to Thriving’.
The Forum Trade Ministers Meeting (FTMM) was preceded by Pacific  States of the African Caribbean Pacific (PACP) Trade Ministers Meeting and the Officials meetings for both Pacific ACP and FTMM.
In his opening statement at FTMM, the Acting Prime Minister and Attorney-General of Fiji, Hon. Aiyaz Sayed-Khaiyum, reminded the Trade Ministers that a lot had changed since the last meeting in 2015. On the global scale, rules based trading system is being questioned, protectionism is dampening the global trade flows, there is a rise in geopolitical tensions and the threat of climate change looms upon us aggressively. He further highlighted the importance of the focusing on new markets of Asia, and further explore the opportunities available through labour mobility.  Hence, as Trade Ministers, it was vital that they worked in a united and collaborative manner to have a strong regional bloc that is lucrative to larger trading partners.
In her introductory remarks, Chair of  FTMM, Honorable Premila Kumar, Minister for Industry, Trade, Tourism, Local Government, Housing and Community Development, reemphasised that the current trading environment requires urgent and continued dialogue and solidarity so as to ensure the region addresses its trade priorities with one voice.
Speaking from a regional and current geopolitical perspective, the Secretary General of the Pacific Islands Forum, Dame Meg Taylor reiterated the need for the Forum to leverage its collective power to protect its valuable and strategic space which holds unprecedented trade and investment opportunities. The Secretary General noted the urgent need for a long-term strategy to deliver Forum Leaders vision
Key outcomes of the 2020 FTMM include: endorsement of the Pacific Aid for Trade Strategy (PAfTS 2020-2025), the region’s blue print that will guide coordination and mobilization of resources towards four priority areas: e-commerce; connectivity; deepening forum markets (in the context of Quality Infrastructure and Trade Facilitation); and trade in services. Ministers also discussed enhancing governance of regional labour mobility; and linkages between trade and environment to reduce the production and consumption of Hydrofluorocarbons, and Trade and Health, in particular, implications of trade on the increasing incidence of Non-Communicable Diseases in the Pacific Region.
Trade Ministers welcomed the innovative and comprehensive Pacific Quality Infrastructure initiative which will be coordinated by PIFS as Main Implementing Entity (MIE), and called-up development partners to cooperate with the Secretariat in the implementation of the Regional Quality Infrastructure initiatives.
Trade Ministers supported the prioritisation of more environmentally friendly regional and national trade policies in alignment with the Kigali Amendment to the Montreal Protocol; and reflected on interlinkages between Trade and Health in the context of fighting against trade-related Non-Communicable Diseases and new products such as e-cigarettes.
Pacific ACP Trade Ministers met in the margins of the FTMM and discussed number of crucial issues including the future of the Pacific ACP-EU relations under the Cotonou Partnership Agreement successor framework, revisited the suspended comprehensive EPA, the future of the Pacific ACP configuration, and Pacific preparations for the forthcoming 12th World Trade Organisation (WTO) Ministerial conference. Following the Pacific ACP Trade Ministers meeting, the Regional Authorising Officer (RAO) and European Union signed Euro 94 million aid for trade financing agreements, which will support Pacific Regional Integration and private sector development initiatives for the next 5 years.
The overarching message for this year’s FTMM was the need to consider a range of sustainable development challenges faced by the Pacific region to enable formulation of coherent economic, social and environmental regional strategies and policies that are inclusive, promotes regional economic integration, strengthens connectivity and leads to export-led growth, increased investment in priority areas and decent work opportunities in the region.
[ENDS]
Media Contact:
Nandni Vandhana, Communications and Public Affairs, Pacific Islands Forum Secretariat
Email: nandniv@forumsec.org
Natalyn Lakhan, Communications Coordinator, Ministry of Industry and Trade -Fiji
Email: lakhan.natalyn@gmail.com