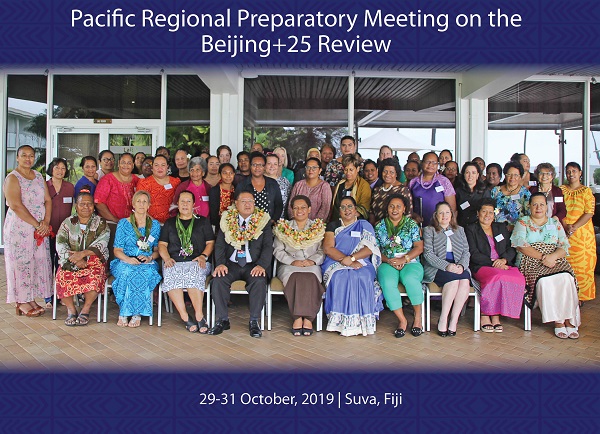 Suva, Fiji: Pacific governments, civil society and regional organisations are meeting this week to review Pacific commitments towards advancing gender equality at the Pacific Preparatory Meeting for the Beijing +25 Review.
The Preparatory meeting is an opportunity for Pacific governments to reflect on their achievements in gender equality over the past 25 years, and to fine tune communication of Pacific positions on gender equality priorities in advance of next month’s Asia-Pacific Intergovernmental Ministerial Conference on the Beijing +25 review in Thailand. The meeting will also help Pacific governments in their preparations for key events in 2020 such as the 64th Session of the Commission on the Status of Women (CSW64) in March 2020 and the Global Equality Forums in Mexico (May 2020), France (2020) and the UN General Assembly in September 2020.
The Pacific Preparatory Meeting is hosted by the Government of Fiji’s Ministry of Women, Children and Poverty Alleviation in partnership with the Pacific Community (SPC), the Pacific Islands Forum Secretariat (PIFS), and UN Women, in collaboration with the Fiji Women’s Rights Movement and DIVA for Equality Fiji.
Developed at the Fourth World Conference on Women in Beijing, China in 1995, the Beijing Declaration and Platform for Action (Beijing Platform for Action) set an agenda for the empowerment of women and girls, globally. Next year will be the 25th Anniversary of this declaration and will see governments and civil society organisations reflecting on the gains made to achieve gender equality and human rights, as well as the gaps where gender equality has not been achieved.
“As Pacific Island Countries, we need to commit to a few things, be united in full reaffirmation of the Beijing Platform of Action, build stronger regional consensus to advance gender equality and form coalitions that will take meaningful actions forward with urgency and accountability- regionally and globally. The Government of Fiji is committed to work closely with you all in this endeavour,” said Fiji’s Minister for Women, Children and Poverty Alleviation, Honourable Mereseini Vuniwaqa.
The Beijing Platform for Action was adopted by 189 governments committed to taking strategic, bold action in 12 critical areas of concern: poverty, education and training, health, violence, armed conflict, economy, power and decision-making, institutional mechanisms, human rights, media, environment, and the girl child.
To achieve its commitments, PIF Secretary General, Dame Meg Taylor acknowledged the importance of collaboration and partnerships.
“Partnerships are crucial in advancing gender equality and addressing issues such as violence against women and girls. We must all work together to effectively address this issue –this is our only hope,” she said.
“2020 is a landmark year as it will also commemorate the 75th anniversary of the United Nations, the 20th anniversary of the adoption of Security Council Resolution 1325 on Women, Peace and Security, the 5th anniversary of the adoption of the Sustainable Development Goals, as well as the 10th anniversary of the creation of UN Women,” said UN Women Representative, Sandra Bernklau.
“The anniversaries provide an opportunity to take stock of the significant progress that has been achieved in the implementation of commitments for women’s rights and the inequality that persists. It is an opportune moment to evaluate how far we have come in achieving gender equality – and reflect on how much more is needed to be done. While the last 25 years has seen great progress, there are trends emerging that are blocking progress towards the implementation of gender equality commitments.”
Perspectives from civil society and the women’s movement are integral to advancing gender equality and women’s empowerment in these intergovernmental spaces, and their participation alongside government is essential.
“There is a strong commitment by Pacific governments to advance gender equality in the region, as reflected by most Pacific Island countries having ratified the global convention called the Convention on the Elimination of all forms of Discrimination against Women (CEDAW). While there has been much progress towards improving gender equality, there is still much work to be done,” said DIVA for Equality Political Adviser, Noelene Nabulivou.
The Pacific still has the lowest global percentages of women in formal leadership roles including the world’s lowest overall average of women in parliament. The Pacific also still has twice the global average of violence against women and there is a long way to go before we have addressed all forms of gender-based violence, discrimination and stigma, for all Pacific women and girls. Increasingly severe natural disasters in the region and the climate crisis further pose a risk to women and girls, and all Pacific people. While women are increasingly active in the business sector, they are still more likely to be in low wage or unpaid family employment, and women in rural and maritime areas are yet to be fully appreciated, resourced and integrated into national sustainable development plans.
-ENDS-