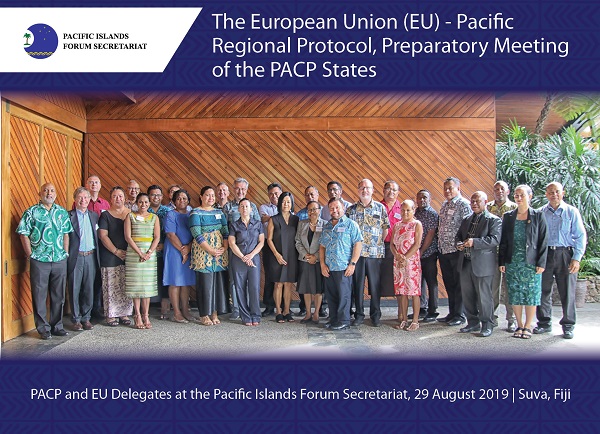 Suva, Fiji: Lead negotiators of the Pacific States of the African, Caribbean, Pacific (PACP) Group met with European Union (EU) negotiators at the Pacific Island Forum Secretariat in Suva this week to talk progress on an ambitious new partnership.  The 4th Joint Negotiations on the EU-Pacific Regional Protocol is the first to be held in the region, giving an opportunity for PACPS to meet with lead negotiators before joint negotiations from 29 August to 3 September.
The Post Cotonou negotiations were launched in September 2018 between 79 ACP countries and 28 EU member states representing more than half of all UN member countries and over 1.5 billion people.  The eventual agreement is scheduled to be signed in Samoa in 2020 and will include Regional Protocols specific to each region.
Deputy Secretary General of the Secretariat, Cristelle Pratt said the Pacific was at an important juncture of its relationship with the EU.
“We are aware that this agreement will set the tone of our relationship with the EU for the next 20 years. Through the negotiations on the EU-Pacific Regional Protocol, we will have the policy space to address and present practical solutions to our unique set of challenges, and reflect our Pacific priorities,” said Ms Pratt.
In February this year, Pacific ACP Leaders held a major roundtable with the EU where they articulated the Pacific priorities that have framed the negotiating positions for the Pacific ACP region.  These priorities include: Genuine Partnership; Oceans Governance through the Blue Pacific Identity; safeguarding the region’s resources and security; the economic potential and sustainability of the region’s fisheries resource; commitment to addressing climate changes and disaster resilience; sustainable development; and education and health.
The negotiation session builds on a Pacific ACP Regional Workshop held earlier in June which assisted the formulation of a collective and well informed position for the Pacific’s zero draft text of the EU-Pacific Regional Protocol.  The Pacific’s zero draft text is the basis which PACP lead negotiators utilised during the  series of formal negotiating sessions with the EU as part of the regional Post-Cotonou negotiations in Brussels from July.
The week of meetings includes a Pacific ACP preparatory meeting, and consultation with Non State Actors, reflecting the inclusive approach taken to negotiations.