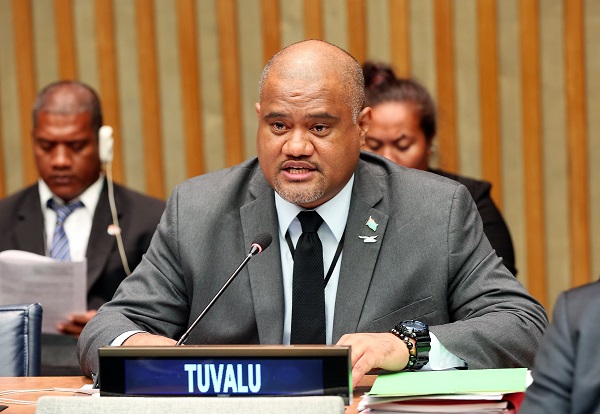 United Nations, New York – As stewards of the largest ocean space on the Blue Planet, Pacific Islands Forum Member Countries believe that new treaty on areas beyond national jurisdiction must be ambitious and act to protect marine biological diversity for future generations.
Speaking on behalf of Forum members at the opening of the third session of marine biodiversity beyond national jurisdiction (BBNJ) negotiations, Tuvalu’s Deputy Permanent Representative to the United Nations, Fakasoa Tealei, said the new instrument must rise up to meet the threats facing marine biodiversity.
“As stewards of the Ocean, we strongly believe that we cannot settle on the lowest common denominator and we certainly cannot accept the status quo. We need to be ambitious in order to stop the decline of marine biological diversity and make good the commitments made by our leaders,” said Mr Tealei.
A draft text of the treaty was released in June, known as the zero draft, is the basis of negotiations at the current session.
Negotiators from Pacific Islands Forum members are committed to ensuring the final treaty is based on informed positions which recognise the collective wisdom of oceanic people.
“It must incorporate and recognise the knowledge accumulated by indigenous peoples and local communities through the centuries.
“Indeed, for PIF members, traditional knowledge always complements science and is particularly relevant when science is lagging or lacking,” said Mr Tealei
Mr Tealei said the new instrument must be inclusive and ensure that no one is left behind, in particular Small Island Developing States, who should be better supported in their role, their rights, and their duties as stewards of the ocean.
During the opening session, many delegations, including in the Pacific, stressed the sense of urgency to finalise the future instrument by 2020.
Pacific countries are supported in these negotiations by experts from the Pacific Ocean Alliance, including from agencies of the Council of Regional Organisations (CROP), and are coordinated by the Office of the Pacific Ocean Commissioner.
The negotiations continue until August 30 2019.
[ENDS]
Media contact:
Mereseini Marau
Office of the Pacific Ocean Commissioner
mereseinim@forumsec.org