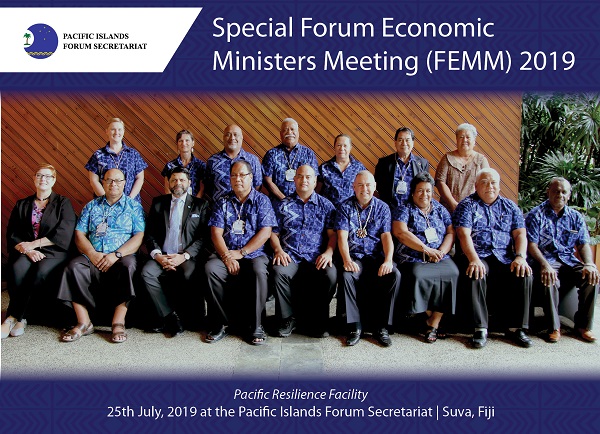 The special Forum Economic Ministers Meeting (FEMM) was held at the Forum Secretariat Headquarters, Suva, Fiji on 25 July 2019.
2.    The following Forum Member Countries were represented: Australia, Cook Islands, the Federated States of Micronesia, Fiji, French Polynesia, Kiribati, Nauru, New Caledonia, New Zealand, Niue, Papua New Guinea, Republic of Marshall Islands, Samoa, Solomon Islands, Tonga, Tuvalu and Vanuatu. The Special FEMM was a closed meeting of the Forum Members.
3.    The Special FEMM was chaired by the Honourable David Adeang, Minister for Finance of Nauru.
4.    Pursuant to the 2019 FEMM (7-9 May) decision on the Pacific Resilience Facility (PRF), the main issue for discussion by the Special FEMM was the revised proposal of the Pacific Resilience Facility. All Members represented, except one*, agreed to the recommendations below.
NICHE OF THE PACIFIC RESILIENCE FACILITY
5.    Economic Ministers noted the progress of the PRF proposal since 2017, in particular its endorsement by the Economic Ministers at the 2018 FEMM, and the 2018 Forum Leaders Meeting, as well as the work carried out to-date by the PRF Technical Working Group and the Secretariat to refine the proposal based on feedback of Economic Ministers, Member countries and other relevant stakeholders in the Pacific region.
6.    Economic Ministers considered the revised niche of the PRF which is a unique, sensible, prudent and forward-looking policy option to invest in upfront low-quantum community-level projects, intended to have high impact on the resilience of communities, over time. These small-scale, low quantum preparedness projects are not widely supported and financed by major development partners.
7.    Economic Ministers also considered and discussed the revised purpose of the PRF which is to provide predictable, sustainable, accessible and accountable funding for disaster preparedness and climate risk resilience-building within vulnerable communities.
8.    Further, Economic Ministers considered the refined objective of the PRF, to ensure all our communities are safe and to minimise the loss of lives, and the economic and social impacts from catastrophic events.
9.    Ministers:
(1) acknowledged the refinement of the PRF proposal since 2018 and 2019 FEMM and extensive progress in identifying the need for the PRF and the niche it will fill; and
(2) endorsed the purpose and objectives of the PRF.
GOVERNANCE ARRANGEMENTS OF THE PACIFIC RESILIENCE FACILITY
10.    Economic Ministers considered and discussed the revised governance arrangements of the Pacific Resilience Facility, and noted that the PRF is expected to be a multi-donor funded facility, with operational elements spread across multiple legal and tax jurisdictions in Pacific Island Countries.
11.    Economic Ministers further discussed the analysis by the PRF Technical Working Group, particularly the processes and additional work required to establish the PRF as an international organisation, and the proposed transitional arrangement. Ministers asked the PRFTWG and PIFS to develop a detailed proposal for governance during the transitional arrangements.
12.    Ministers:
(3) agreed to establish the Pacific Resilience Facility as an international organisation; and
(4) agreed to an interim transitional arrangement for the Pacific Resilience Facility to be ‘housed’ and executed as a programme of the PIF, pending agreement, ratification and accreditation steps for the new international organisation.

13.    Economic Ministers considered and discussed the revised financial products of the Pacific Resilience Facility, which was proposed by the PRF Technical Working Group based on Member countries’ feedback and stakeholder consultations, as follows:
a.Government concessional loans to be replaced with grants only for community level disaster risk preparedness projects (with some provisions for technical assistance);
b.A phased-approach to the development of the private sector risk sharing facility, ideally to be developed after the establishment of the PRF as an independent international organisation; and
c.Allocations to civil societies to be replaced by the community grants through national governments.
14.    Economic Ministers also considered the proposed guiding financial principles of the PRF, which are as follows:
a.the capital base of the PRF is to be preserved and grown over time; and
b.the total value of disbursements of financial products is to be no greater than the net income generated on the capital base.
15.    Ministers:
(5) agreed to provide grants only (inclusive of some provision for technical assistance) to governments for community-level disaster risk preparedness/resilience projects;
(6) agreed to a phased development of a risk sharing facility for the Private Sector resilience projects; and
(7) requested additional detailed work on conditions for disbursements, access and risk management policies of the financial products.
CAPITALISATION OF THE PACIFIC RESILIENCE FACILITY
16.    Economic Ministers discussed the critical importance of adequately capitalising the PRF. Given the resilience financing needs of the region, the initial capital base should be around US$1.5 billion – which is equivalent to approximately 1% of Regional Nominal Gross Domestic Product (NGDP) valued at around US$30 billion (based on average NGDP from 2014-2018), accumulated over five years.
17.    Economic Ministers noted the PRF should aspire to raise 3% of the regional NGDP over a period of 5 years, aligning with the average annual losses to NGDP experienced by the PICs, equivalent to US$4.5 billion.
18.    Following successful Caribbean countries and Mozambique fundraising experience, the Economic Ministers stressed the importance of the entire region working together to collectively raise ‘new money’ to capitalise the PRF.
19.    Ministers:
(8) acknowledged the need to capitalise the PRF and commit to collectively advocate for, and solicit support of development partners to raise funds for the PRF;
(9) directed PIFS, with the guidance of PRF-TWG, Economic Ministers and Forum Leaders, to work on a strategy for Global Pledging and Fund-raising event(s) for the PRF under the guidance of the FEMM Troika and PRF-TWG; and
(10) considered the funding of FICs’ US$20 million contribution to the capitalisation of the PRF from the initial regional allocation of US$200 million.
WAY FORWARD
20.    Samoa registered its interest to host the Pacific Resilience Facility once it is established as an international organisation.
21.    The outcomes and decisions of the 2019 Special FEMM will be conveyed to the Forum Leaders Meeting in Tuvalu in August 2019.
*Fiji abstained from supporting all of the recommendations in the 2019 Special FEMM Action Plan.