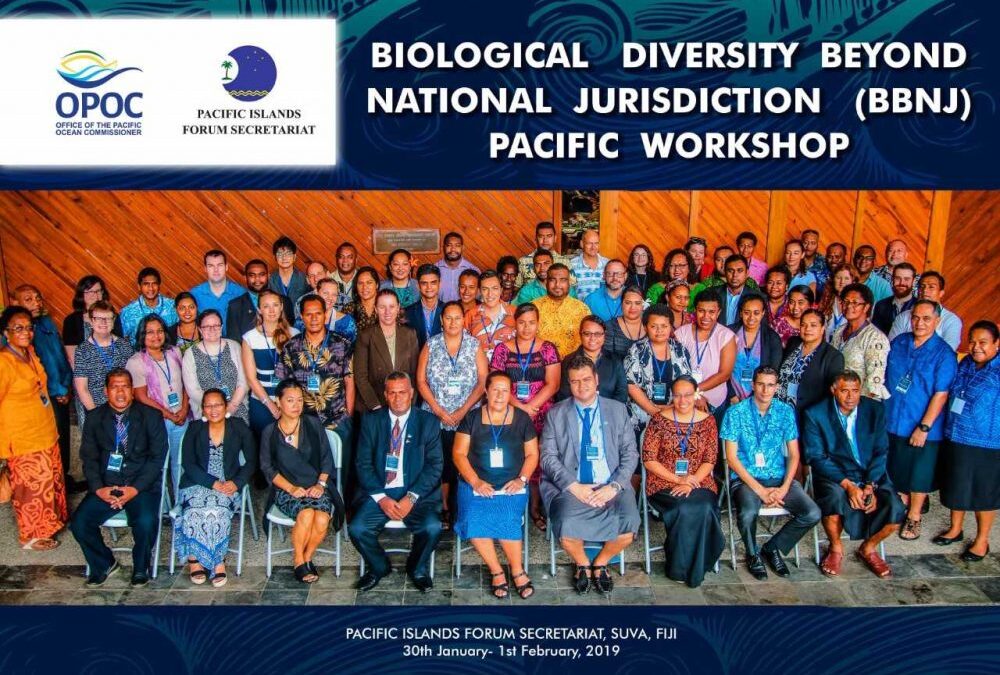 Pacific officials preparing for a major international meeting to agree an international treaty on the high seas must remember that they negotiate on behalf of the people of the Blue Pacific who greatly depend upon the ocean and its resources, says Pacific Ocean Commissioner, Dame Meg Taylor.
Opening a three-day workshop on the Conservation of Biodiversity on Areas Beyond National Jurisdiction (BBNJ), Dame Meg Taylor who is also the Secretary General of the Pacific Islands Forum told the participants that they have a vital role in progressing the vision of the Blue Pacific continent, by working together to see a legally binding treaty for the high seas in place by 2020.
“I would like to remind you all that while we are here talking about BBNJ and the high seas, we should not forget the people and communities which depend upon the ocean and its resources. Those for whom the ocean has been home for generations,” says Dame Meg Taylor.
In welcoming the participants, Dame Meg, reminded them of the Pacific Forum Leaders’ decision in 2018 on sustainable oceans management, use and conservation and particularly the BBNJ negotiations, which is one of the Forum’s four key advocacy priorities this year.
“Leaders have instructed all relevant Forum mechanisms must be used to advance the region’s positions in these negotiations and have underscored the urgent need for the region to be fully engaged in the negotiations for this new treaty on the high seas.
She commended the participants, most of whom are seasoned negotiators for being part of the information sharing sessions, saying it was important as they prepare for the upcoming second session of the Inter Governmental Conference in New York in March.
She thanked the Governments of Australia (DFAT), New Zealand (MFAT), The Government of Spain, and other partners, particularly Conservation International, PEW Charitable Trust, and Nereus for having supported the Office of the Pacific Ocean Commissioner to make the workshop possible.
The close collaboration of the regional technical team made up from SPREP, SPC, FFA and USP was also acknowledged.
“I hope that we will be able to continue to deepen these partnerships, so we can be sure that the Pacific is well prepared ahead of the negotiations,” said Dame Meg Taylor.
Fiji’s Ministry of Foreign Affairs Director of Multilateral Bureau Peter Emberson when officiating at the workshop challenged participants to thinking about how they can shape the negotiations to protect the Pacific interests.
“The region did it once before, when we all came together to support UNCLOS, the overarching instrument that guides us today and no doubt with our collective efforts, commitment and coordinated approach as a region, we can once again shape the negotiations for an international legally binding instrument on marine biodiversity beyond national jurisdiction that will ensure Pacific interests are safeguarded.

Mr Emberson was speaking on behalf of the Fiji which is currently the chair of the Pacific Islands Small Islands Developing States in New York.
The Blue Pacific region has a long history of sustainable integrated ocean management, use and conservation and has taken a global leadership role on oceans, including advocating for the standalone Sustainable Development Goal on oceans, SDG 14.
Following agreements made by Pacific Leaders at the Pacific Islands Forum meeting in 2018, Sustainable oceans management, use and conservation – particularly the BBNJ negotiations – is one of the Forum’s four key advocacy priorities for 2019.
ENDS

Note to Editors- The Pacific’s Negotiating Position and Background to BBNJ
The Pacific’s involvement in BBNJ is based on the premise that ocean governance is not complete without a strong governance regime in the high seas.
The Pacific’s key negotiating priorities includes ensuring a mechanism for the conservation and sustainable use of BBNJ.
The new instrument must create a level playing field for accessing marine genetic resources and must promote the equitable sharing of benefits.
The new instrument to contain robust and action oriented capacity building and technology transfer provisions.