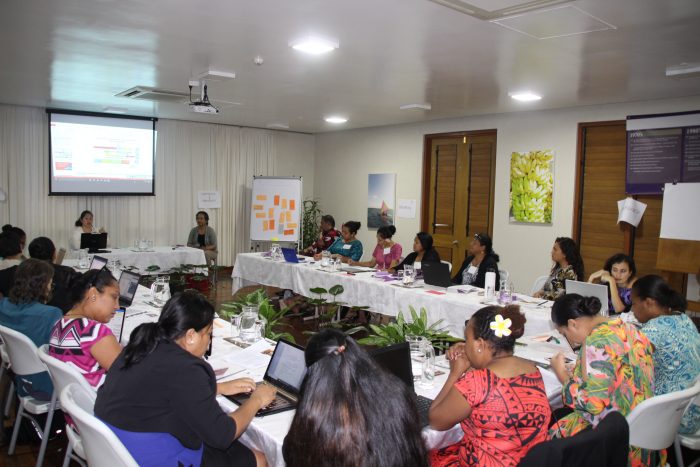 2 October 2018
Fifteen women from across the Pacific are in Suva this week to participate in a climate change negotiators workshop in preparation for their active and effective participation at the UNFCCC 24th Conference of Parties (COP24) meeting to be held in Katowice (Poland) in December.
Supported by Australia, the 3-day workshop will be hosted by the Pacific Islands Forum Secretariat and facilitated by the Women’s Environment and Development Organization (WEDO). This is the sixth workshop supported by Australia, part of an ongoing program designed to amplify Pacific women’s voices in climate diplomacy.
The Australian High Commissioner to Fiji, HE Mr John Feakes, said “Australia works closely with the Pacific to help the region’s voice be heard in international climate change negotiations.  Women bring a valuable perspective to these discussions, and this training program has a strong record of success in supporting women negotiators with this important work.”
The workshop is a response to growing evidence of issues stemming from intersections between gender equality and a rapidly changing climate, and addresses the critical role women negotiators can play in addressing them.
One participant from the earlier workshop noted, “Women in the Pacific need to come out stronger and have their voices heard. Trainings like this is very important in that regard. It helps women to be able to participate in the drafting of the texts so that their perspectives and experiences can be captured, but also to be able to negotiate the texts themselves. It’s a useful training to have to develop our understanding of climate change negotiations.”
During the past several years of international climate change negotiations, nations have established the need to promote gender equality and protect women’s human rights for effective action on climate change.  This has occurred in parallel to global milestones like the endorsement of the 2030 Agenda and 17 sustainable development goals.
“Women bring unique perspectives to the negotiating table and the Forum Secretariat is proud and committed to its association with this capacity-building support programme for Pacific women climate change negotiators. The Pacific Islands Forum is steadfast in supporting inclusivity, equity and equality for all people of the Pacific. It is a core value of the Framework of Pacific Regionalism.”
WEDO, who will facilitate the training, have been supporting the leadership of women in the UN climate negotiations for nearly a decade now via a program entitled the Women Delegates Fund. The Fund provides both direct travel support to women to attend the climate change meetings such as COP24, as well as capacity building opportunities such as this workshop.
“Women’s equal participation in climate change decision-making is fundamental to just policies that reflect and respond to the needs of the global community. Investing in women’s participation and leadership in the UN climate negotiations is the first step,” Bridget Burns, WEDO Co-Director said.
Australia and WEDO will support participants to attend the UNFCCC COP24 negotiations in Katowice, Poland.