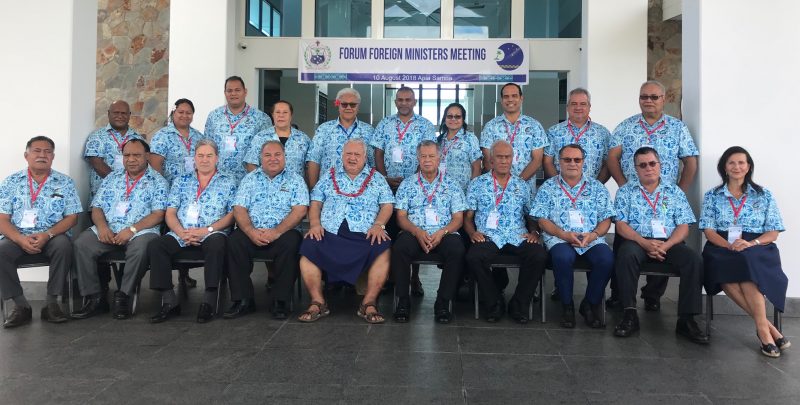 The 2018 Pacific Islands Forum Foreign Ministers Meeting was held in Apia, Samoa on 10 August 2018. The Meeting was chaired by the Honourable Prime Minister of Samoa, and was attended by the President of Nauru, the Prime Minister of the Cook Islands, the Prime Minister of Tonga, the Deputy Prime Minister of New Zealand, the Deputy Prime Minister of Samoa, and the Vice-President of New Caledonia. The meeting was also attended by Ministers from Australia, Fiji, French Polynesia, Palau, Papua New Guinea, Republic of the Marshall Islands, Samoa, Tuvalu and Vanuatu. The Federated States of Micronesia, Kiribati and the Solomon Islands were represented by officials. The Ulu o Tokelau represented Tokelau, as Associate Member.
2.        The meeting was also attended by heads of the Pacific Islands Forum Fisheries Agency (FFA), the Pacific Community (SPC), the Secretariat of the Pacific Regional Environment Programme (SPREP), and the University of the South Pacific (USP).
3.        Ministers expressed their appreciation to the Government of Samoa for the excellent arrangements for the meeting and the warm hospitality accorded to delegations.

Building a Strong Pacific: Our People, Our Islands, Our Will

4.        Forum Foreign Ministers welcomed the theme proposed by the incoming Chair, Nauru, for the upcoming meeting of Pacific Islands Forum Leaders – ‘Building a Strong Pacific: Our People, Our Islands, Our Will’- recognising its call on the Pacific Islands Forum to strengthen our collective will to overcome our persistent development challenges and drive our own ambitions. Ministers recognised the theme as building on the Blue Pacific narrative which Forum Leaders had endorsed in 2017, and which has served to bring a revitalised commitment to regional identity and action.
5.        Foreign Ministers recognised the timeliness and relevance of the theme in the current geopolitical environment. With shifts in the global geopolitical landscape bringing increasing strategic uncertainty, competition and cooperation in the Pacific, Ministers recognised both opportunities and challenges for the Pacific.
6.        Foreign Ministers emphasised the need for the Pacific to act now, and to act collectively, to drive the Pacific’s own political and development ambitions. Foreign Ministers reflected on strategic opportunities for building a stronger Blue Pacific and also discussed priority areas for regional action.
7.        Foreign Ministers committed to the Blue Pacific as a crucial narrative to the 2018 theme, ‘Building a Strong Pacific: Our Islands, Our People, Our Will’, enabling the Pacific Islands Forum to work together to advocate, engage and address our collective challenges, interests and opportunities that deliver on our regionalism priorities and ambitions under the Framework for Pacific Regionalism.

8.        Foreign Ministers discussed the importance of effective international engagement and advocacy by the Pacific Islands Forum, and recalled their commitment in 2017 to strengthening collective diplomacy to advance the Leaders’ priorities and vision for the Pacific region.
9.        Foreign Ministers stressed the importance of CROP and other agencies working together cohesively and collaboratively to effectively support Forum Members in their collective advocacy in international fora to progress the priorities of the Framework for Pacific Regionalism.
10.      Foreign Ministers:
(i)      Endorsed the Strategy for PIF International Engagement and Advocacy;
(ii)      Approved the following priorities for strengthened, strategic international advocacy and engagement in 2019: International action on climate change and strengthening Pacific resilience; Strengthening sustainable ocean management, use and conservation; Strengthening and promoting regional security; and Promoting Pacific progress on, and approaches to, the 2030 Agenda, including the S.A.M.O.A. Pathway;
(iii)     Endorsed negotiating priorities and an engagement plan to support collective Forum advocacy and engagement at the 24th Conference of the Parties (COP 24) with regards to the Paris Agreement Work Programme, Talanoa Dialogues and Pre-2020 implementation and action; and
(iv)      Endorsed the need for high level, consistent and sustained representation from Forum member countries in the lead up to, and at COP 24, to support the achievement of Pacific negotiation priorities.

11.       Forum Foreign Ministers recalled their recommendation to Forum Leaders in 2017 to call for comprehensive consultations to develop a new regional security declaration for Leaders’ consideration in 2018.  Ministers welcomed the extensive consultations that had been undertaken by the Pacific Islands Forum Secretariat since that time to hear from a wide range of stakeholders their concerns about the regional security environment, and their expectations and ambitions for regional action on security issues.
12.      Forum Foreign Ministers discussed the importance of the expanded concept of security, and the wide range of security threats to the region, including the impacts of climate change which exacerbate the damage and risks caused by nuclear waste in the Pacific. Ministers also discussed the importance of enhanced regional security cooperation.
13.      Forum Foreign Ministers considered a revised draft declaration and recommended it for Leaders’ consideration and endorsement in Nauru. Ministers emphasized the importance of an effective action plan to guide the implementation of the declaration.

14.      Forum Foreign Ministers discussed the importance of securing maritime boundaries for the development and security of our region. Ministers considered the benefits of setting maritime boundaries under the UN Convention on the Law of the Sea, including the capacity to maximise rights over our countries’ critical resources, such as fisheries, and to promote regional security.
15.      Forum Foreign Ministers:
(i)       Welcomed the strong demonstration of cooperation in the region which has enabled significant progress in setting shared boundaries within the region
(ii)      Acknowledged with appreciation the support of SPC, FFA and Australia and other relevant agencies which have provided continued legal and technical advice and assistance under the Pacific Regional Maritime Boundaries Project;
(iii)     Encouraged Members to prioritise action to finalise bilateral treaty negotiations and processes;
(iv)     Noting that some outstanding maritime boundaries are with Forum Dialogue Partners,
encouraged those Forum Dialogue Partners to progress negotiations with Members;
(v)      Recognised the potential for declaration of the 200 nautical mile outer limits of Exclusive
Economic Zones (EEZs), to realise in a practical way Leaders’ vision of the region as the ‘Blue Continent’;
(vi)     Encouraged Members to consider prioritising the declaration of the outer limits of their
respective EEZs; and
(vii)     Recommended that Forum Members work together, with the support of CROP agencies, to develop expertise and proposals on the complex technical, legal and policy issues raised by the prospect of climate change impacts on the baselines of coastal states, including the option of referral to the UN International Law Commission as a matter of urgency.

Aerial surveillance programme in the Pacific

16.      Forum Foreign Ministers:
(i)      Agreed to the resolution proposed by Forum Fisheries Ministers “that all countries
utilising the FFA managed Pacific Maritime Security Programme air surveillance aircraft
programme will provide uniform treatment to these aircraft, with their crews and support
systems to be treated as ‘State’ aircraft thereby utilising diplomatic entry clearance
protocols and such waiver of government fees and charges as available to regular State
aircraft”;
(ii)     Noted the need for designation of a National Air Tasking Authority in each participating
country to ensure coordination across relevant national agencies;
(iii)     Noted that should blanket approval be granted for ‘State’ treatment, a Memorandum of
Understanding will be concluded between the FFA and each participating Pacific Island
member detailing operating processes consistent with the national laws and procedures of that member; and
(iv)      Agreed that this matter should be referred to Forum Leaders for their consideration.

17.      Forum Foreign Ministers commended to Leaders the application by Wallis and Futuna for associate membership to the Pacific Islands Forum.

18.      Forum Foreign Ministers noted:
(i)       Palau’s invitation to Leaders to participate in the Our Oceans Conference in 2020, and request for Leaders’ support in advocating for partnerships, funding and technical support;
(ii)      The update provided by Nauru on the preparations for the upcoming Pacific Islands
Forum Leaders’ Meeting;
(iii)     The initiative of Papua New Guinea, as chair of APEC 2018, to arrange an informal
dialogue between Pacific Islands Leaders and APEC Leaders in the margins of the APEC
Summit, noting that Australia and New Zealand will be invited as APEC Members;
(iv)     The report from New Caledonia on preparations for their national Referendum,
expected to be held on 4 November 2018; welcomed the impending invitation for the
Pacific Islands Forum to observe the referendum; and recommended that New Caledonia
also brief Leaders at the upcoming Forum meeting in Nauru;
(v)       Vanuatu’s offer to host the Pacific Islands Forum and Related Meetings in 2020;
(vi)     Vanuatu’s intention to seek a seat on the UN Special Committee on Decolonisation (C24) and its request for support;
(vii)     Vanuatu’s intention to table a resolution in the UN General Assembly in 2019 seeking reinscription of Papua (West Papua) on the UN C24 List of Non-Self Governing Territories, which was met with demur by Papua New Guinea, Australia and Fiji, whilst other countries did not make a comment;
(viii)    The presentation by the Republic of the Marshall Islands on the Climate Vulnerable Forum (CVF) Virtual Summit, which will take place on 22 November 2018, noting the innovative nature of this first virtual leaders’ summit, and the last leadership level Talanoa Dialogue event before UNFCCC COP24 at Katowice, Poland; the request that CROP agencies provide technical support; and the proposal that this also be brought to the attention of Leaders in Nauru;
(ix)     The candidacy by the Republic of the Marshall Islands for a seat on the UN Human Rights Council for 2020-22, and its request for support;
(x)      The invitation by the Republic of the Marshall Islands for Members to consider and sign the ‘UN Secretary General’s 2019 Climate Summit and Raising Ambition by 2020: A Declaration for Ambition’;
(xi)     The proposal from Samoa to table the “Digital Pacific” initiative for consideration by the Leaders in Nauru, 2018;
(xii)        Australia’s intention to use its hosting of the 2020 Asian Ministerial Conference on Disaster Risk Reduction, as an opportunity to promote the interests and needs of Pacific countries;
(xiii)      Dr Colin Tukuitonga’s candidacy to become the Regional Director for the Western Pacific Region of the World Health Organisation, which if successful, would place a Pacific Islander in this role for the first time;
(xiv)       The proposal by New Zealand for a regional dialogue on climate-induced displacement and migration issues to be held on the margins of the 2019 Pacific Islands Forum;
(xv)        New Zealand’s encouragement to all Forum Members to attend the Wilton Park event, being co-hosted by New Zealand and the United Kingdom in December 2018 to raise global awareness of the impacts of climate change in the Pacific; and
(xvi)       New Zealand’s desire to support Forum Island countries in exploring options for addressing human rights abuses in the region’s tuna industry.
19.      Forum Foreign Ministers also conveyed their deep appreciation for the service to the region of Mr James Movick, Director General of the FFA, Mr Colin Tukuitonga, Director General of the Pacific Community, and Professor Rajesh Chandra, Vice Chancellor of the University of the South Pacific.  Ministers also conveyed their congratulations to Dr Manumatavai Tupou-Roosen for her appointment as Director-General of the FFA.