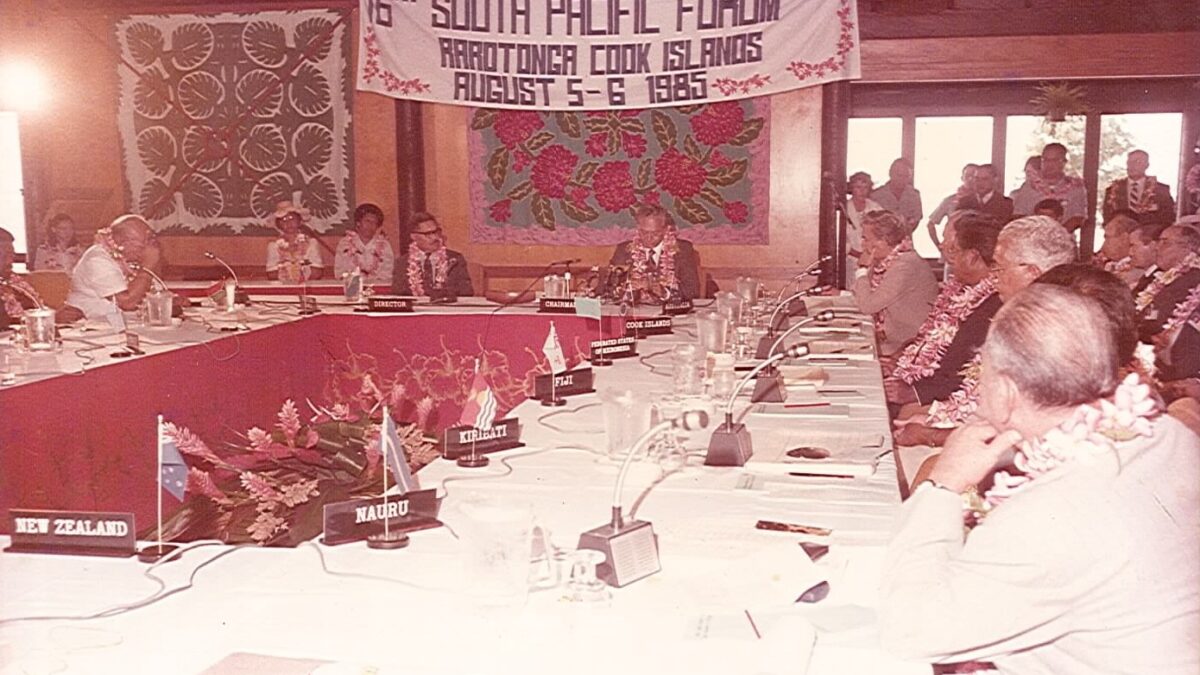 Today marks the 33rd anniversary of a significant event in the history of the Pacific Islands Forum – the signing of the South Pacific Nuclear Free Zone Treaty.
In declaring the world’s second nuclear weapons free zone in a permanently inhabited area, the Blue Pacific region stood united at the front of the international debate on nuclear disarmament.

In 1985, the Forum already had a long history of opposition to nuclear activity in the region. A deep regret for atmospheric nuclear testing is recorded in the Leaders Communique from the 1st Forum in 1971. A South Pacific Nuclear Free Zone had been first proposed in 1975.
Despite this consistent stance, nuclear testing and proposals for storage and dumping of nuclear waste in the Pacific continued.
Forum Leaders engaged in a lengthy debate about nuclear activity in the region during the 14th South Pacific Forum in 1983 in Canberra. Following the discussion, the Forum adopted a statement in which Forum Leaders:
“expressed their commitment to advancing the cause of general disarmament; supporting the negotiation and conclusion of an effective Treaty which would outlaw all forms of nuclear testing by all States in all environments; and preventing the spread of nuclear weapons and nuclear explosive devices particularly through support for the Treaty on the Non-Proliferation of Nuclear Weapons.”
“The Forum decided to place the question on the Agenda of its 1984 Session to provide further opportunity for consideration and examination of the concept of a nuclear free zone.”

In 1984, Forum Leaders meeting in Tuvalu felt there had been disappointing progress in international disarmament negotiations, and that collectively they could contribute towards maintaining momentum on nuclear disarmament and arms control. They subsequently “agreed on the desirability of establishing a Nuclear Free Zone in the region at the earliest possible opportunity.”
Forum Leaders agreed to do so in accordance with a list of principles including:
“that South Pacific countries should be free to live in peace and independence and to run their own affairs in accordance with the wishes and traditions of their people; and that South Pacific countries should enjoy peaceful social and economic development free from the threat of environmental pollution.”
Over the next 12 months a Working Group on a Nuclear Free Zone in the Region convened and prepared a report that was tabled for Leaders at the 16th Forum in Raratonga, Cook Islands. The report proposed text for the Treaty and that text was subsequently endorsed and opened for signing.

The Treaty Is Signed

On 6th August 1985 Australia, Cook Islands, Fiji, Kiribati, New Zealand, Niue, Tuvalu, and Western Samoa were the first signatories to the Treaty.  The Treaty was later signed by Nauru, Papua New Guinea, Solomon Islands, Tonga, and Vanuatu. It entered into force on the 11th December 1986.
There are Protocols to the Treaty which have been signed by China, France, Russia, the United Kingdom, and the United States of America, as the five nuclear weapon states recognised by the Treaty on the Non-Proliferation of Nuclear Weapons. The Forum continues to encourage the USA to ratify the Protocols.
In 1996 Forum Leaders acknowledged the permanent cessation of nuclear testing by France which marked the end of all nuclear testing in the region.

The Forum continues to bring its political voice to support the government and people of the Republic of the Marshall Islands in seeking a just resolution to the ongoing impacts of nuclear testing.  In 2018, this advocacy has included written representations by the Prime Minister of Samoa, as Forum Chair, to the President of the USA, and the Secretary General’s participation in the National Remembrance Day in Majuro on 1 March.
The Council of Regional Agencies in the Pacific is also working with the Marshall Islands to identify ways that CROP can provide additional assistance in addressing its nuclear legacy.

The Power of Regional Solidarity

The South Pacific Nuclear Free Zone Treaty stands as a testament to the power of regional solidarity. It was created in the belief that collective regional action can make a meaningful contribution to global issues. A belief that still holds true today.