Celebrating Kiribati Independence Day with President, His Excellency Taneti Maamau, First Lady Maamau, Members of the Cabinet and the people of Kiribati was for me, an affirmation of the wealth we have in our social capital, as proud peoples of this ocean of islands. I had the honour of being invited to celebrate with the iKiribati people, their 39th National Day on 12 – 14 July, 2018. 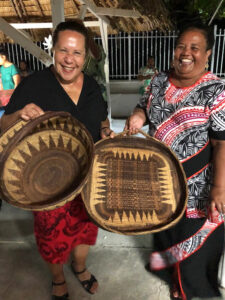 I was greeted by an economy and a people that has evolved significantly from that which met me on my first visit to this island nation in 2015. The strong sense of community and ownership by the people of their development aspirations and their reality was a strong recurring message throughout the celebrations – an instrumental shift in the people’s awareness of their national aspirations and their continuing efforts towards realising their development ambitions.
As a nation of atolls at the forefront of the effects of climate change, it was inspiring to witness the spirit of resilience of this ocean people who knew their space and were sure of their place in today’s world. This was a people who were truly in charge of their development trajectory.
The celebrations brought together iKiribati peoples, proud of their heritage as stewards of this ocean. There is a collective calm and confidence in who they are as a nation and as individuals; there is a sense of ownership of the fact that they live here, they belong here and that they’ve got to make a life here.
The narrative has changed from being of a people who are vulnerable to climatic impacts to a people who are proud of their home and destiny, and who will continue to live and invest in their atoll nation, rich in ocean resources but most importantly, in their own people.

This is testament to the strong leadership of this island nation. An era of leadership which has steeped its foundation in the cultural values of its people – recognizing the legacy of past Governments, embracing the present and its challenges and inspiring a strategic approach to preparing for the future through maximizing the returns from its natural, human and cultural capital.
Kiribati has a 20-year national strategic vision referred to as KV20 with the theme: Enabling Transformative Development for a Wealthier, Healthier and Peaceful Kiribati. The KV20 is guided towards transformative development by four pillars including wealth, peace & security, infrastructure and governance. The KV20 and the Kiribati Climate Change policy ascertains that it is the wish of the Government of Kiribati and its people “that we will not give up our homeland, our heritage and our pride”.
I must also acknowledge the strong women in leadership positions, in both the Government of Kiribati and the various communities they represent.
I congratulate His Excellency President Maamau and reiterate my appreciation for the opportunity to celebrate this rich and enduring culture, understand the narrative and vision of the Government and the people of Kiribati and share ideas on the future.
The generosity of spirit of the people I met, and the sincere warmth with which I was welcomed, is a precious gift I left Tarawa with.
(H.E Maamau gifted us with a reading of his poem “My frigate bird” which he first read during the General Debate of the 71st United Nations General Assembly in 2016. Listen to it here.)