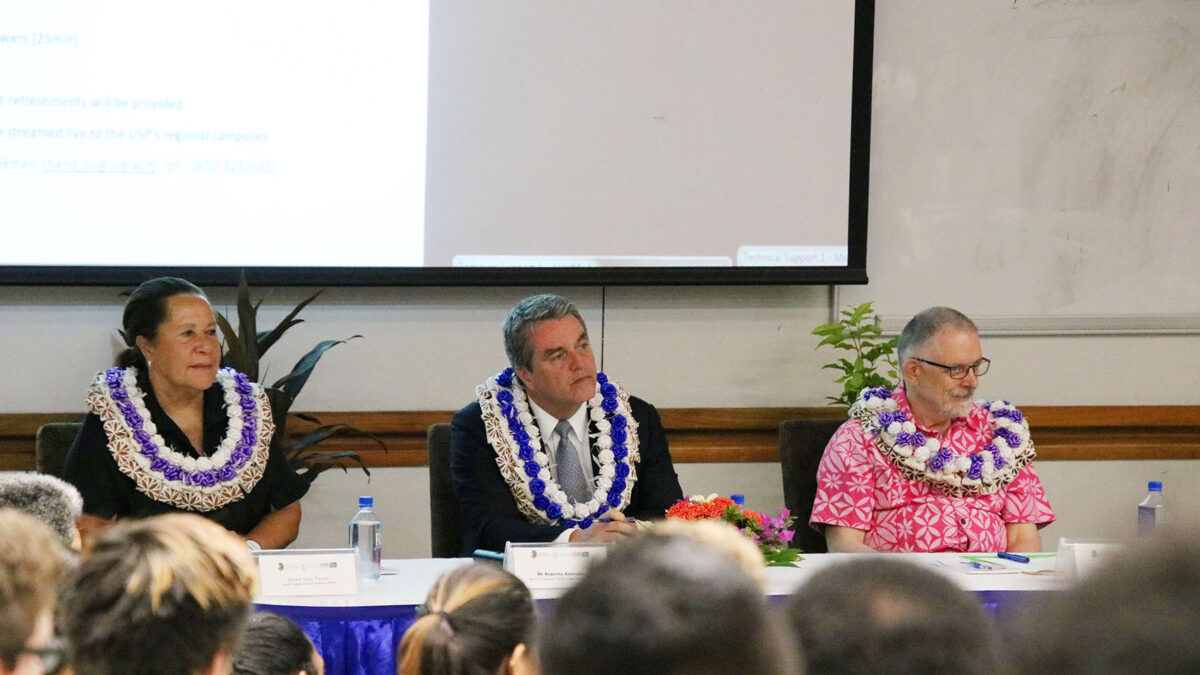 May I join the Deputy Vice Chancellor in welcoming you this evening, and in particular, let me welcome the Director General of the World Trade Organisation to the Pacific – it is wonderful to have you here with us.
I thank the University for this opportunity to say a few words on the history of regional trade this evening.
Let me to take you back to the establishment of the South Pacific Bureau for Economic Co-operation, today known as the Pacific Islands Forum Secretariat.
Founded in 1971, SPEC was established to facilitate continuing cooperation and consultation between members on trade, economic development, transport, tourism and other related matters.
From its foundation, the Pacific Islands Forum has long recognised the benefit of working together, and the advantages of closer cooperation and coordination. Pacific Leaders have committed to harnessing our collective strength to work together to address our common challenges.
With this in mind Forum Leaders in 2017 reaffirmed the Framework for Pacific Regionalism as their platform for a renewed commitment to collective action. In addition, Leaders also recognised the Blue Pacific identity as the core driver for regional and collective action.
Since the inception of the Pacific Islands Forum regional trade has been an area where we have been able to demonstrate an ability to work together as one Pacific.
In the 1970s and the 1980s, we sought to establish the foundations for intra-regional trade, as well as trade with world. And so it was during this period that we entered into foundational agreements such as:

As we know, the 1990s saw rapid advances in globalisation, coupled with progress in ICT lay the foundation for an increasingly liberalised world economy. The entry into force of the World Trade Organisation agreements in 1995 saw the reduction of barriers to trade in goods, services and investment which led to significant increases in global trade.
In the Pacific, the trade agenda during this time focused on regional economic integration, and increasing our linkages with the global economy. During this period, we sought to engage in multilateral processes with a view to ensuring that our regional interests were taken on board in global negotiations.
As we entered the new millennium, Pacific Island Countries concluded the Pacific Island Countries Trade Agreement (PICTA) – a Free Trade Agreement amongst the 14 Forum Island Countries, which would assist their gradual integration into global trade. Fiji and Samoa continue to successfully trade under PICTA.
Trade relations and negotiations between the Pacific and the European Union then dominated a significant portion of the first decade in the 2000s with the negotiation of the Pacific – EU Economic Partnership Agreement. The Pacific ACP States concluded the negotiation of their Interim EPA in 2007. These were the most challenging and prolonged trade negotiations undertaken by the Pacific region to date – and negotiations on a comprehensive EPA were suspended in 2016.
As a result, the interim EPA agreement remains the only legally binding trade agreement between the Pacific and the European Union that interested Pacific States may accede to. To date, Papua New Guinea, Fiji and Samoa have signed on as parties to the interim EPA.
Alongside the EPA negotiations, Forum Island Countries have also negotiated the PACER Plus arrangement with Australia and New Zealand, which were launched in 2009. While PACER Plus is another example of the region’s collective effort to work towards greater economic integration, the Agreement also demonstrates the profoundly political nature of trade. The agreement, as concluded, is now for Members’ own considerations with regards to ratification.
Trade is a globalising agenda based on the principle of interdependency. On the multilateral front, the World Trade Organisation has progressed a more liberalised trade environment. In recognition of this process, our Leaders agreed to establish a regional representative office in Geneva to enable the Pacific island countries to have a voice in the WTO to defend their trade interests.
Since the establishment of the WTO in 1995, six Pacific Island countries have become full members – namely Fiji, Papua New Guinea, Samoa, Solomon Islands, Tonga and Vanuatu.
As a region, we know we can achieve more if we work together – a principle which Leaders have reaffirmed in endorsing the Framework for Pacific Regionalism.
And throughout our history, the Pacific Islands Forum has long understood the importance of having arrangements in place that would ensure that we as a region can engage in trade – whether within our own region, or with the world – in ways that benefit our membership and our people.
And why shouldn’t we? After all, we lay claim to much for which the world desires, above, within, and below our great Pacific Ocean. And so the onus is on us to support the Pacific Islands Forum to leverage these resources, as the basis for negotiations regarding global trade and economic integration.
On that note, let me again offer you a warm welcome, Director General, to the Pacific region, and I welcome your perspectives on how the WTO can help the Pacific benefit from this multilateral arrangement.
I thank you.