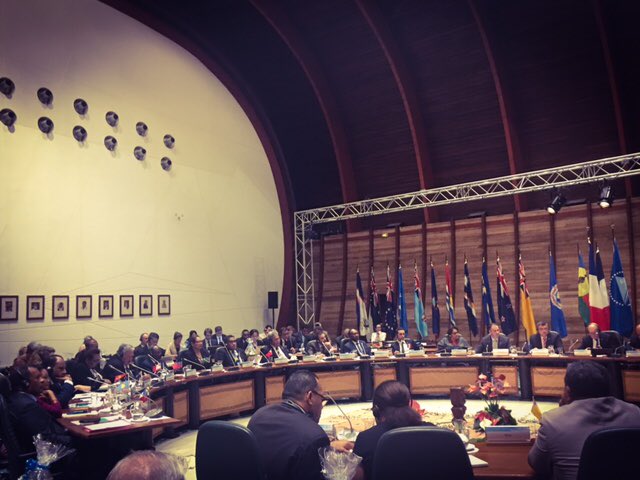 Pacific Leaders underlined their common identity as the ‘Blue Pacific’ during their meeting with French President Emmanuel Macron in New Caledonia last weekend.
Hon. Tuilaepa Sailele Malielegaoi, Prime Minister of Samoa and Forum Chair highlighted key regional development frameworks, which he said, reflected the value the Forum placed on working collectively to strengthen Pacific resilience, and for the protection and promotion of the development and security of the Pacific Ocean.
The Hon. Tuilaepa underlined the importance of collective action and a collective voice as the region pursues its development issues.
“It is important for Small Island Developing States to be able to address loss and damage associated with the adverse impacts of climate change, that is, comprehensive risk management; approaches to address slow onset events; and approaches to recovery, rehabilitation and addressing permanent loss. Climate finance in whatever form means investment in our collective future.
“The Ministers of Finance of the Pacific Islands Forum met recently to discuss a Financial Facility to address resilience in our region and how we prepare ourselves for climatic impact, as we cannot wait for help after the fact of a cyclone tsunami or floods. The Donor Roundtable that followed discussed how they could support a well-prepared Pacific. In this regard, we would invite the Government of France to consider this proposal from our region.”
Hon. Tuilaepa discussed the 2017 endorsement by Forum Leaders of The Blue Pacific identity at their 48th meeting in Apia (Samoa); the role Pacific Island Countries played in the conclusion of the Paris Agreement in 2015; the 2016 endorsement of the Framework for Resilient Development in the Pacific (FRDP), with its coordination mechanism i.e. the Pacific Resilience Partnership; and the regional unity to influence the outcomes of the inaugural United Nations Oceans Conference, which was co-chaired by Fiji and Sweden, in June 2017.
France is a Pacific Islands Forum Dialogue Partner. Dame Meg Taylor, the Pacific Islands Forum Secretary General, also met with President Macron during which she acknowledged France’s commitment to its intentions to strengthen engagement in the region, in particular in the areas of climate finance, effective partnerships and the Blue Pacific.
Dame Meg also met Hon. Jean-Yves Le Drian, the French Minister for Foreign Affairs. Discussions focused on the forthcoming referendum in New Caledonia, the integration of French Territories in the Pacific into the Pacific Islands Forum, and the Forum Leaders’ priorities on resilience and oceans.
Read Prime Minister Tuilaepa’s full remarks here.