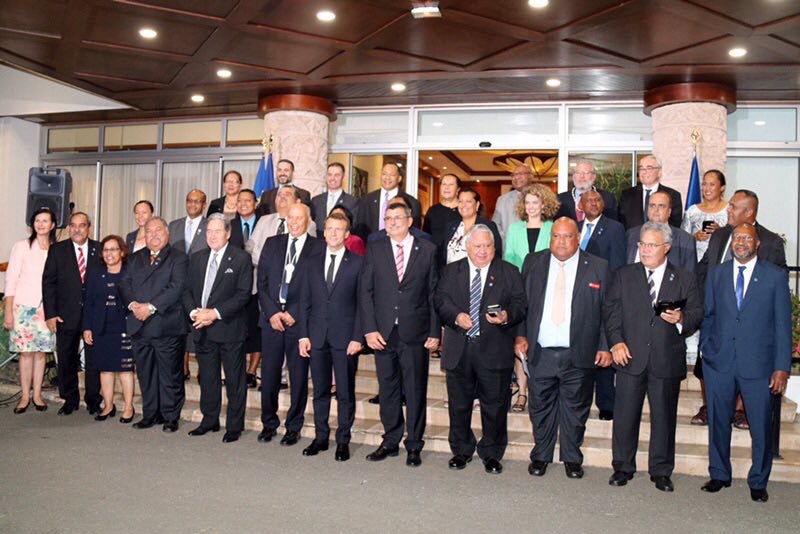 President Macron
Excellencies, Ladies and Gentlemen:
I would like to acknowledge with appreciation this opportunity provided for Heads of State and Government of the Pacific to meet with you to discuss the issues considered of high priority for the Pacific region. I note that the focus during the afternoon session with your Foreign Minister was on issues related to climate change, biodiversity and the Ocean, as they affect our region.
Leaders at its 48th session of the Forum Leaders meeting, endorsed The Blue Pacific identity as the core driver of collective action for advancing the Leaders vision under the Framework for Pacific Regionalism. Through this endorsement, Leaders recognised The Blue Pacific as a new narrative that calls for inspired leadership and a long-term Forum foreign policy commitment to act as one “Blue Continent”.
In considering the shifts in the global and regional contexts, Leaders also recognised the opportunity of The Blue Pacific identity to reinforce the potential of our shared stewardship of the Pacific Ocean and reaffirm the connections of Pacific peoples with their natural resources, environment, culture and livelihoods. It aims to harness our shared ocean identity, geography and resources to drive positive socio-cultural, political and economic development. Therefore securing the wellbeing and potential of the Blue Pacific is at the centre of the Forum agenda.
Leaders further recognised The Blue Pacific as being about all Pacific peoples comprising our ocean of islands, who recognise their needs and potential, who plan and own their development agenda, and who can act collectively for the good of all, rather than a few. The Blue Pacific is the catalyst for deeper Pacific regionalism.
Pacific leaders are committed to maintaining a strong and collective voice and action on issues vital to our Blue Pacific continent such as we have done for current ocean governance arrangements, establishing a ban on driftnet fishing, lobbying for a stand alone SDG Goal 14 on Oceans and reaching global consensus for the Paris Agreement.
In 2015, the Pacific Island Countries were instrumental in concluding one of the toughest ever global negotiations for the Paris Agreement. Collectively and in the spirit of the Blue Pacific identity, the Pacific Leaders and their delegations doggedly pursued our region’s priorities until we were able to make the world see climate change through our eyes, as the most vulnerable communities to climate change impacts.
Reflecting the region’s commitment to the Paris Agreement, Pacific Islands Forum Leaders in 2016 endorsed the Framework for Resilient Development in the Pacific(FRDP). It is a global first where the Pacific region seeks to prevent and reduce its exposure to risk from climate change and natural hazards risk; achieve low carbon development; and, improve disaster preparedness, response, recovery and reconstruction. The FRDP outlines an implementation framework with a coordination mechanism; the Pacific Resilience Partnership.
In June 2017, the Pacific Leaders again rallied to support and influence the outcomes of the inaugural United Nations Oceans Conference, which was co-chaired by Fiji and Sweden.
Similarly, Leaders also committed their support to Fiji’s Presidency of the 23rd Conference of the Parties of the UNFCCC, held in November in Bonn, Germany. A key focus was on the close links between Ocean and Climate and the need for Oceans to become an integral part of the continuing climate change agenda. Pacific Leaders thence, launched the Oceans Pathway at COP 23 that seeks to address and strengthen actions related to the ocean–climate nexus.
It is also important for Small Island Developing States to be able to address loss and damage associated with the adverse impacts of climate change, that is, comprehensive risk management; approaches to address slow onset events; and approaches to recovery, rehabilitation and addressing permanent loss.  Climate finance in whatever form means  investment in our collective future.
The Ministers of Finance of the Pacific Islands Forum met recently to discuss a Financial Facility to address resilience in our region and how we prepare ourselves for climatic impact, as we cannot wait for help after the fact of a cyclone tsunami or floods. The Donor Roundtable that followed discussed how they can support a well prepared Pacific. In this regard we would invite the Government of France to consider this proposal from our region.
Mr President, the examples as highlighted reflect the value the Forum has placed on the international rules based order for protecting and promoting the development and security of the Pacific Ocean and the importance of collective action, a collective voice in pursuing our issues.
Mr President, the collective positioning under the Blue Pacific identity is an approach that we would also encourage for the ACP Group  for the post Cotonou negotiations because, numbers aside from common interests, strengthens  solidarity and ensures the ACP Group is fit for purpose. It is also our request that that in the course of negotiations let us focus on non partisan and interventionist approaches on global goods.
Building on the strengths of collective collaboration of the Blue Pacific identity that we have embraced will ensure that our smallness will have an expanded outreach, and our collective voice will soar above the roar of the angry tides. The recognition of our  “earth without borders” resonates with the need for a global outlook, international cooperation and solidarity, and a shared strategy, to address the challenges we face.