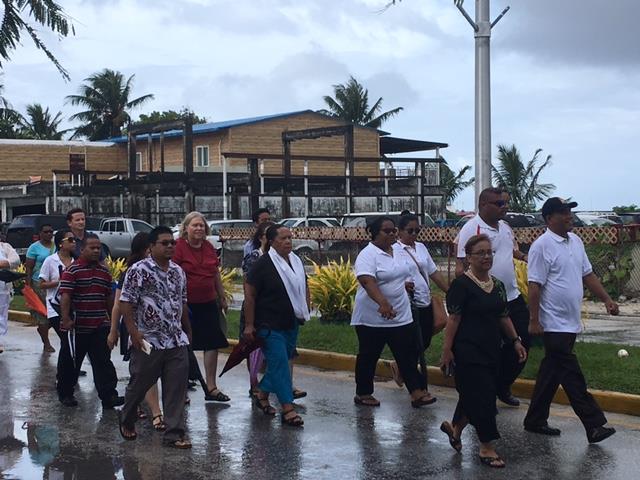 Secretary General Dame Meg Taylor joined Republic of Marshall Islands President Hon. Hilda Heine this morning for a march in commemoration of Nuclear Victims Remembrance Day.
Later in the day Dame Meg spoke at the opening ceremony saying, “I am deeply honored to have been invited to attend this year’s commemoration of Nuclear Victims’ Remembrance Day.
At the outset, I would like to pay my personal respects to the victims and survivors of the nuclear testing conducted in the Marshall Islands in the 1940s and 50s.
It is my privilege to also convey to you the deep and constant support of the Leaders of the Pacific Islands Forum to the government and the people of the Republic of the Marshall Islands.
Leaders of the Pacific Islands Forum have been long-standing advocates for the people of the Marshall Islands in your quest to obtain fair compensation from the United States of America for the ongoing damage caused by nuclear testing. This support was most recently reaffirmed by Forum Leaders when they met last year in Samoa.
While serving as Forum Chair last year, the President of the Federated States of Micronesia, HE Peter Christian, wrote to the new President of the United States of America, HE Donald Trump. And I will take the liberty of reading directly from that letter:
“The Leaders of the Pacific Islands Forum urge you and your Administration to give serious consideration to revisiting and reassessing your Administration’s position on the issues linked to the testing program which have been identified by the Marshall Islands’ Government. This includes continuing need for healthcare for those populations who were adversely affected by the testing program, and full payment of all personal injury and private property claims, as outlined in the Marshall Islands’ petition to the U.S. Congress with respect to “Changed Circumstances”.
As we advocated at the 10th Pacific Islands Leaders Conference held on 31 August 2016 in Honolulu, Hawaii, we also encourage the United States to work with the United Nations on this issue.
As friends of the United States and the Republic of the Marshall Islands, the Pacific Islands Forum urge the United States Government to address this issue.”
I understand that this letter still remains without a response. As do a succession of other Forum representations to former Presidents of the United States. But this does not discourage the Forum from maintaining its united and strong voice in support of the Marshall Islands. Indeed I expect that the current Forum Chair, the Prime Minister of Samoa, will very shortly make a formal representation to the US.
In 2017, the Forum also raised the issue directly with the new Secretary General of the United Nations. The UN Secretary General clearly recognised that the impact of the nuclear testing is long-lasting and must be addressed. And he also said that UN agencies – and I quote – “stand ready to respond to requests for assistance from the Government of the Marshall Islands so that the Marshallese people can fully overcome the legacy of nuclear testing and live safely and in an environment of peace and sustainability” – end quote. This is, I believe, a significant acknowledgement and offer from the UN Secretary General – and I encourage you as a country to make the most of it.
I would also like to let you know that the regional organisations of the Pacific are committed to assisting as we can. Your regional organisations: The Pacific Islands Forum Secretariat, and Pacific-Community-SPC and Pacific Environment Information Network [PEIN] have started a dialogue with the newly established National Nuclear Commission to ascertain how we can jointly assist the Marshall Islands in dealing with various consequences of nuclear testing. We are committed to continuing this dialogue and learning from the Commission how we might best support specific priority areas.
Honourable Leaders, Distinguished Guests, the terrible events of 1 March 1954 will of course not be forgotten by the people of the Marshall Islands. And as Secretary General of the Pacific Islands Forum, I am committed to ensuring that these events are also not forgotten by our wider Pacific family. And I think it is particularly important to pass on these memories and awareness to our young people, who thankfully have only known a nuclear free Pacific. May this always be the case.”