In his writings about the incredible blue continent that we live in, the great Pacific philosopher and poet Epeli Hau’ofa described our part of the Pacific in these words – “Oceania is vast, Oceania is expanding, Oceania is hospitable and generous, Oceania is humanity rising from the depths of brine and regions of fire deeper still, Oceania is us. We are the sea, we are the ocean, we must wake up to this ancient truth.”
These words are as relevant a description today as they encapsulate the inextricable link and immense responsibility that we as stewards of the Pacific Ocean have and the implications that the ocean has on us, as it unites and divides us, connects and separates us, offers us livelihoods and opportunities, and today could threaten our very survival due to the effects of climate change on the ocean.
Traditional forms of this stewardship vary across the Forum Family of nations that are scattered across the vast Blue Pacific, since time immemorial. For example some of our coastal peoples are known to declare taboo areas for a year when a chief of theirs dies.
More recent incarnations include a network of locally-managed marine areas (LMMAs) across the region which seek to empower local communities to embrace sustainable approaches to managing their natural resources which provide them with food and livelihoods.
The Office of Pacific Ocean Commissioner (OPOC)serves Pacific island countries and territories who have stewardship over 40 million square kilometres of Planet Earth, – the largest oceanic continent that we call “The Blue Pacific”. It is part of the largest of the world’s oceans and as a consequence it has a vital role to play in regulating the global climate.
The ocean absorbs greenhouse gas emissions created from human activity such as industry, agriculture and transport. As a consequence the physical and chemical nature of the ocean is changing and changing at an alarming rate. For the Pacific this means significant impacts on our people and our place. The impacts related to increased greenhouse gas emissions and climate change include sea level rise, ocean acidification and more intense tropical cyclones and extreme weather events.
Recent research continues to affirm the severe impact of climate change, as well as indicating a substantial difference between global warming levels of 1.5 degrees Celsius and 2. Warming levels of 2 degrees Celsius will for example mean a much more rapid and higher global sea-level rise – 50cm by 2100 as opposed to 40cm by 2100 under the 1.5 scenario.
At 1.5 degrees Celsius, the damage to our tropical reefs would be severe, but if warming levels were to be 2 degrees Celsius or more, it would be catastrophic for our reefs and placing 98 per cent of our reefs at risk of severe degradation by the end of the century.
Researchers say that mitigation pathways with corresponding budgetary allocation can achieve a global temperature of 1.5 degrees Celsius. However the key to achieving it depends on the scale of all countries’ intentions not to just meet but to exceed their pledges under the Paris Agreement.
There has been, without a doubt, increased discussion around the interconnection between the ocean and climate change as other regions of the world experience extreme weather events like coastal inundation and flooding in new locations.
Pacific Leaders have been advocating for a more proactive approach to the threats of climate change on our ocean for more than two decades, with both national and regional commitments, such as the 2002 Pacific Islands Regional Ocean Policy (PIROP).
The implementation of the region’s Ocean Policy is guided by several regional and national initiatives like the Framework for a Pacific Oceanscape, the Small Islands Developing States Accelerated Modalities of Action (S.A.M.O.A) Pathway; Palau Declaration on The Ocean: Life and Future – Charting a course to Sustainability (2015); Future of Fisheries: A Regional Roadmap for Sustainable Fisheries (2015) and the Pohnpei Ocean Statement: A Course to Sustainability (2016).
In October this year, the Intergovernmental Panel on Climate Change (IPCC) brought together in Fiji about 100 experts from more than 30 countries to begin drafting the Special Report on the Ocean and Cryosphere in a Changing Climate.
It is the first time the IPCC is working on a focused report on the impact of a changing climate to oceans and the frozen parts of planet earth. I am pleased to see that the Pacific will be contributing through four staff of the University of the South Pacific being selected to be co-authors of this important report.
We cannot afford to be complacent on any front when it concerns Climate change, as its impact on our peoples and resources are dynamic and ever-changing. It must therefore be approached with responses which are equally dynamic and innovative and there must be no contemplation of business-as-usual – this is not an option.
We the people of The Blue Pacific are deeply concerned by the effects a changing climate is having on our people, our planet and our prosperity. We see that any and all solutions to this global problem require the resolve and commitment from us all – all peoples and all nations acting together.
As the world gathers to progress the Paris Agreement through COP23 in Bonn, the Blue Pacific asks that any solution considers the role of our oceans in mediating the global climate as well as providing for our people and planet.
This is especially important for us as 98% of what is ours is ocean. 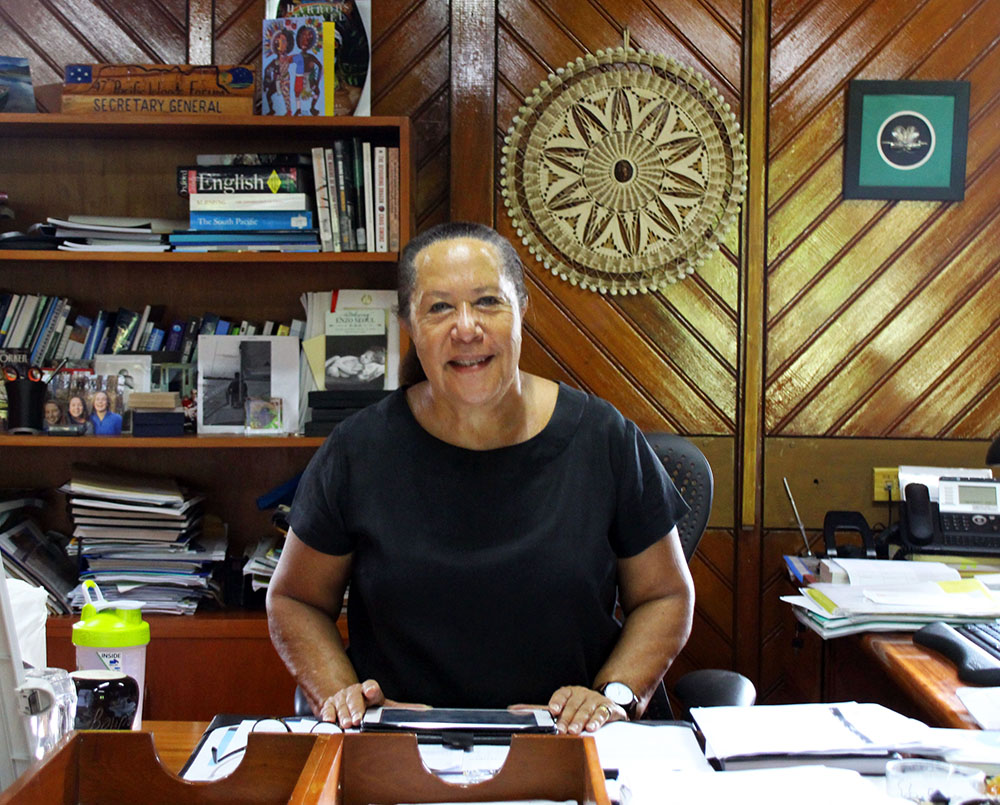