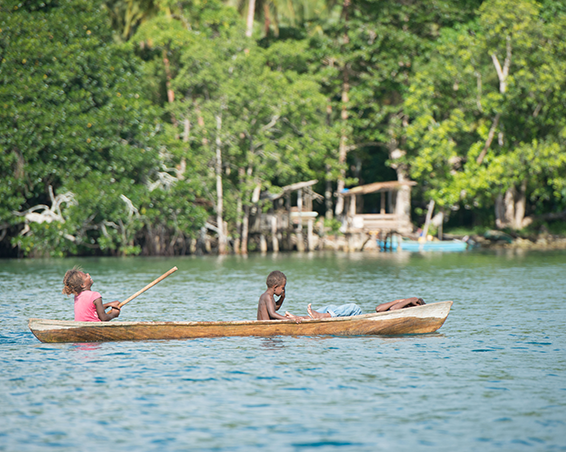 An Opinion-Editorial by Dame Meg Taylor, Secretary General, Pacific Islands Forum The opening lines of the Framework for Pacific Regionalism state: “Pacific peoples are custodians of the world’s largest, most peaceful and abundant ocean, its many islands and its rich diversity of cultures”.
However, there have been numerous times in the history of the Pacific when this peace has been violently disrupted, whether by external actors or by our own people. Throughout it all, we as ‘Pacific peoples’ through our common identity have been able to resolve our concerns amongst ourselves, and by working together.
In more recent times the Regional Assistance Mission to the Solomon Islands, RAMSI, which was formally concluded last month, is a great example of this multi-country contemporary communalism to ‘Helpem Fren’ and restore peace in the Pacific.
In the 1980’s, building on widespread protests from civil society actors, regional political Leaders established a nuclear-free zone in the South Pacific through the South Pacific Nuclear Free Zone Treaty, known as the ‘Rarotonga Treaty’. The Treaty provides for the protection our region from the various negative impacts of nuclear weapons.
The recent tensions between North Korea and the United States reminds us that important challenges remain. As observed at the recent meeting of Forum Foreign Ministers, the threat made by North Korea to fire missiles at Guam represents a threat to the entire Pacific region. While the Rarotonga Treaty has served South Pacific nations well, it may be timely to consider extending the Treaty to be inclusive of the Northern part of our ocean continent, given this recent escalation in tensions.
Another important peace and security issue facing the region are the upcoming referendums for independence in Bougainville and New Caledonia, which have both previously experienced violent conflict. As a region, we want to see the people of Bougainville and New Caledonia realise their political ambitions through peaceful political processes, and in ways that can facilitate long-standing social and political concerns through constructive and inclusive dialogue.
In addition to these traditional ‘hard security’ threats, the region is also facing a range of ‘non-traditional’ security threats, including climate change, transnational crime, and urbanisation.
Climate change poses important impacts on human security, particularly in relation to the impacts on food, water, and environmental security. Climate change can also act as a ‘threat multiplier’ where resultant human insecurity can also provide the root causes of, or triggers for, conflict.
Many Pacific Island countries argue that focusing only on these indirect and non-traditional security aspects of climate change ignores the direct impacts of climate change on traditional security concerns such as sovereignty, self-determination rights, territorial integrity and citizenship.
The related issue of forced displacement and migration due to climate change is a factor that not only has direct implications, but may also act as sources of conflict between receiving and displaced communities.
This is why both direct and indirect security impacts of climate change are a particular concern for many Forum member countries. It is why Pacific countries are leading the way in advocating for the United Nations Security Council to recognise climate change as a matter of international security.
Transnational organised crime is an increasing concern for the region. Illegal, Unreported and Unregulated (IUU) fishing continues to undermine the sustainability of our marine resources. We are also witnessing increased drug trafficking throughout our Blue Pacific region.
The rate at which urbanisation is unfolding in most of our nations and related land security issues like ballooning population growth without corresponding socio-economic growth continue to be pressing concerns. Poverty rates in urban areas are now in many instances higher than in rural areas, signalling the ‘urbanisation of poverty’; the resulting social and economic inequalities provide context for heightened crime and insecurity in our urban centres.
Economic and social inequalities are considered to be one of the greatest risks facing the world today. Indeed, in our own region, two separate pieces of research have highlighted the role that economic inequalities play in providing the root causes of conflict.
Pacific economies are already vulnerable to global financial shocks and environmental disasters, and widespread inequalities may provide an additional source of economic, social and political instability that undermine our development ambitions and priorities.
Therefore there are a range of security issues facing our region that require us to work together in order to mitigate their impacts on Pacific peoples, communities and economies. What might be some important opportunities for working together to promote and protect our peaceful sea of islands?
We know that the costs of preventing conflict are far less than responding to outbreaks of violent conflict. We must take advantage of opportunities which strengthens the Forum preventive diplomacy, to help mitigate potential triggers for conflict in our own region.
The Biketawa Declaration is an example of regional consolidation of resources to respond to a home-grown issue. The Declaration is a framework adopted by the Pacific Islands Forum Leaders in 2000, and provided for the coordination of RAMSI.
The recently-concluded Forum Foreign Ministers Meeting discussed the possibility of expanding the framework as “Biketawa Plus” – with best practices from RAMSI incorporated – and invited Leaders to discuss this at the upcoming Forum Leaders meeting in Samoa.
Security however is not all about frameworks and treaties though these instruments are indeed of fundamental importance. We need to ensure that sustainable development in our region is sensitive to conflict and insecurity.
A people-centred approach entrenches sustainability in development; it ensures that socio-economic progress is attained in tandem with political stability and environment conservation, thus addressing security issues in a preventative manner, across several spheres.
Having Pacific peoples at the core of our development agenda complements intentions, it facilitates contemporary communalism that fortifies our land and ocean resources, and by extension, our culture and wellbeing.