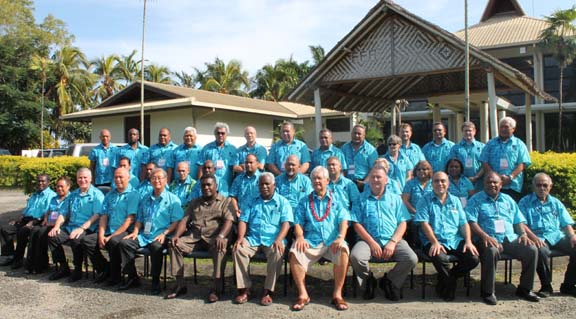 HONIARA– Forum Economic Ministers and Pacific Health Ministers committed to take proactive actions against the growing health and economic impact of the Non-Communicable Disease (NCD) crisis in Pacific Island Countries. At their joint meeting, the Economic and Health Ministers endorsed a joint statement with concrete actions to address NCDs.
“We have an opportunity to make a significant difference in addressing NCDs,” said Hon. Gordon Darcy Lilo, Prime Minister of Solomon Islands in his opening remarks to the joint meeting. “Let us be bold to try new things, and to do more than what we have done before; as outlined in our NCD roadmap.”
Around 70 percent of all deaths in the Pacific are caused by NCDs such as heart attacks, strokes, cancer, diabetes related illnesses and respiratory diseases. These are fueled by risk factors such as tobacco use, unhealthy diet, lack of physical activity and harmful use of alcohol. Trends suggest the situation will only get worse unless action is taken now.
“Today’s Joint Economic and Health Ministers meeting is a demonstration of concern, a leadership effort to face up to a very serious situation of Non-Communicable Diseases in Pacific Island Countries and Territories,” said Hon. Rick Houenipwela, Minister of Finance and Treasury in Solomon Islands and Chair of the Joint Meeting.
“It is important that collaborative efforts by Health, Finance and relevant government ministries are strengthened, reflecting stronger efforts by governments to significantly reduce the prevalence of NCDs in all Pacific countries, said Tuiloma Neroni Slade, Secretary General of the Pacific Islands Forum Secretariat. “It will require determination and political will but the alternative of a business as usual approach will cost far more, not just in the long run, but now and in the immediate future.”
“Non-Communicable Diseases cause a huge drain on our society, not only in terms of economic costs but also the effect they have on families,” said Hon. Charles Sigoto, Minister of Health and Medical Services in Solomon Islands. “More than ever before, Pacific Islanders must deal with the premature death of loved ones or a disability related to these diseases. It’s vital for Pacific Governments to act now and stop this in its tracks.”
Fortunately many of these diseases, and their associated costs, are preventable or can at least be delayed. Action is required across several sectors including finance, trade, customs, agriculture, infrastructure, education and health.The NCD Roadmap is a recommended set of actions for the relevant ministries to complement work done by Health Ministries to tackle this issue in a financially sustainable way, through joint efforts.
Countries can use the NCD Roadmap to strengthen their own plans of action so they are achievable, affordable, and suited to local contexts. The report provides more than 30 actions countries can implement with key suggestions being around improving preventive measures,increasing taxation and regulatory control to reduce consumption of tobacco and food and drinks high in fat, salt and/or sugar that leads to obesity, heart disease and diabetes.
“In Tonga, we have already taken action to raise taxes on tobacco products, high-sugar drinks and lard, in an effort to combat the negative health impacts they cause,” said the Hon. Dr. ‘Aisake Valu Eke, Minister of Finance and National Planning in Tonga. “These actions and others outlined in the NCD Roadmap provide achievable and affordable options that we can use to help reduce NCDs.”
The NCD Roadmap Report was developed at the request of the Forum Economic Ministers meeting in 2013. The Roadmap was prepared jointly by the Secretariat of the Pacific Community, Australia’s Department of Foreign Affairs and Trade, New Zealand Aid Programme, the World Bank and the World Health Organization.
“The NCD Roadmap shows a commitment by Pacific Island Governments and development partners to work together to fight this crisis,” said Dr. Colin Tukuitonga, Director-General of the Secretariat of the Pacific Community. “It forms part of a continued commitment in our region to promote healthy lifestyles and protect health.NCDs will again be looked at during the Small Island Developing States Conference held in Samoa in September this year.” -ENDS-
To download the joint statement of Forum Economic and Pacific Health Ministers, click here. For further information, contact media@forumsec.org