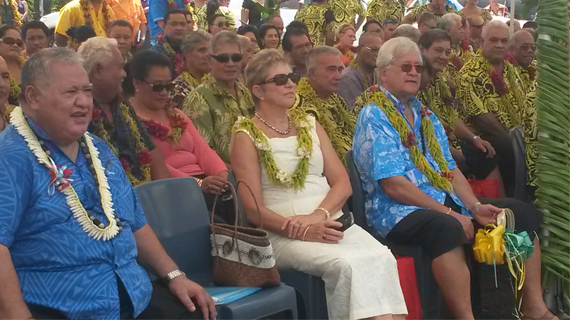 Samoa, the first country to access the Pacific Environment Community (PEC) Fund since its inception in 2010 is finally having their first solar photovoltaic grid system commissioned for use in Salelologa, Savai’i.

The installation of Samoa’s 546kWp solar PV grid-connected system is expected to provide significant benefits to the government of Samoa by reducing the use of diesel by around 190,000 litres p.a and realizing costs savings of approximately SAT570,000 per annum in a country which generates 60% of its electricity from diesel.

The project expected to last more than 20 years is spread out over 3 sites in the country’s main islands, Upolu and Savai’i.

“Today, we are opening Samoa’s first solar system, without storage, that can be connected to the grid, to run in parallel with other energy sources like diesel generators. The original combined capacity of this project is 40kWp. But we are fortunate to increase it to 546kWp through good design and project management.” said Samoa’s Prime Minister Hon. Tuilaepa Aiono Sailele Malielegaoi at the official commissioning.

The Prime Minister acknowledged development Partners for their continuous support to the development of their country. The PEC Fund is a commitment by the Government of Japan to provide ¥6.8billion (approximately US$66 million) to Forum Island Countries to tackle environmental issues. Each FIC is provided with an indicative allocation of USD$4million to support projects with a focus on the provision of solar power generation systems and seawater desalination plants or a combination of both. The fund is administered by the Pacific Islands Forum Secretariat.

For further information or to arrange an interview, please contact media@forumsec.org