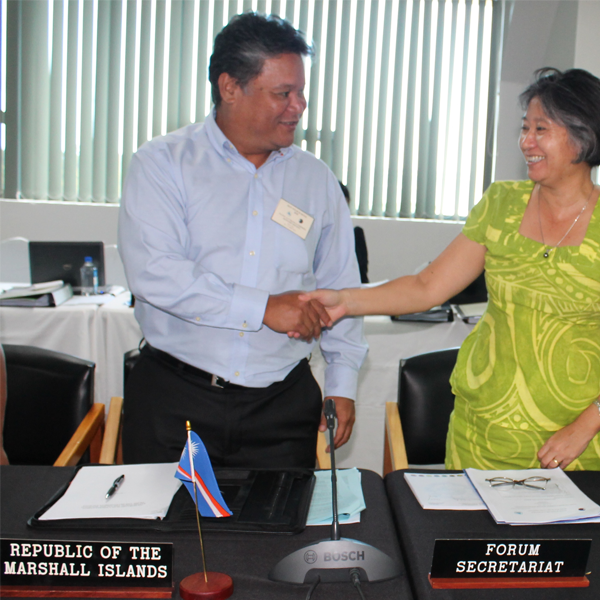 The Republic of the Marshall Islands (RMI) becomes the ninth country to sign the Memorandum of Understanding (MoU) to establish the Pacific Regional Trade and Development Facility (the Facility).
While signing the MoU on behalf of the Government of RMI, the Honorable Wilbur Heine, Minister in Assistance to the Office of the President, highlighted the importance of Aid for Trade for small island economies such as RMI. “This MoU is a positive step for RMI and the Pacific to join efforts in highlighting the importance of proper channeling of adequate aid to assist in the development of trade in the Pacific island countries,” Hon. Heine said The Deputy Secretary General of the Pacific Islands Forum Secretariat, Ms Andie Fong Toy, thanked the Government of RMI for its commitment to the MoU to establish the Facility. “The Pacific Regional Trade and Development Facility has the potential to provide regional trade-related assistance in a timely and effective manner and to enhance the ability of Pacific Island Countries to actively participate in the international trading system.”
“I congratulate RMI for signing the MoU. The Facility is expected to play a vital role in assisting development partners in coordinating their Aid for Trade resources for the Pacific region,” Ms Fong Toy added.
“The Pacific ACP region is currently in the final stages of the Economic Partnership Agreement (EPA) negotiations with the European Union (EU). Development Cooperation is an important part of the EPA. EU’s support and commitment is being sought to provide resources to the Pacific ACP States in the implementation of the EPA through the Facility,” Hon. Heine said.
He further encouraged remaining Pacific ACP States to follow suit in signing the MoU in view of the importance of the Facility in securing Aid for Trade resources.
The MOU requires just one more country signature before it enters into force.
(Ends)
For media enquiries, please contact media@forumsec.org
Background Notes:
The concept of a Trade and Development Facility originated in 2006, in the context of negotiations for an Economic Partnership Agreement (EPA) between Pacific ACP States and the European Union (EU). Pacific ACP members consider that, if well designed, structured and implemented, a Facility could have a number of advantages as an institutional mechanism to address their Aid-for-Trade (AfT) requirements. The rationale for the creation of the Facility being to improve the delivery of aid to Pacific island countries in support of the AfT agenda.
The MOU provides for the establishment of a Council as the Facility’s main policy and decision making organ and sets up the parameters for the eventual establishment, structure and operation of the Facility.
The Facility also ensures Aid for Trade assistance is delivered in a transparent and effective manner. The types of activities and programmes that will be implemented through the Facility will be those that have been identified by Pacific Island Countries as their Aid for Trade priority needs. Regional projects as well as national projects with a regional impact will be considered for funding from the Facility.