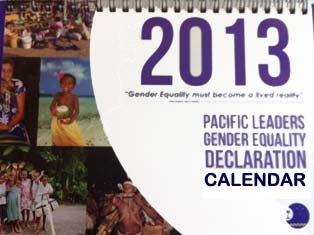 The Pacific Islands Forum Leaders’ Gender Equality Declaration adopted in August this year was the cause for celebration at the Forum Secretariat this month.

To mark the end of 16 days of activism on ending violence against women, and International Human Rights Day on 10th December, the Secretary General of the Forum Secretariat, Tuiloma Neroni Slade, launched the Pacific Leaders’ Gender Equality Declaration Desk Calendar (shown below). Noting that the United Nations Secretary General Ban Ki Moon’s message this International Human Rights day was “no matter who you are, or where you live, your voice counts”, Secretary General Slade drew attention to the many voices of Pacific women and girls and reaffirmed the Forum Secretariat’s commitment towards advancing gender equality in the region.

“The Gender Declaration speaks directly to the concerns and needs identified by stakeholders in the Pacific, and captures the aspirations we all have for a more just society, built on the respect and promotion of human rights for all.”

Secretary General Slade also called for commitment at all levels to take this important declaration forward.

“A significant feature of this landmark declaration is that Leaders commitment to strengthening consultative mechanisms with civil society on key budget and policy issues,” said Ms Fong Toy. “This is also reaffirmed the Forum’s commitment towards facilitating wider civil society engagement.”

The 2013 Pacific Leaders’ Gender Equality Calendar captures 12 reflections from Pacific Leaders and distinguished persons from the region working towards improving the lives of women, girls and women with disabilities.

The Calendars will be widely distributed to Government and civil society groups.