Outcomes of the Consultation on the 11th EDF Regional Programming 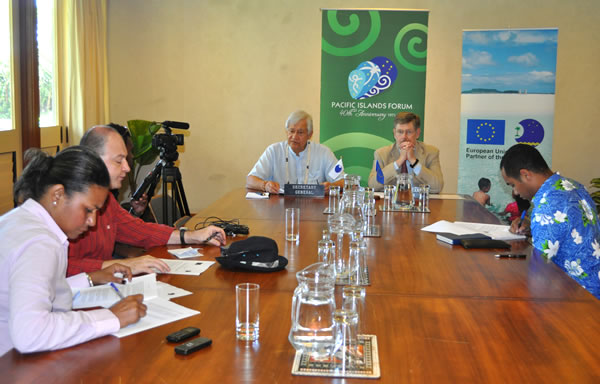 The first consultation on the 11th European Development Fund (EDF) regional programming for the Pacific region concluded today.
The meeting noted that regionalism in the Pacific has provided many success stories and that further effort is needed to build on the current achievements. “Regional solutions and support are crucial for smaller economies. For many Pacific countries, certain regional services are an extension to those provided at the national level,” Secretary General of the Pacific Islands Forum Secretariat, Tuiloma Neroni Slade said.
“The European Union is fully committed to support the regional integration efforts of the Pacific ACP Countries. The inherent vulnerability of the small Pacific islands states will be taken into account in the 11th EDF programming process,” Mr Alistair MacDonald, Acting Head of Delegation of the European Union in the Pacific affirmed.
The discussions highlighted the following key points:
• In order to improve ownership of regional projects and to maximise project impacts, regional initiatives need to be linked to the national priorities.
• An inclusive approach with effective involvement of non-state actors and the broader civil society in the programming exercise is necessary to ensure community level engagements and grassroot level participation.
• Coordination between international, regional and national implementing agencies are crucial to enhance synergies among the development partners in the context of aid effectiveness.
• Leadership and good governance in the region are essential elements that contribute to the success and sustainability of development projects in the region.
• Continued efforts to support the Pacific region’s capacity to effectively engage in the planning and execution of the development programmes are important.
• Collaboration among the ACP Countries and the Overseas Countries and Territories in the Pacific is fundamental to expand regional integration through improved sharing of expertise and technical know-how in specific priority areas.
• The Pacific Plan is the appropriate framework for determining priorities and strategies at the regional level and will serve to support the prioritisation exercise under the 11th EDF programming.
The drafting of the 11th EDF Pacific Regional Indicative Programme is expected to be completed by mid-2013 for EU approvals by end of 2013. Further consultations with key stakeholders will be facilitated.
The Pacific region thanked the European Union for its continued support for development cooperation initiatives in the region, and called for strengthened partnership between all development partners.
The meeting expressed appreciation to the Secretary General of the Forum Secretariat in his role as the Regional Authorising Officer for the EDF.
Background
Pacific ACP countries, the French Pacific Overseas Countries and Territories (OCTs), regional and international organisations, civil society representatives, European Union (EU) and its Member States as well as development partners exchanged their perspectives on the assistance needed to support development initiatives in the Pacific region.
The meeting was co-chaired by Tuiloma Neroni Slade, the Secretary General of the Pacific Islands Forum Secretariat, who is also the Regional Authorising Officer, and the Acting Head of Delegation of the EU for the Pacific, Mr Alistair MacDonald.
The Secretary General for the Forum Secretariat, in his capacity as the Regional Authorising Officer for the European Development Fund, is responsible for the programming, formulation, implementation, monitoring and evaluation of projects and programmes that are funded under the EDF Regional Indicative Programme (RIP).
The key EU policy documents that guide the EU’s engagement with the Pacific are “Increasing the impact of EU Development Policy: an Agenda for Change” adopted in October 2011, and “Towards a renewed EU-Pacific development partnership”, adopted in March 2012.
Institutions such as the European Investment Bank (EIB) contribute to the EU’s development cooperation policies. The EIB supports private sector development and can be an effective mechanism to assist in the development of businesses in the Pacific.
The current review of the Pacific Plan is expected to engage a comprehensive consultative process to further implement the Forum Leaders’ Decisions, and to develop a new common set of priorities in 2013. As such, the Pacific Plan would guide 11th EDF allocations for the Pacific Regional Indicative Programme. The different time cycles of the 11th EDF programming and the Pacific Plan review process call for necessary flexibility in the regional response.
ENDS
For media enquiries, contact Mr Johnson Honimae, the Forum Secretariat’s Media Officer on phone: 679 331 2600 or email: johnsonh@forumsec.org.fj and, Ane Zuloaga, EU Delegation Communication Attaché on phone +679 331 3633 or delegation-fiji-media@eeas.europa.eu