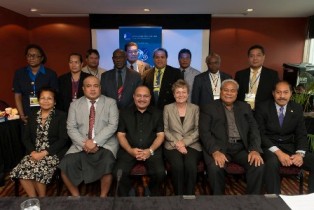 Forum Disability Ministers have expressed strong solidarity to push the agenda of disability in their countries and to make strong representations at the highest political levels within the region and globally.
This came at the end of the 2nd Forum Disability Ministers’ Meeting held in Port Moresby, Papua New Guinea, 3 – 4 October 2012.
The Ministers also recognized the important role that Disabled Persons Organizations (DPOs) play in the development of disability inclusive development strategies at national levels and pledged their support to a strengthening of relationships between governments and the DPOs.
The Ministers, in their resolutions called on the Pacific Islands Forum Secretariat to prepare draft statements on the Pacific presentations to global high level meetings such as the Intergovental Disability High Level Meeting in Incheon, Korea at the end of October 2012 and the UN High Level Meeting on Disability in September 2013.
In response to the call by the Ministers, the Forum Secretariat’s Deputy Secretary General Mr Feleti Teo, who was at the meeting, reassured them of the Secretariats commitment to realizing their resolutions and wishes.
“The Secretariat will be working in close consultation with other international and regional agencies in drafting the Pacific response which will then be passed on to countries for comments and agreements,” Mr Teo told the Forum Disability Ministers.
Mr Teo, in his closing remarks, commended the participation of the DPOs in the meeting and in particular the Pacific Disability Forum (PDF) for their coordination and support for the work of the DPOs in countries of the Pacific region.
He added: “The significant role that DPOs play in national disability inclusive development needs to be recognized and supported by governments.”
In her closing remarks at the Meeting, Senator Jan McLucas, the Australian Parliamentary Secretary to the Prime Minister and Parliamentary Secretary for Disabilities and Carers reaffirmed Australia’s commitment to disability inclusive development in the Pacific.
The Forum Disability Ministers expressed their appreciation to the Government of Australia for their support and to making the Pacific an inclusive and barrier free region to persons with disabilities thus realizing the vision of Pacific Leaders under the Pacific Plan.
In her closing remarks, Chair of the Meeting and Papua New Guinea’s Minister responsible for Religion, Youth, and Community Development, Hon Loujaya Toni re-iterated the words of her Prime Minister that the current PNG government is committed to putting in place policies and legislations to ensure the promotion of rights of persons with disabilities in the country and Ministers should expect a much more progressive report of achievements in her country at the next Forum Disability Ministers’ Meeting.
Ms Toni thanked her colleague Ministers for their attendance and hope they take back with them the outcomes of the meeting and to be committed to making the lives of people with disabilities in their countries become much more comfortable and enjoyable as they live in harmony with the rest of the population.
ENDS.
For media enquiries contact Mr Johnson Honimae, the Forum Secretariat’s Media Officer on phone: 679 331 2600 or email: johnsonh@forumsec.org.fj