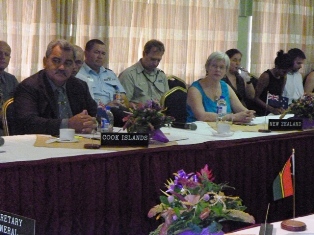 In the Outcomes Statement released at the end of their meeting, the Forum Ministerial Standing Committee noted the implementation of the SIG-RAMSI Partnership Framework to date reflected a clear expression of the collaborative working relationship between the two parties. The Joint Performance Oversight Group (JPOG), co-chaired by the Prime Minister of Solomon Islands and the Special Coordinator of RAMSI, continued to provide transparency and close collaboration between the SIG and RAMSI.
Ministers welcomed improvements across the country since the arrival of RAMSI in 2003. The Solomon Islands Foreign Minister noted that discussions around the issue of transition offered an opportunity for the Solomon Islands to review, re-assess and re-evaluate its own level of commitment to the Partnership Framework and to identify its priorities and responsibilities to ensure a seamless transition.
Ministers noted the 2011 Annual Performance Report prepared by the Independent Experts Team which reported on SIG-RAMSI achievements under the Partnership Framework, including strong economic performance.
Ministers noted that discussions were underway on the transition of assistance under RAMSI’s three development pillars to bilateral and other donors by 1 July 2013. Australia and New Zealand expressed their willingness to take up RAMSI development activities under bilateral programmes.
Ministers further noted the importance of deeper engagement with other donors, and for SIG to take the lead through existing consultation and coordination mechanisms to map out development transition priorities and responsibilities.
The Ministers underscored the importance, as the process continued towards mid-2013, of further careful consultation amongst government contributing countries, and above all within Solomon Islands. Ministers further noted that additional work was required on the part of relevant SIG ministries to identify their priorities as soon as possible.
Finally the Ministers highlighted the continuing importance of consultative mechanisms and the role of the Forum in the oversight of RAMSI. They noted that it would be appropriate to consider and make recommendations on the future of the Partnership Framework, the Enhanced Consultative Mechanism (ECM) and the FMSC, and the ongoing role of the Forum Regional Security Committee Meeting.
The Ministers also expressed appreciation to the Government of Solomon Islands for the excellent arrangements in hosting the meeting, and the warm hospitality extended to all participating delegations.
ENDS.