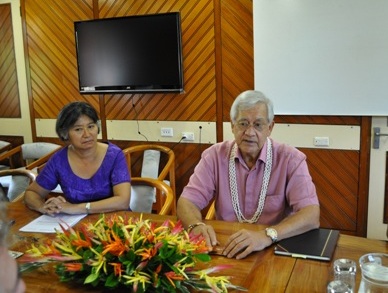 On the occasion of International Women’s Day today, the Secretary General of the Pacific Islands Forum, Tuiloma Neroni Slade says the Pacific region is at a critical cross-road in the promotion of gender equality which is Goal 3 of the Millennium Development Goals and a strategic objective in the Pacific Plan. Gender equality is crucial to the sustainable development of the region

In 2011, Leaders highlighted the importance of gender equality and agreed to intensify efforts to promote women’s equal role in decision-making at all levels, and to continue to improve advocacy for women’s leadership and the empowerment of women as leaders.

Recalling this commitment, Forum Secretary General, Mr Slade stated that when Leaders committed to this, they also recognised that women’s representation in decision making should not only be about national decision making.

“It is in our best interests to promote and ensure women’s representation on boards, executive positions in companies, organisations and the civil service. It is critical that we provide and create an enabling environment that not just supports women’s political participation but their representation. Representation and participation are two different things. Women all over the world and in our region have participated widely in political movements in times of crisis and in support of democracy, and in raising awareness about human rights but this has not translated to an increase in women’s representation at all levels of decision making,” Mr Slade said.

Last year, the Pacific Islands Forum Secretariat appointed for the first time in its 40 year history, a woman to the post of Deputy Secretary General of the Secretariat.

“I believe Deputy Secretary General Fong Toy is a role model for young women who want to embark on a career in public service at the national and regional level. Identification with role models is critical in the career decision-making process and I believe role models are especially important to women because a lack of female role models in nontraditional careers such as engineering and science. This is often identified as a barrier for women who choose to enter these professions – to all the Pacific women who have forged a career in these professions, I salute you,” Mr Slade said.

On the theme for this year’s International Women’s day which is ‘Rural Women and Girls’, Forum Secretary General Mr Slade said: “In order to improve the lives of rural women and girls and our rural communities, we need to ensure the meaningful engagement of civil society and Pacific island communities in the development process not just at the government level but also at the community level in traditional governance processes including at the village and provincial levels. There is also a strong need to support and develop institutions that contribute to creating an enabling environment for private sector-led growth and especially those with networks to rural women and communities.”

The Secretary General also recalled the commitment made by Leaders to eradicate sexual and gender based violence.

“We recognise that for women to progress at any level and in any sector we need to ensure women and girls are able to live a life free from violence. Violence in the home or community is our business and as Leaders we must develop, strengthen and implement national legislation that ensures their fundamental freedoms,” he said.