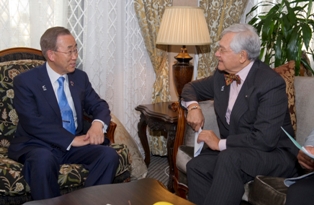 Forum Leaders made the decision at their retreat held yesterday on Waiheke Island in Auckland, New Zealand.

“I sincerely thank Forum Leaders for having confidence in me to lead their Secretariat for a second term,” said Mr Slade. “I will of course work to the best of my abilities to serve the Forum membership in pursuit of aspirations in the Leaders’ Vision for a region of peace, harmony, security and economic prosperity, so that all our people can lead free and worthwhile lives.”

Mr Slade was elected to the position for three years on 20 August 2008.

Before taking up his tenure at the Forum Secretariat, Mr Slade was elected to the International Criminal Court in 2003 for a three-year term, and served as Presiding Judge of Pre-Trial Chamber II at The Hague in the Netherlands. He then went on to practice as an International Legal Consultant between 2007-2008.

Mr Slade’s extensive diplomatic career from 1993-2003 saw him serve as Samoan Ambassador/Permanent Representative to the United Nations; concurrently Ambassador to the United States of America and High Commissioner to Canada. Preceding this, Mr Slade worked as Assistant Director of the Commonwealth Secretariat’s Legal Division in London.

Mr Slade is a recipient of Order of Samoa – Poloaiga Sili a Samoa (2005), Global Oceans Leadership Award (2003), Elisabeth Mann Borgese Medal for services to small island developing States and the oceans (2003) and Laureate, Elizabeth Haub Award for Environmental Diplomacy (2001).
He has also served as chairman of the Alliance of Small Island States (1997-2003).

The Secretary General is also permanent Chair of the Council of Regional Organisations in the Pacific (CROP).